LEGO is an investment! 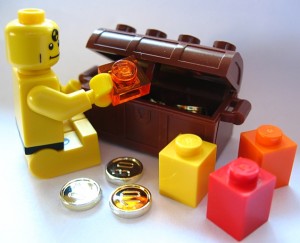 LEGO is meant to be played with. It is designed to be put together and taken apart thousands of times! It can handle a lot of use and even abuse. LEGO is not happy sitting on a shelf collecting dust.

So, do not be afraid to take those bricks out of the box and test their limits!  How tall can you stack them? How big of a creation can you build?

At the same time there is something to be said of LEGO’s long-term value. Time and time again LEGO has proven that in spite of imitators and competitors in the toy market, they have kept their value, and in fact appreciated! Generation after generation LEGO has been passed down as the toy that never gets old! Therefore there is a thriving and buzzing second-hand market for LEGO around the globe!

If you have played with LEGO as a child, and remember an old set you used to have, find it in the BrickLink database, and see how much it is going for now. You are likely up for a big surprise! There is a huge demand for discontinued LEGO sets! They are sought after like rare stamps and old wine! And not to speak of rare parts, unusual colors and rare minifigs!

So, be free to build and create! While keeping in mind that if you give your LEGO some basic, common-sense care, they will be good to you even if you decide to part with them in the future. 😉