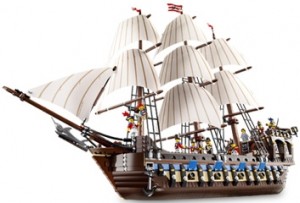 Building model-ships is a craft as old as shipbuilding itself. Ancient cultures built ship models for the same reasons we build them today; they capture the imagination with their technological complexity, beauty, and what they represent; adventure, freedom and discovery. You can read more about the fascinating history of model-ship building on Wikipedia here: All About Model Ships

Ship models built by ancient cultures were cast in different materials, including wood, various metals, leather and clay. These are still popular mediums for today’s model-ship builders, however now we can also ad LEGO to the list. 😉 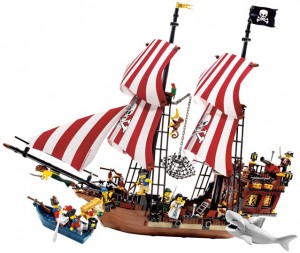 If you are itching to try your hand in LEGO ship-building, I highly suggest starting out by purchasing an official LEGO ship set. This way you pick up some serious ship-building skills and techniques really fast, then expand from there to build your own designs.

Some things to consider when building a LEGO ship:
(You can click on any of the thumbnails below for a larger view of each ship, and to take you to the creator’s own gallery.)

TYPE: Ships come in many shapes and styles, so you need to decide what you want to build; a sailboat, pirate ship, cargo ship, warships, or perhaps something out of a fantasy world? 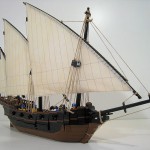 SCALE: Do you want to build LEGO minifig-scale, smaller than LEGO minifig scale (often referred to as “micro-scale”), or something really-really big? Here are some examples to get your creative juices flowing:

And here is a really big ship (yes, that’s a real person there, not a minifig!): 😀

BUILDING-STYLE: There are some specialty LEGO parts, which can help you build the hull of your LEGO ship easier. These are great for beginner model-ship builders. As you advance, you can start building the hull of your ship from LEGO bricks, slopes and other parts. 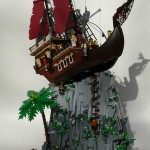 SAILS: There are some very nice fabric sails in official LEGO sets, and you can also use your own fabrics or other light materials for your ship’s sails. And, if you want to get really creative you may build your ship’s sail from LEGO bricks or plates! 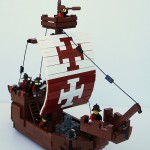 DO YOU WANT YOUR LEGO SHIP TO FLOAT?:  Many of the official LEGO ships and boats with specialty hulls are watertight and can actually float on water. Check out Bricklink for boat hulls here: LEGO Boat Hulls. Brick-built ships on the other hand are usually for display and pretend-water play only. 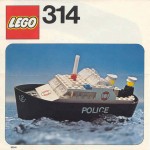 Hope I gave you something to wet your appetite for LEGO ship building! If you have a favorite LEGO ship, let me know in the Comment section and I will add them to the LEGO Ship Gallery! 😀 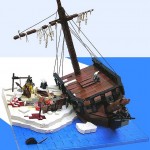