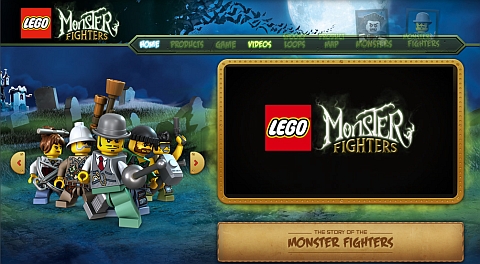 Below is the main introduction to the LEGO Monster Fighter story, thanks to SmashingBricks.com who uploaded it (along with the other videos) to YouTube. Here is how it all begins: “I’m writing this journal-entry tonight with the grim knowledge that it may be my last chance to tell the world of my newest and most dangerous mission. In just moments I will be embarking on a perilous journey into dark and scary places, where mortals and minifigures are most un-welcome…” 😈

There are also separate video-introductions for all of the LEGO Monster Fighters; Frank Rock, Jack McHammer, Ann Lee, Major Quinton Steele, and Dr. Rodney Rathbone. You can watch them below.

➡ LEGO MONSTER FIGHTERS – Frank Rock is a motorcycle-riding rebel out for revenge. His monster arch-enemy is the Swamp Creature. HOMETOWN: “I live on the edge.” STRENGTHS: wears his sunglasses at night and never back down from a brawl. HOBBIES: breaking the rules and walking away from explosions without looking back at them.

➡ LEGO MONSTER FIGHTERS – Jack McHammer is a burly lumberjack, built like the trunk of an oak. His monster arch-enemy is the Crazy Professor’s Monster. HOMETOWN: the backwoods of Scotland… or perhaps Canada. STRENGTHS: brute strength, hammer-smashing. HOBBIES: lifting things and putting them down.

➡ LEGO MONSTER FIGHTERS – Major Quinton Steele is an old-fashioned hunter, with a thirst for exotic prey, and his claw on the trigger. His monster arch-enemy is the Werewolf. HOMETOWN: Safaraway, Africa. STRENGTHS: telescopic eye, rare weapons collection. HOBBIES: target practice, weapon-polishing and going to the zoo.

➡ LEGO MONSTER FIGHTERS – Dr. Rodney Rathbone is the final member of the Monster Fighters and leader of the quest to save the world. He is an aristocrat, an adventurer, and the great-great-great-grandfig of the first minifigure who ever stepped foot in the monster-realm. His monster arch-enemy is Lord Vampyre. HOMETOWN: jolly old London. STRENGTHS: purveyor of ancient maps and very important information. HOBBIES:  saving the world from eternal darkness… and writing about it.

There is also going to be a Monster Fighters game. You can check out the trailer here: LEGO Monster Fighters Online Game Trailer. And there are some mini-games that are really fun to play. Click on the image below to play: 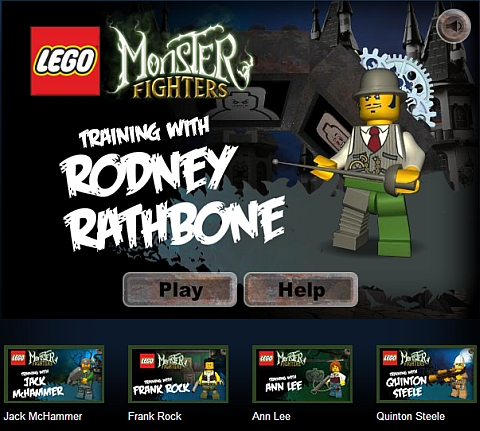 So how do you like the LEGO Monster Fighters theme so far? Interesting story? Which one is your favorite character (if any)? Share your thoughts in the comment section below. Also, you may want to check out the upcoming LEGO Monster Fighter sets here:

Next post: Fun with the LEGO Ninjago Spinjitzu cards