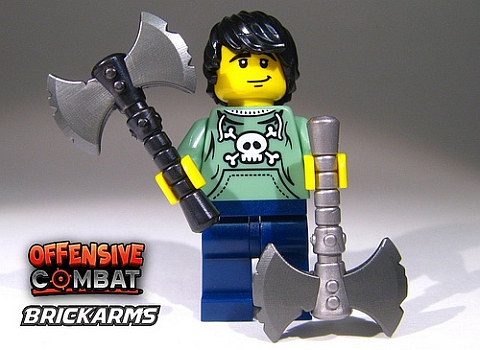 Here is the official announcement of the partnership: U4iA Games today announced that it has entered into an agreement with Redmond, WA-based BrickArms to bring several weapons from its upcoming browser-based, first-person-shooter game, Offensive Combat, to life as replicas for two-inch, building-toy minifigures. U4iA will also add a selection of BrickArms’ most popular building-toy weapons into the game as virtual items for players to use in their ongoing mission to annihilate the competition. BrickArms is a leading creator and supplier of building-toy compatible custom weapons, weapons packs, and custom LEGO minifigures. The first minifigure weapons – including the Battle Axe and Auger Shotgun, as well as in-game items – will be available later this fall. 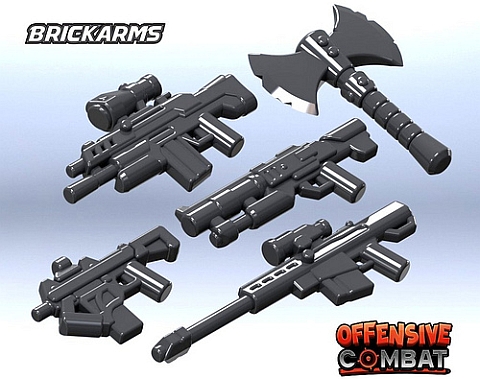 “As gamers to the core, we’ve never outgrown the excitement of seeing our video games come to life,” said Dusty Welch, CEO of U4iA. “We’ve gone to great lengths to create some of the most fantastic weapons ever in a first-person-shooter. Now, we’re doubling up the fun by creating replicas of these weapons specifically designed for minifigures. We love the work BrickArms does and believe our fans will be equally thrilled when they see some of their favorite BrickArms weapons available in Offensive Combat.”

“BrickArms fans are always on the lookout for new and exciting weapons with ‘crossover’ appeal,” said Will Chapman, founder of BrickArms LLC. “To play a game like Offensive Combat online, and then turn around and play with dutifully recreated toy replica weapons in their minifigure scaled world, is unprecedented. I am thrilled to have the opportunity to bring these high-quality toys to life, and I know they will be a hit.” 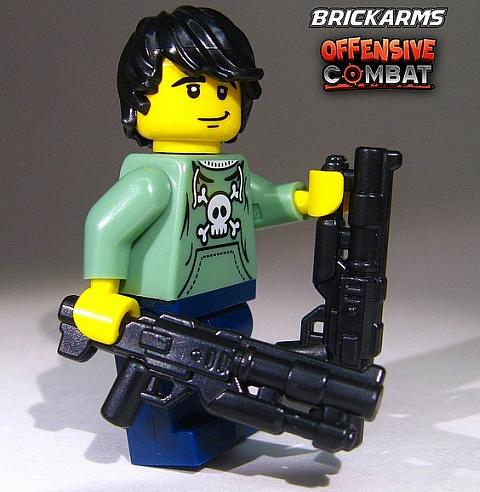 Currently in closed beta, Offensive Combat features some of the most competitive multiplayer action ever seen within a web-browser, enabling players to harness their skills and use their creativity and ingenuity to win the ultimate mash-up of first-person-shooters. The innovative gameplay and console-quality graphics, guided by industry veterans from Activision, Sony, and the Call of Duty and Guitar Hero franchises, offer an irreverent take on first-person-shooter archetypes, weapons and themes, including futuristic sci-fi, modern military, and surreal fantasy settings, among others. Offensive Combat will open up its beta program this fall. In the meantime, players can sign up at OffensiveCombat.com for a chance to enter the closed beta. Here is the official game trailer:

As far as I know this is the first time a LEGO customizer partnering up with a company to create officially licensed products. This is a huge step from the humble beginning of LEGO customizing that has the potential of opening up great opportunities to LEGO customizers and elevating the hobby to a whole new level. What do you think? Share your thoughts below! 😉

You can read more at the BrickArms section, or check these related posts: