If you are a LEGO train fan, there is a project on LEGO CUUSOO you might really like. It is a fully functional turntable for LEGO trains, motorized with LEGO Power Function elements, as well as a roundhouse. CUUSOO project creator Rasmus Fachman requested that we feature his model here as he would really like to get your feedback and support. 🙂 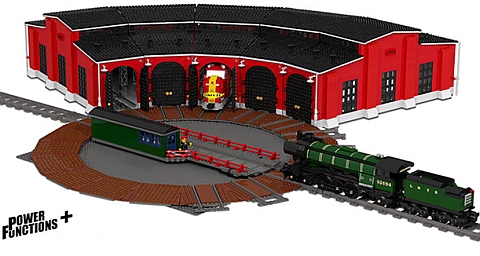 Turntables are used for trains to be able to fully turn around or sent into different directions. In locations where the trains also had a maintenance facility, the turntable is often surrounded by a building called a roundhouse where the trains can be repaired. 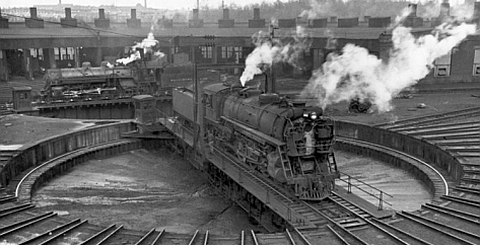 As you can imagine creating a fully functional turntable out of LEGO is not an easy task. Especially if you also want to make it look realistic. You need to find the right parts to use, and the right radius for the turntable to work properly and align smoothly with the tracks. And making the whole thing motorized is just adding perfection!

Rasmus was able to accomplish all of this after a lot of testing and tweaking, designing a beautiful turntable for LEGO trains, using only currently available LEGO parts and Power Function elements (no need for LEGO to make special parts for this project, which is definitely a plus).

The other part of this LEGO train project is the roundhouse. I particularly like this design! Rasmus made the roundhouse modular style; designing a mid-section and an end-section that can be combined to create any size roundhouse for your LEGO trains. Very impressive! 😛

The LEGO Train Turntable & Roundhouse is really a dream-come-true for LEGO train fans, especially those with a large LEGO train layout. It is impressive, functional, and does what real turntables do; get those trains sent out in the right direction.

The weakness I see in this CUUSOO project is that it doesn’t address cost or a business model that LEGO might be comfortable with. However even if it doesn’t get selected as an official LEGO project I really hope that Rasmus will provide instructions and a list of parts needed to build it. I think this LEGO train project would be perfect for a LEGO book on trains! 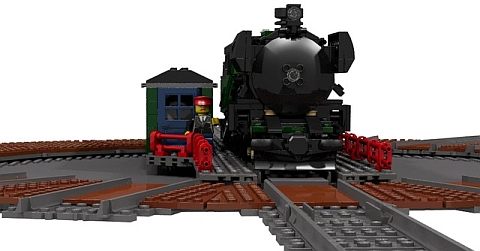 So what do you think of this LEGO train project? How do you like the design? Would you like it to be made into an actual LEGO set? Feel free to share your thoughts in the comment section below! Rasmus would love to hear your feedback! 😉

Next post: How many LEGO bricks to build a real house?