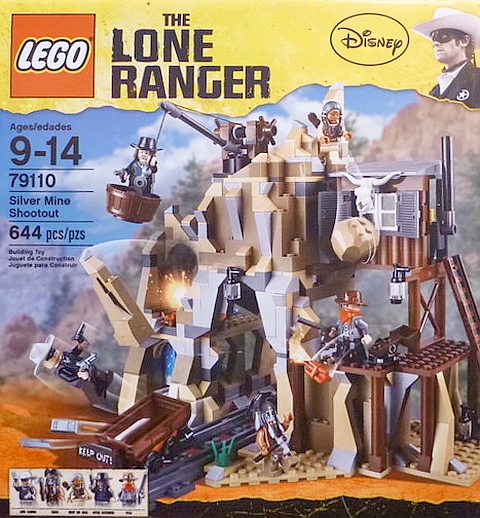 Let’s face it, if you’re going to feature outlaws in your LEGO creations, you need something to fight over. The #79110 LEGO Lone Ranger Silver Mine Shootout not only gives us that reason, but it’s a fantastic setting for all of your gun-fighting needs. On a completely different note; if you are a LEGO builder and find yourself in need of slopes for rocky outcroppings then this is the set you should pick up. It is packed with a massive amount of LEGO slopes… in fact it feels like half the set is slopes. Plus who can say no to a big brown twisty slide? The LEGO building-techniques we’ll look at in this set include a very basic but important one called “framing”, and then we’ll follow it up with a technique I was personally surprised by. We’ll call it “key-triggering” and you’ll see why below.

When buildings come together in LEGO, the most important feature is the building’s frame. This is what bears the weight of the model and allows for large sections of the design to focus on decorations. Then there are sets like the LEGO Lone Ranger Silver Mine Shootout. It is not a building, but framing becomes even more important than ever. Let’s start by examining the various platforms in the set. 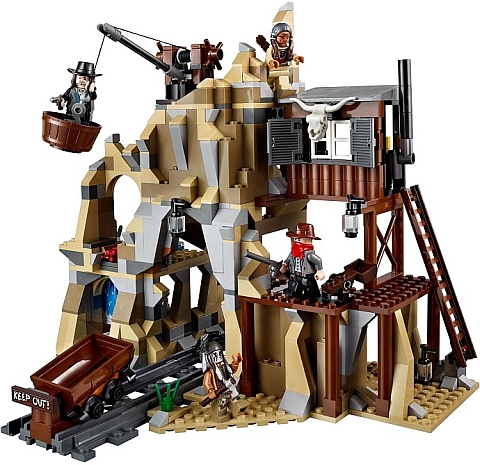 There is the running stream right under the slide, the barrel-trigger that sets off the exploding wall on the other side, and the top of the arch where the twisty slide begins. This will serve as our three examples. Notice how each platform is supported on four corners. The barrel-trigger side actually uses pillars while the stream side has many slopes disguising the underlying pillars. The end result is something that looks like a table with four legs. It’s easier to see the pillars when you have empty space between them. 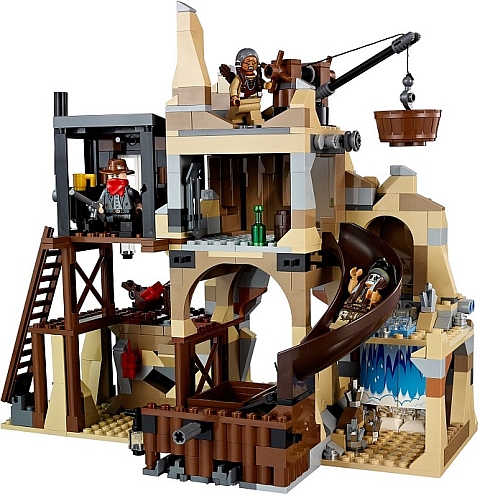 As for the top platform, its legs/pillars are the half arch pieces. So it also forms a table shape except with bowed out legs. There are even a couple of instances where there isn’t a platform above the rock-wall, but it is still framed for stability reasons. Stability is ultimately what you get from framing. As long as you know where your main supports are the rest of the LEGO model can be given over to detail work. It doesn’t matter how unconventional you make your setting, there will need to be framing so that your model has stability and can stand up correctly.

The LEGO Lone Ranger Silver Mine Shootout surprised me greatly with one of the techniques it used. If you are looking at the front of the model, right above the waterfall on the left side there is a rock-wall that can be blown away. Unlike other exploding wall elements we have talked about before, pressing the action-lever is not the only thing needed to have the explosion happening. In this case, there is a hole below the wall that you can stick dynamite in. The action-lever has a sloped end that pushes the dynamite upwards, knocking the wall off. This two-step process was not only clever, but extremely thematic. 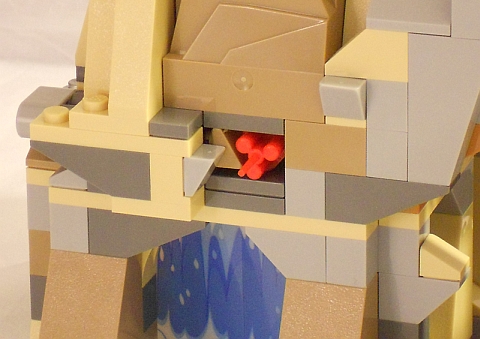 The concept is quite simple; all you need is to know where your trigger-lever ends, then leave enough space for a “key” element to fill the gap. I think the reason why this technique doesn’t get used much is because finding the right type of key that makes sense is not a simple proposition. I think the closest I’ve seen was in the #7327 LEGO Pharaoh’s Quest Scorpion Pyramid set. There you needed a sarcophagus to be in place for the lever to work and knock out a wall – same principle used in a slightly different manner. The thing that separates that action in the Silver Mine Shootout is the fact that the dynamite feels like an option rather than a necessity. There is nothing forcing you to put the dynamite in place for the explosion and because of it, there is no reason for the wall to blow up.

Framing is one of the first LEGO techniques you’ll want to master to become better at building large LEGO structures. If you need practice, I recommend creating a LEGO building just with framing. Forget the doors, windows and walls. All your attention should be on where the model feels sturdy already and where it still needs support. Once that’s done, you can go in and fill those gaps with details. (Below is a review by Nannan to show you the set.)

As for key-triggering, the important part is to pick out the right key. You will need something that makes sense for the design as well as something that would cause an action. For example, a lumber-mill might use a log for a key. It may go in and hopefully knocks over a container that has smaller pieces in the same color; the log will stay hidden in the mill while it looks like its getting cut up on the opposite end. I also recommend to continue experimenting with the dynamite and figure out other ways to use it as a key-trigger. Eventually you may be inspired to use a different key-trigger, but it will serve you well in the meantime.

So what do you think? How do you like the LEGO building techniques discussed here? Do you make sure that your LEGO projects are solidly framed? And how about adding fun exploding features with key-triggers? Feel free to share your own experiences, tips or ask questions in the comment section below! 😉

Next post: LEGO video tutorial: how to make things fly