In this series we will be going over a few basic LEGO techniques and ideas for building a good LEGO MOC (My-Own-Creation). I’ll be taking examples from several LEGO builders to give you a good idea of different styles and possibilities of the techniques covered. Unless otherwise specified however, the examples used here are mine. So let’s start at the foundation of most LEGO creations; the base and border! 🙂

For many LEGO creations the base is the first thing that needs to be built. Of course sometimes one builds a LEGO vehicle or something that doesn’t need a base. And even if you do build a base, you may start out with some of the little details and then expand around that. But wherever you start the fact remains that for most LEGO creations a base is a key component. And the most important part of a base is that it is stable, and capable of supporting the entire MOC. The last thing you want is for your LEGO creation to fall apart the moment you move it! Fortunately there are several ways of making a sturdy foundation – each of them particularly suited for a certain style or genre of LEGO building. We’ll start with the most obvious one; using a LEGO baseplate, then move on to more advanced techniques. 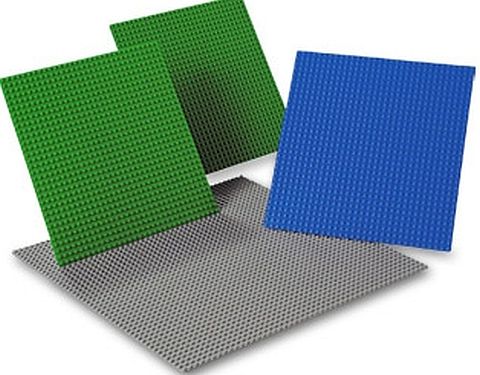 ➡ USING LEGO BASEPLATES – LEGO baseplates can significantly cut down on the amount of time it takes to build a base for your LEGO model, as they are specifically meant to provide a foundation for your LEGO creations. Pay attention to the color of the baseplate you are using though. For example, if you are using tan elements to look like sand on a green baseplate, the edges will end up looking like the sand is growing out of the grass! Not good. Below is an example of the unsightly green line I’m referring to. The overall MOC would have been much improved without it. 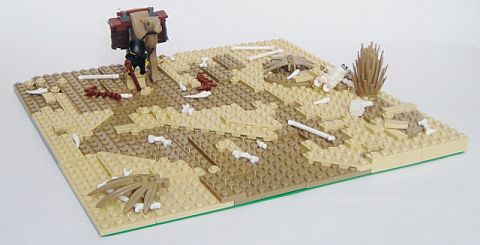 To avoid this syndrome, and if you can’t find the right color baseplate, you can attach regular LEGO plates at the edge of the baseplate – overhanging by 1 or 2 studs – and making the baseplate pretty much invisible. But this does mean that the entire base will have to go up at least a plate-height on every side, which could hamper your overall design. And of course this also means that there’s really not much reason to use a LEGO baseplate as opposed to some other method.

➡ USING A GRID-BASE – Another option for making a LEGO base is to use a grid formation, generally with something like 6-8 studs between lines. This works especially well if you want to cover an entire area with a color you don’t have baseplates for. A grid also ties in well with a border around your LEGO creation. The key is to use a color you won’t need in the rest of your model (unless you have a very large LEGO collection). I generally use red and yellow, because I have quite a few of each, and rarely use them for other purposes. Though a grid can be unstable at first, after adding plates and landscaping on top it is usually very sturdy! Below is an example of a LEGO creation on a grid-base: 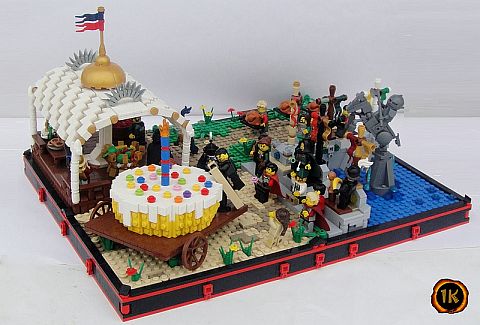 ➡ IRREGULAR LEGO BASE – Yet another possibility for your LEGO model is an irregular base. This is a base made out of LEGO wedge-plates arranged in a non-symmetric formation. While not quite suitable for a building (in my opinion at least), it works very well in a landscape-focused model. Legonardo is quite the master at this, and the example below is one of his works, but there are several other excellent LEGO creations that utilize the same technique; among them Gideon’s fantastic The Dune Sea, Blake Baericks’ amazing Swiss Family Robinson, Yacapo’s neat little Stranded…, .Bricko’s funny The truth is…, and Masa of Kaliphlin’s cute The Pretzel Thief. 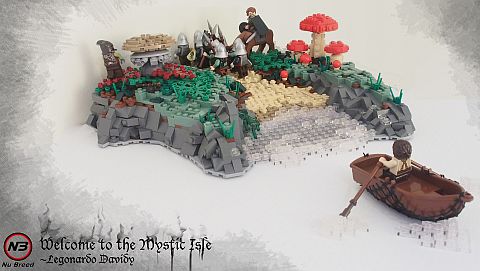 ➡ LEGO SNOT BASE – Another great LEGO base technique is SNOT (Studs-Not-On-Top), or sideways building. One way to do this is in a rectangular shape, but it also has a very nice effect when done with slopes and inverted slopes. The slope-method gives a nice combination of smoothness and angles that works well especially for snowy MOCs. Like the irregular base, slopes work best in landscape settings (rock, water, grass, snow), rather than in the middle of a town. A few examples of both types of SNOT bases are Yacapo’s Winter Traveler (slope), Si-MOC’s 40-Love (rectangular), Sirens-of-Titan’s Erebus Gate (slope), and Mark of Falworth’s A Struggle in the Swamp (rectangular).  The example below is one I built myself. 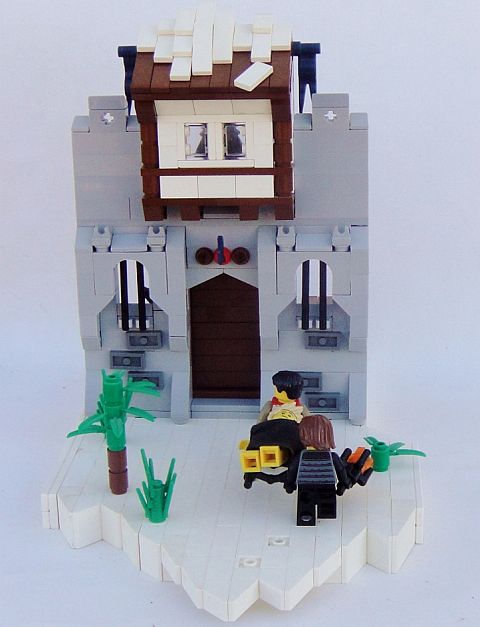 ➡ ROUND LEGO BASE – Making a round LEGO base is a challenge in and of itself, and one that isn’t attempted too frequently. Both the above mentioned irregular and SNOT techniques are useful for this, but Brick-Bending (see an article on Brick-Bending here) also works well for large MOCs, as is the case with Blake Baericks’ Ice Age: The Meltdown. For smaller LEGO vignettes, using a tire is quite a creative idea, as in K.Kreations’ New Mushrooms. Below is ‘LL’s creation called Visit, also an excellent example of a round based MOC. 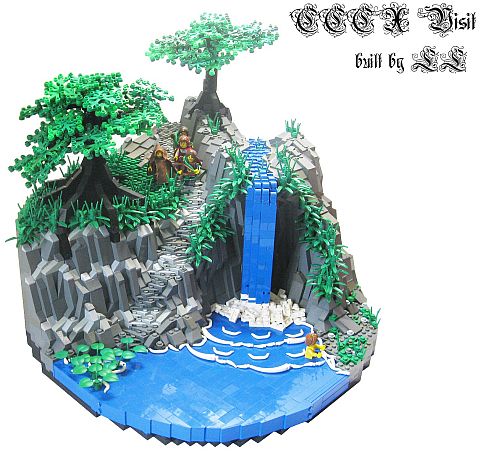 Of course there are plenty of other ways to make a base for your LEGO model, but I hope the above examples get your creative juices going! So now you’ve got lots of examples of a good LEGO base, but what about a border? Not all bases need borders – fortunately – but a border can give a LEGO creation a professional finish that a simple baseplate foundation can’t really provide. Borders can be elaborate SNOT work, or something as simple as a layer of black bricks and tiles. An example of a simple black border is Sir Edwin’s Revamping the Ruins, or cmaddison’s The Invasion of Denas Brenhinol. And a few SNOT examples are ZCerberus‘ Marecroft Manor, Masa of Kaliphlin’s Okatowan Gardens, and Ecclesiastes’ Encounter.  Below is a very original LEGO border example by eilonwy77. 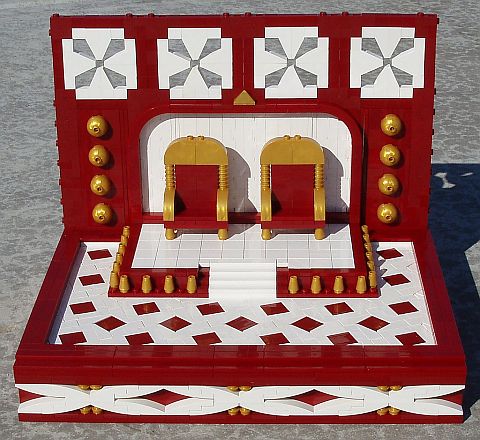 So what do you think? What techniques do you use for making bases and borders for your LEGO creations? Have you tried any of the techniques mentioned here? Are you planning to? Or have you come up with something unique and different? Feel free to share in the comment section below! 😉