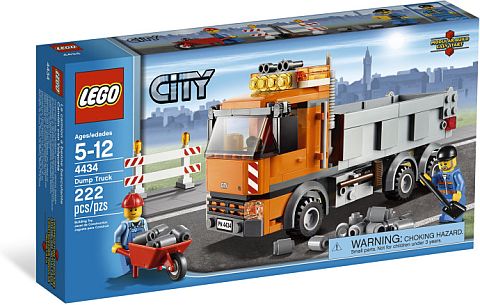 It’s not often that I get my hands on a LEGO City set. It’s not that I don’t like them; it has more to do with the fact that I’d want to collect them all – something I don’t have the room or money for. In fact LEGO City is a line that I grew up with and still love. I realize that the LEGO City Dump Truck I have chosen for this review is a bit older release – especially since LEGO City sets are replaced so quickly – but this set was one my wife won at a local LEGO convention, and I’ve been itching to put it together ever since. So let’s check out the techniques used in this set!

There is really only one feature that makes a good dump truck; the dumping mechanism. As you can imagine, for a LEGO dump truck hinges are essential to achieve this. And with more sophisticated technology comes a more elaborate dumping device. On the back of the LEGO City Dump Truck we can see a double hinging section; one hinge controls the bed, while the other set of hinges operates the release-door. This is a good example of double-hinging in action. However, if you notice there is something very distinct about the way the hinges are installed; they are hinging in opposite directions. This is because the most important thing about double-hinging is for the model to function. In this case the hinge need to raise the bed and not have the door in its way. 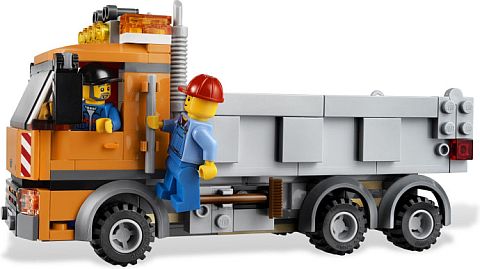 This would indicate that there is more than one way to double-hinge, and there is indeed another possibility where the hinge-sections are installed right next to one another. This style of hinge-work can be used in a functional way, but a lot more clearance is typically needed. That is why when you see this form of hinging in a LEGO model it is usually used more to form something rather than being a functional feature; like the wings of creatures or rounded curves of buildings. 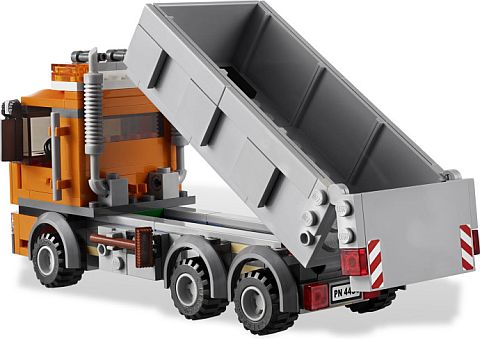 The key thing to look for with functional double-hinging is that the hinge-sections will either move in opposite directions, or move in the same direction but used as reinforcements. The LEGO City Dump Truck features both functional methods; first in the way described above, and secondly in the way the two hinge-plates operate the release-door. Form-based double-hinging will either go in the same directions or be placed alongside one another. Of course, some LEGO models will use hinges for both a functional and a form requirement; like the body of a snake or flexible tail section. Just know that these are general classifications that will help you spot double-hinging and their use.

One of the most subtle techniques used in the LEGO City Dump Truck is the stabilizing-groove. It is located directly under the dump-bed. It easily accommodates the plate that acts as the bed’s spine and keeps it secure when the bed is in the down position. This technique brings up the concept of negative space in a LEGO model. Most of the time LEGO fans use negative space to give the illusion of something; for instance a hole unfilled can be an arrow-slit in a castle, a trap in an adventure, or ventilation on a vehicle. However, when you need a spot for something to fit snuggly into, then you’re using negative space for function. 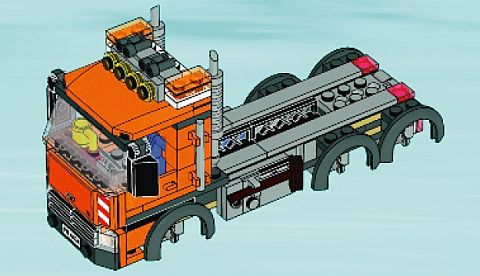 Stabilizing-grooves are very simple to add to any LEGO model; simply allow enough space for whatever you need to fit into. The trick is to make sure you’re not relying on LEGO elements that would make parts stick together; this includes LEGO elements with studs. Notice how the groove on the LEGO City Dump Truck uses large tiles while at the same time providing a deeper groove in the middle. This deeper groove is to prevent any type of suction that may occur if you made everything too flush. Ultimately they are giving a stabilizing presence to prevent movement in unwanted directions. In this case, there is no side-to-side motion of the dump bed.

Double-hinging is often the key to unlocking some fairly unusual LEGO creations. It naturally breaks up the straight lines inherent in LEGO elements. There is no real right or wrong way to use double-hinging. However, if you find you’re having trouble with it because you want the hinges to provide both form and functional aspects, you may consider slimming your idea down to fit one of these criteria first.

Stabilizing-grooves are not commonly needed in things like LEGO buildings. However moving LEGO models like vehicles are a different story; there is no greater test to your LEGO creation than moving it around and see what happens; if you find pieces keep falling off, you may consider taking a look at using a stabilizing-groove. 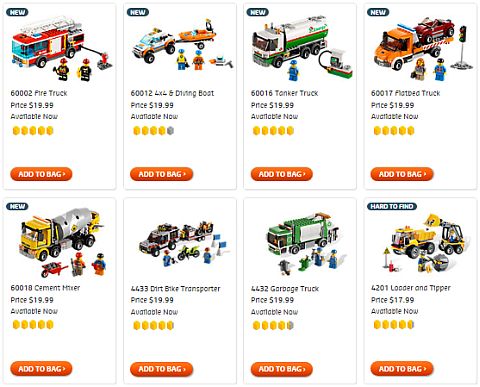 So what do you think? How do you like the LEGO building techniques discussed here? Do you use hinges to add form and functionality to your LEGO models? And how about using stabilizing-grooves? Feel free to share your own experiences, tips or ask questions in the comment section below! 😉

Next post: Win a LEGO Back to the Future DeLorean!