Building with LEGO – customize your minifigs

by Thita (admin) on October 2, 2013
in Building Techniques

In this series we are going over a few basic LEGO techniques and ideas for building a good LEGO MOC (My-Own-Creation). I’ll be taking examples from several LEGO builders to give you a good idea of different styles and possibilities of the techniques covered, though unless otherwise specified, the examples are mine. We’ve already covered Building with LEGO – Bases & Borders, and also Building With LEGO – Beautiful Landscaping, so now we’ll cover minifigures! We’ll talk about the art of combining minifigure parts, minifigure posing, and then other uses for basic minifigure parts. 🙂

➡ LEGO MINIFIGURE COMBOS: As you are probably aware, most LEGO minifigures come ready to be assembled, fitting the environments they were designed for.  But these minifigures aren’t always the “coolest”, and sometimes (if you were trying to build a renaissance era MOC for example) the available “official” combinations don’t quite work. And on other occasions, it’s just nice to create a unique minifigure for whatever it is you have in mind. Of course, a lot of minifigure combinations are  subjective; I might think a particular minifig head is perfect for an occasion, but you might not like it at all! Still, there are a few general techniques that can be helpful. 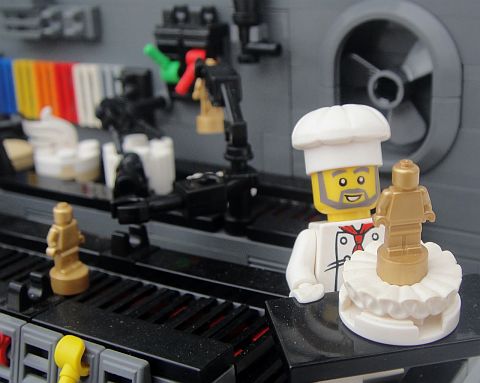 Usually, taking minifigure pieces designed for one theme (for example; a LEGO Power Miner’s torso), and incorporating them into a totally different theme (say; Classic Middle-Ages Castle), doesn’t work so well. When you hit on something like that, it’s probably a good idea to ask someone else, “Does this combination look good?”. This way you can be sure you’re not just seeing what you want to see! On many occasions, tying a particular color (or two complementary colors) in both the top and bottom of a minifigure (say red pants and a red hat) helps with the overall look.

And be sure you keep an eye out for clashing printed details; having something like two belts can really mess the combination up! Don’t be afraid to take hands and arms out of torsos, or even legs out of pants (though I wouldn’t suggest pulling too hard!). And of course, there is a entire world of LEGO customization and customizers, which opens up a whole host of possibilities! 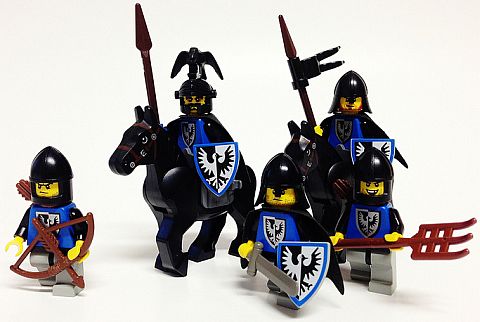 Examples of excellent minifigure combos are Simon of Nalderick by Simon S., Black Falcons by Julius No, Mitgardians by Ecclesiastes, and Soldier of the Queen by Mark of Falworth.

➡ LEGO MINIFIGURE POSING: Posing is another important aspect of minifigure usage in a MOC. Typically, a minifig (unless you’re recreating a statue) with everything all straight doesn’t look very realistic. Usually, you can plant a minifig on two studs and then twist a little, which will probably give it a bit more natural posing. It’s also unusual for someone to hold their arms straight down, so moving them up helps as well. Keeping the arms up even higher and rotating the hands slightly helps indicate that a minifig is talking. 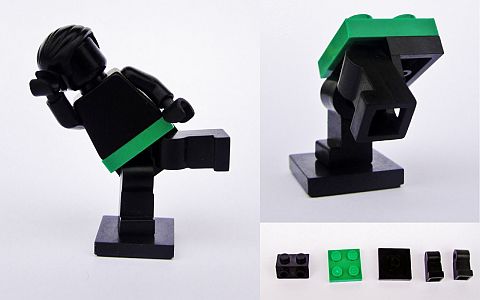 But a great deal more can be done to improve a minifigure’s pose than just this! As you may have noticed, it’s rather difficult to get a minifigure to hold something in both hands. And it’s virtually impossible to get both hands to touch each other – unless you take the arms out! Once both arms have been removed and attached to an accessory (a rifle, for example), they can be rotated inwards until almost in the sockets, which will keep the arms stable, as in the example below by Mark of Falworth. 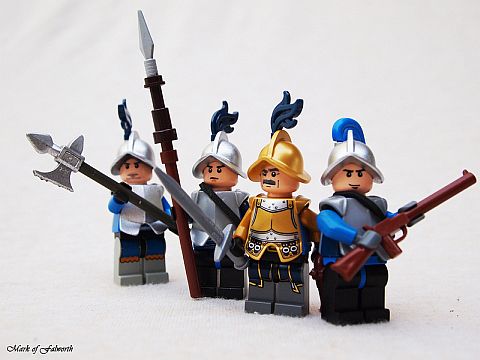 Some people manage to achieve the same basic effect using a LEGO rubber band (I never have). When a figure is laying down (sleeping, swimming, dying, etc.), taking out arms and even sometimes legs adds articulation. Just be creative with your minifigures – there are dozens of fascinating possibilities! (For example, here I used a shovel to attach the arms and legs and rest the head.) Below is an example of an innovative minifigure pose by Digger1221, using a pair of handcuffs to attach the arms. 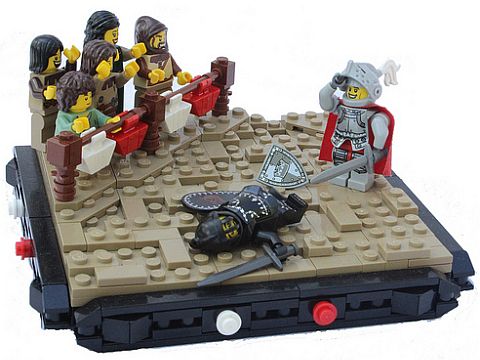 ➡ OTHER USES FOR MINIFIGURE PARTS: Minifigure parts may seem fairly specific and difficult to use for other things, but in reality they are quite useful, with hands being the most versatile. They work for everything from coat-racks to rugs – but we’re getting ahead of ourselves here! 😀

Almost all minifigure parts (and I’m confining myself to body parts; head, torso, arms, hands, pants and legs) are useful in large brick-built animals. Heads make nice rounded ornaments, but do be careful not to expose the facial expression! Just imagine a skeleton face peeking out of your ornate balcony! Legs are also useful for furniture; they add a nice rounded touch. Below is a very clever example by mijasper. 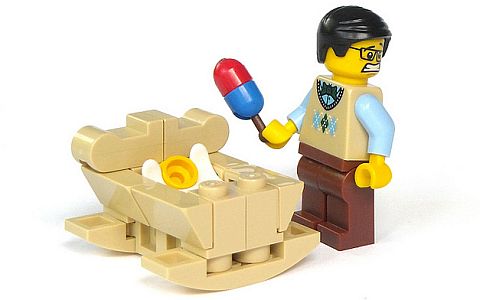 As I mentioned, I find minifigure hands the most useful. Yellow hands make great hay, brown ones work well as driftwood, green ones make good grass, and all different colors work well as levers. They are good for furniture that need small legs, and for all sorts of tiny designs requiring small rods. I personally have found them good for birds, greenery, roofs, hay, levers, flags, and a host of other things. Probably the use I was most pleased with was as a rug (though I got the original four hand technique here); the four hands held together well enough to let me arrange them in a design! 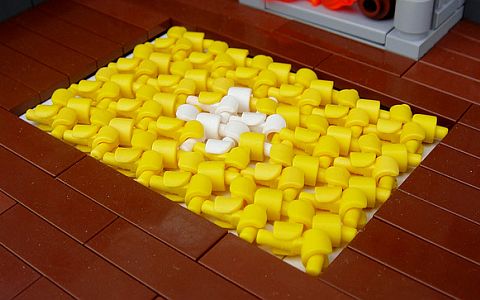 So these are just some creative ways LEGO minifigures can be customized and even used in unusual ways. How about you? How useful do you find minifigures? Do you enjoy creating your own unique combinations? Have you been inspired by some of the techniques and ideas above? Feel free to share your thoughts and questions in the comment section below! 😉