In a previous article we have looked at how to identify the minifigs in the Series 11 blind-bags (see: Guide to Feeling for LEGO Minifigs Series 11), and in my last post I reviewed closely the Barbarian, the Diner Waitress, the Evil Mech, and the Welder from the series (see: LEGO Minifigures Series 11 Review – Part 1). Today I will show you in detail the Yeti, the Pretzel Girl, the Constable, and the Scarecrow.

So let’s start with the LEGO Minifigures Series 11 Yeti. He is my second favorite from this series, along with the previously reviewed Barbarian. His headpiece is very unique, and it gives him the extra bulk necessary for cold climates. His teeth are sort of yellow; he must have been having too many popsicles and haven’t been brushing his teeth. He doesn’t look very scary at all!

If you take off the Yeti’s headpiece you will see that he is kind of chubby. Yup, definitely too many popsicles! The front of the torso and legs are printed to make him look furry (and fat), but the back of the torso isn’t, which is not a problem as the headpiece covers it anyway. The popsicle is a new color, and for me this is the first one I got, so I’m very excited about it. I wish I could get a bunch more without having to get more Yetis! 🙄

Now let’s look at the LEGO Minifigures Series 11 Pretzel Girl. First I wanted nothing to do with her (except for her pretzel), but then my little sister got one and I actually find her to be pretty cool. My favorite part is still the pretzel, but she also has a new hairpiece with two braids. Her head is nice with freckles and her lipstick isn’t smothered all over the place like on some other LEGO girl heads – I won’t mention names). She is wearing a traditional Bavarian dress with a special cloth skirt, matching the Bavarian Guy (also with a pretzel) in LEGO Minifigures Series 8. The Pretzel Girl also comes with printed shoes, which wasn’t really necessary in my opinion. 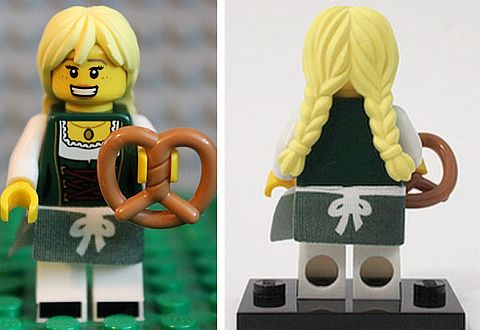 It’s time to honor the LEGO Minifigure Series 11 guy who has been keeping LEGO City’s streets clean, crime low, and traffic under control; the Constable! He is my third favorite minifigure in this series. His bobby helmet is a new LEGO piece, easy to identify in the blind baggies by its unique shape. There are six Constable minifigs per full box of Series 11 Minifigures, so you should definitely be able to get him. The helmet is nicely printed, so is the front of the torso. The back is not printed. The facial printing includes the strap for the helmet – a nice addition. The legs are just plain black. 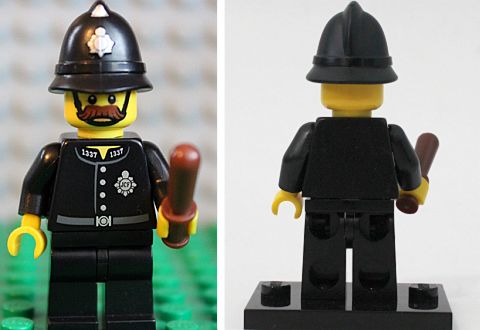 Now let’s talk about the LEGO Minifigure Series 11 Scarecrow. Names can be deceiving, can’t they? Like the Scarecrow isn’t really scary – at least this bird doesn’t think so. The hat is a very nice new piece, with a whole on top for the bird to attach to. The bird isn’t new; it first appeared in the LEGO Lone Ranger theme, but it works great in this application. The hat also has a patch, and a rope tied around it. 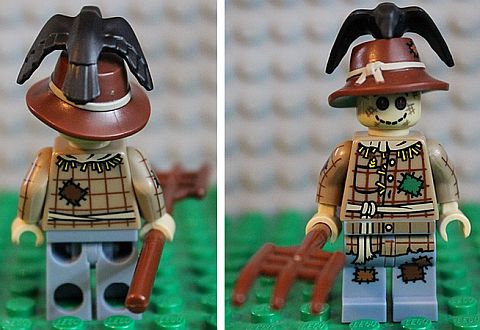 The Scarecrow’s head got a smile instead of a frown – which is probably why birds aren’t scared of him. The face made to look kind of beat up; with a stitched smile and eyebrows, and eyes made of buttons. His shirt looks like a farmer’s old flannel shirt with patches and straw sticking out here and there. If you look at the pocket you will see a reed sticking out. The back is also printed, continuing the same design elements. The legs are also printed, with the bottom of the shirt (it’s a bit too big for him!) and more patches legs. The pitchfork isn’t new, but if you’re like me, you can always use another one. Out of all of LEGO Series 11 Minifigures I think the Scarecrow has the most detailed design and the most work put into him. A wonderful (and rare – only two per full box) minifigure for sure!

That wraps up Part 2 of my review of the LEGO Minifigures in Series 11. So what do you think? Do you have a favorite out of the eight minifigures featured so far? Or do you prefer some of the other minifigs in the series? Feel free to share your thoughts in the comment section below! Also, I’m a KFOL (Kid-Fan-of-LEGO) and this is my second post here at theBrickBlogger. Hope you enjoy! Thanks for reading, and feedback is welcome! 😉