Let’s continue with our review of the minifigs in LEGO Minifigure Series 11 that got released recently. This is a particularly nice series with some very interesting minifigures and unique accessories; a Diner Waitress, a Yeti, a Gingerbread Man, a Holiday Elf, a Female Scientist, a Grandma, a Pretzel Girl, an Evil Mech, a Welder, a Constable, a Barbarian, a Scarecrow, a Tiki Warrior, a Jazz Musician, a Lady Robot, and a Mountain Climber. A great selection, isn’t it? 🙂

In a previous post we have looked at how to identify the minifigs in the Series 11 blind-bags (see: Guide to Feeling for LEGO Minifigs Series 11), and in the first part of this article I reviewed closely the Barbarian, the Diner Waitress, the Evil Mech, and the Welder (see: LEGO Minifigures Series 11 Review – Part 1) and in the second part we talked about the Yeti, the Pretzel Girl, the Constable, and the Scarecrow (see: LEGO Minifigures Series 11 Review – Part 2). Today I will show you in detail the Gingerbread Man, the Holiday Elf, the Grandma, and the Female Scientist.

So let’s start with the LEGO Minifigures Series 11 Gingerbread Man. This is probably the most imaginable minifigure the LEGO group has ever come up with. The head is a brand new piece, that I’m sure will be used in many interesting LEGO creations. The facial printing is made to look like icing and is kind of mischievous. If you look closely, you can see tiny pieces of spices on the torso, head, and legs. That is an amazing amount of detail for one minifigure! I would have also added gumdrops, although that may have been overdoing it. 🙄 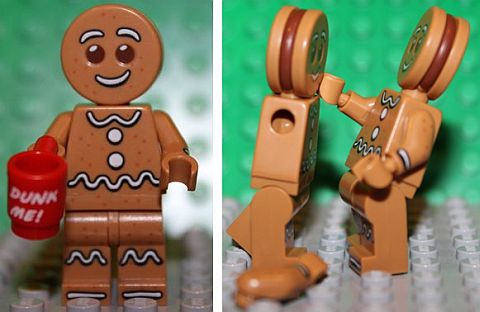 The Gingerbread Man has no back printing, but he really doesn’t need it. The legs have some more icing-like detail. He only comes with one accessory; a coffee-mug that says “Dunk Me!” I think the Gingerbread Man is my favorite minifigure from Series 11 along with the Yeti. I already got two; I hope they don’t devour each other! 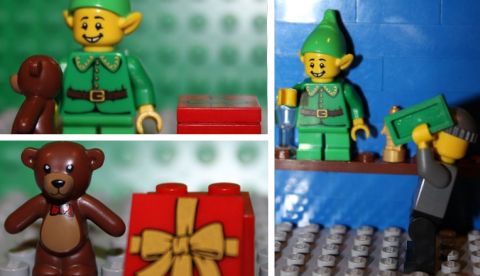 The hat and the legs are bright green, while the torso is regular green. The torso printing is not too detailed, but for an elf it is perfect. The Holiday Elf comes with two accessories; a teddy-bear which is similar to the teddy bear of Sleepyhead from LEGO Minifigures Series 6, and a big red box with a golden bow printing. 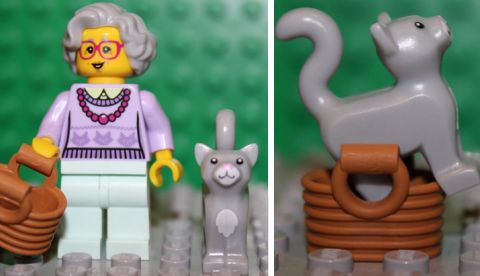 Grandma’s shirt indicates she is a cat-lover, with its three cat heads on it. It certainly looks like a grandma sweater. Her pants are light-aqua – a new color that first appeared in the LEGO Friends sets. Grandma comes with two accessories; a basket and a cat. The basket is not new, but the cat is. And she can even fit in the basket – well, sort of…

And last but not least; the LEGO Minifigures Series 11 Female Scientist. She is a perfect companion for the Mad Scientist from Series 4 or Mr. Good & Evil from Series 9. Her hair is the same as the Zookeeper’s from Series 5, but a darker brown. Her shirt has a nametag that says “Professor Bodin”. There must be a designer on the LEGO team with that name! 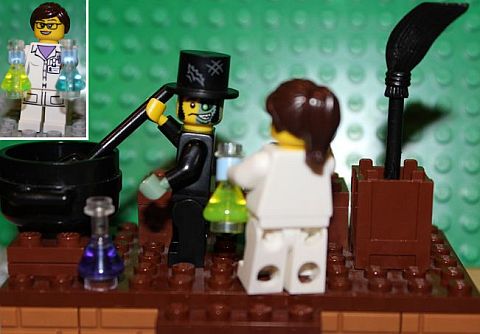 The legs of the Female Scientist are also printed with pockets of her lab-coat. She comes with two potion-bottles with different color concoctions – who knows what they are for, but she seems pretty happy about them! 😈