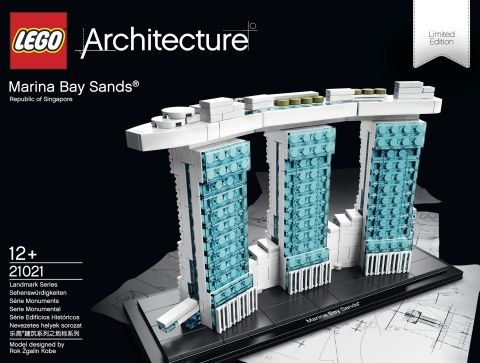 Marina Bay Sands is a casino-resort in Singapore with a luxury hotel, state-of-the art convention and exhibition facilities, theatres, entertainment venues and a wide range of shopping and dining retailers. It is best known for its infinity-pool way up on top of the 57-story hotel – providing an incredible experience of just floating into the skyline or the city below. It was designed by Moshe Safdie and opened in 2010. You can read more about it on Wikipedia here, and you can also see some excellent pictures here. 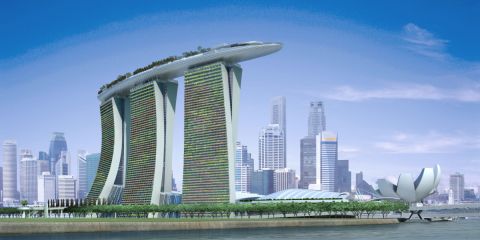 Below is the official press-release of the #31021 LEGO Architecture Marina Bay Sands that tells you a bit more about the resort and how the LEGO version came about. 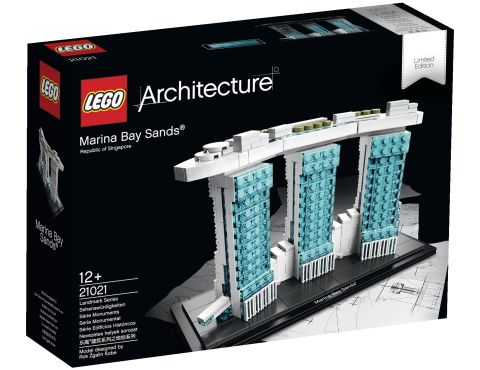 One of the most amazing achievements that man has ever attained is the mastery of structural engineering through great architecture. Celebrating these masterpieces through its Architecture series, The LEGO Group officially iconize Marina Bay Sands, a state-of-the-art modern day marvel, with its LEGO bricks.

Voted as one of the most inspiring structures of recent times through an online poll on the LEGO Architecture website, this model focuses on the signature hotel complex that showcases the three towers and the Sands Skypark which is the centerpiece of Singapore’s skyline and urban renewal strategy today. The integrated resort, designed by renowned architect Moshe Safdie, opened in April 2010 and has welcomed 38.5 million visitors in 2012 alone.

“It is an honor for Marina Bay Sands to be selected as Singapore’s landmark to be interpreted with iconic LEGO bricks. Marina Bay Sands is often viewed as a piece of art with our striking architecture and the Architecture Series will allow guests from all over the world to bring a piece of Singapore landscape back home with them. LEGO has been inspiring people with the unlimited possibilities of arranging the bricks and we hope to continue this with the Marina Bay Sands set,” said Maunik Thacker, Senior Vice President of Marketing, Marina Bay Sands. 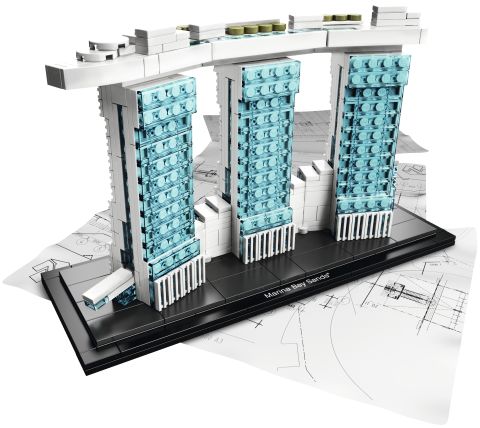 As you can imagine, recreating such a complex and curvy building in LEGO was not an easy feat! Which for LEGO fans means a very interesting building experience. In fact, the entire complex is sitting on a smoothly tiled base with nothing but 4 studs and 2 Technic pins sticking out. This doesn’t mean that the final model is not sturdy, but simply indicates how much outside-the-box Rok Kobe had to think to make a realistic replica of this building structure. 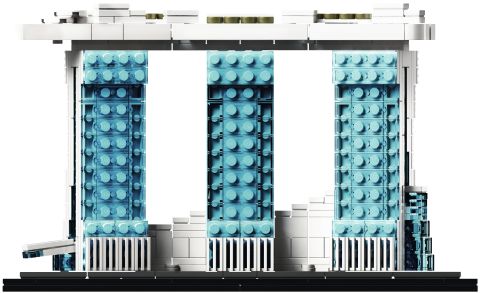 I don’t want to spoil the building experience for you with all of its surprises, but there are lots of sideways building and clever detailing going on here with nothing overlooked or spared. It also has the same gorgeous white and trans-blue colors as the UN Headquarters. Standing on a shiny black base with printed name-tiles, it is another beautiful display model that would look great on anyone’s desk or shelf. 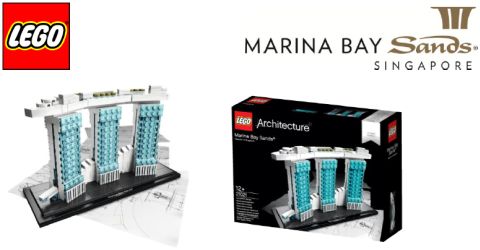 The #21021 LEGO Architecture Marina Bay Sands set comes in the same high quality and sturdy black box as other LEGO Architecture sets. The instruction booklet is printed on very high quality shiny black paper and includes the history of the structure as well as all the building steps for the LEGO model. This is also standard for LEGO Architecture sets (I wish all LEGO sets would come with such high quality instructions and in such a sturdy box, but that’s another story). My set also came with a very uniquely designed outer box that I believe is only included with press-kit versions of the set; with a CD including the press-release as well as images of the set. 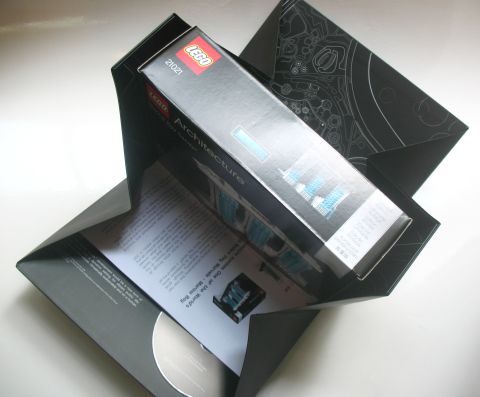 I can’t say anything negative about the #21021 LEGO Architecture Marina Bay Sands, it is beautiful and provides a great building and learning experience for LEGO fans who enjoy more advanced models. Well, actually there is one negative thing; as mentioned before, this is a very limited LEGO Architecture set, with only 10,000 released and only in Asia. If you want to get one you either have to visit Singapore yourself, find a friend who is willing to bring you one, or get one on the secondary market. You can also download the building instructions here. And here are the current listings on eBay: LEGO Architecture Marina Bay Sands on eBay

You can also check out the currently available LEGO Architecture sets at the Online LEGO Shop. These are not limited sets so they are easier to get and can provide just as much fun and learning. I especially recommend the larger, more complex sets. 😀

So what do you think? How do you like the LEGO Architecture Marina Bay Sands? Is this a model you are interested to get? Feel free to share your thoughts in the comment section below! 😉