Yabba dabba DOO! The Flintstones is considered the second greatest TV cartoon of all time (after The Simpsons). It was an incredibly fun and creative show featuring a regular family with modern amenities and problems, but in the stone-age. I haven’t seen a whole lot of Flintstones LEGO creations, but there is one on LEGO CUUSOO that I think is worth supporting, or at least checking out. 🙂 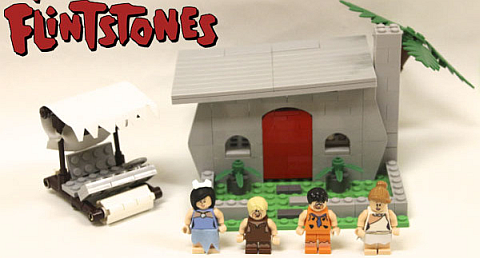 The LEGO Flintstones project was initiated by CUUSOO member jjbuilding2, in an attempt to bring the Land of Bedrock to life in LEGO form. It includes The Flintstones’ house, family car, and the four major characters of the show: Fred & Wilma Flintstone, and Barney & Betty Rubble. 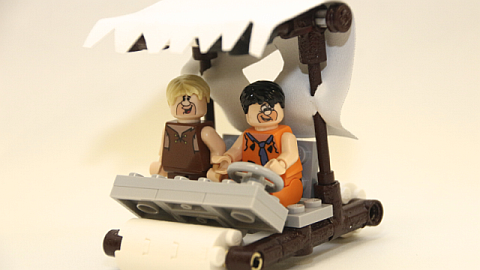 I really like the shape of the house. I think it captures the character of The Flintstones’ home really well. The family car is also excellent. The character’s themselves were printed by UK customizer minifigs.me and look perfect.

I don’t know how popular The Flintstones are these days, but I think it has a lot of potential to be a fun LEGO theme either as a one-set special (like this LEGO CUUSOO project) or as a full line with many sets. The characters are funny and the potential for wacky vehicles mixed with dinos sounds like a lot of fun.

If you are interested in The Flintstones LEGO project, and you would like LEGO to consider making it into a set you can vote for it here: VOTE FOR LEGO THE FLINTSTONES. And even if it doesn’t become an official LEGO set, this project can give you ideas for some fun LEGO creations. 😉

What do you think? How do you like the LEGO Flintstones project? Is this something you would be interested in? Or do you think The Flintstones is too dated and there wouldn’t be enough interest for a LEGO set? Feel free to share your thoughts in the comment section below! 😉