Due to Benny’s influence from The LEGO Movie, it seems like everyone these days is into building SPACESHIPS! I have found this really sweet little spaceship the other day from Nick Trotta (who’s ID picture is – very appropriately – a blue LEGO Classic Space guy), that I thought to share with you, so check it out! 🙂 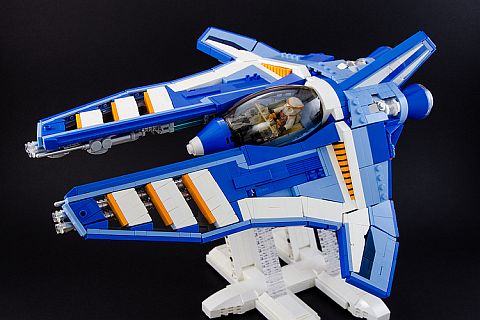 This spaceship was actually built for Novvember 2013. No, that’s not a typo, Novvember refers to Vic Viper month; a yearly tradition started by the late nnenn, and is continued to be carried on by LEGO Space fans since nnenn’s tragic passing. Vipers have a very distinct shape, as you can see here. In fact, there is also a great example of a viper in the #7066 LEGO Alien Conquest Earth Defense HQ set, designed by Mark Stafford, which is also a tribute to nnenn with his name printed on the wings (photo by polywen). 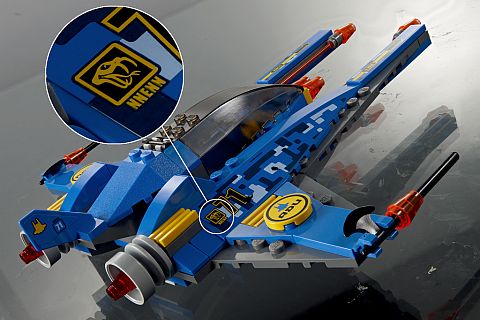 Going back to our lovely blue, white and orange viper by Nick Trotta, he named it the Solar Striker 3V, and it is full of amazing details, beautiful curves, and innovative uses of LEGO elements. Due to popular demand Nick also posted a video online (see below) showing how the Solar Striker is assembled – in case you want to build one for yourself. Also, Nick has some other very beautiful vipers and other LEGO Space creations, so make sure you check out his flickr gallery.

So what do you think? Do you like to build LEGO spaceships? How about vipers? And what do you think of the Solar Striker? Did any of the details catch your eyes; something that you would like to incorporate in your next LEGO creation? Feel free to share in the comment section below! 😉

Next post: LEGO CUUSOO Doctor Who & The Big Bang