We have talked about the LEGO Legends of Chima summer sets as they were revealed at the various toy fairs earlier this year, however now that official images are available it is a great time to revisit them. There is are a whole bunch of new animal tribes coming, as well as some really interesting sets. So let’s take a look! 🙂

➡ #70141 LEGO Legends of Chima Vardy Ice Vulture Glider – Evil Vardy has stolen the CHI and is escaping in his super-cool Ice Vulture Glider! Strap Lundor into his weapon station and fight ice with fire using his smoking-hot armory. Watch out for the glider’s huge wings and ice-blue claws and evade the dual flick missiles fired from either flank. But beware – just when you think you’ve got Vardy trapped, he could detach his flyer and speed away with the precious CHI! Includes 2 minifigures with assorted weapons: Vardy and Lundor. 217 pieces. Price: $19.99 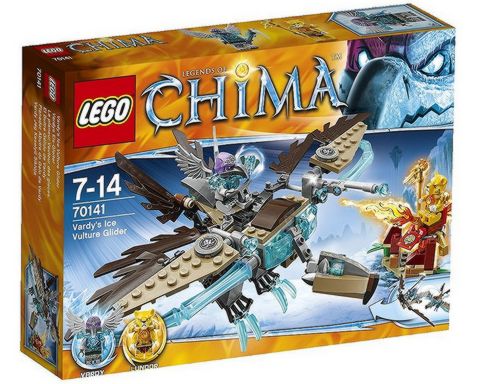 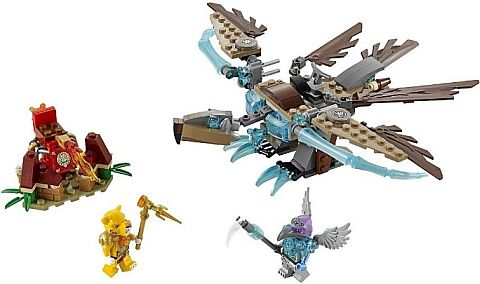 ➡ #70142 LEGO Legends of Chima Eris Fire Eagle Flyer – Lagravis has been imprisoned in an ice cage by cold-blooded villain Strainor who has taken his CHI. Zoom to the rescue with Eris on her magnificent Fire Eagle Flyer. Place Eris at the controls and launch into the sky. Then enter fire CHI power mode to speed high above the Kingdom of Chima. When Strainor is in your sights, fire the missiles to send him scurrying for cover and free your tribal ally. Includes 3 minifigures with assorted weapons: Eris, Lagravis and Strainor. 330 pices. Price: $29.99 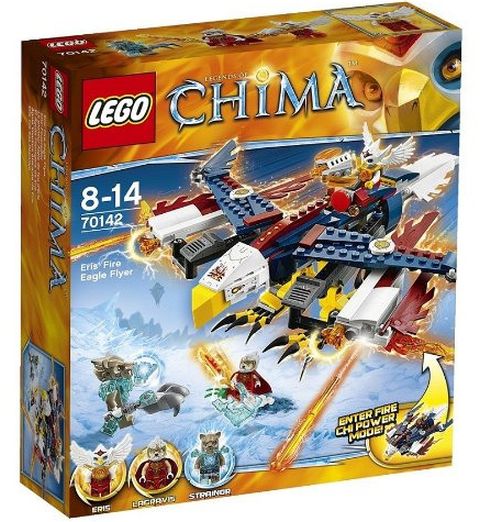 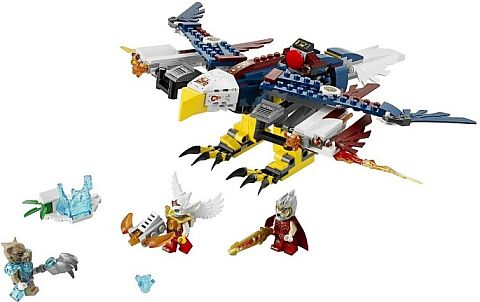 ➡ #70143 LEGO Legends of Chima Sir Fangar’s Sabre-Tooth Walker – Gorzan is trapped in the ice cage and must escape with the CHI before Sir Fangar can catch up with him. Help the Gorilla tribe leader slice through the ice with his red-hot Blayzhamma. Dodge the ice-tipped flick missiles shot from Sir Fangar’s chillingly awesome Saber-tooth Walker. Stay clear of its ice claws, snapping jaws and giant saber teeth, and move fast to evade Stealthor on the detachable trike! Includes 3 minifigures with assorted weapons: Sir Fangar, Stealthor and Gorzan. 415 pieces. Price: $39.99 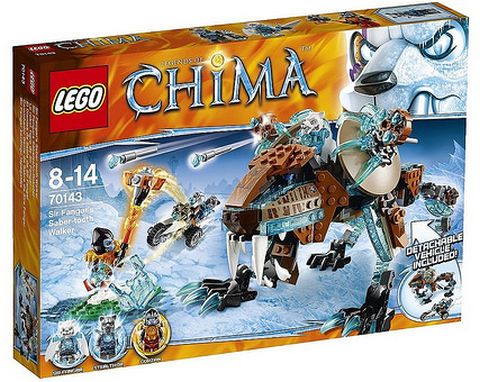 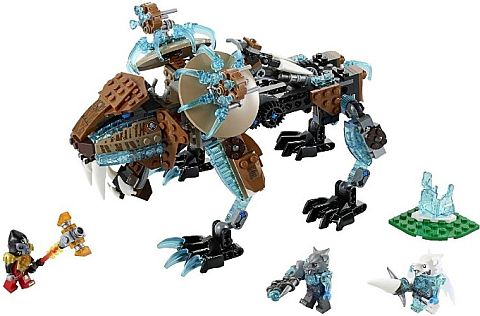 ➡ #70144 LEGO Legends of Chima Laval Fire Lion – Mungus needs to get the blue CHI to utilize all his powers and Cragger is racing to get to it first. Even up the odds with the mighty Fire Lion, placing Cragger alongside Laval in the cockpit. Enter fire CHI power mode to draw the Fire Lion up to full height. Prepare to attack with its fiery claws and huge snapping jaws. And when Mungus is in range, fire 4 missiles at once from the awesome weapon pod! Includes 3 minifigures with assorted weapons and accessories: Laval, Cragger and Mungus. 450 pieces. Price: $49.99 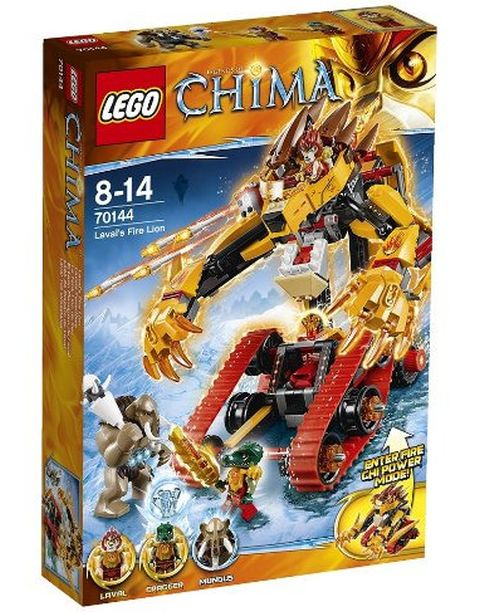 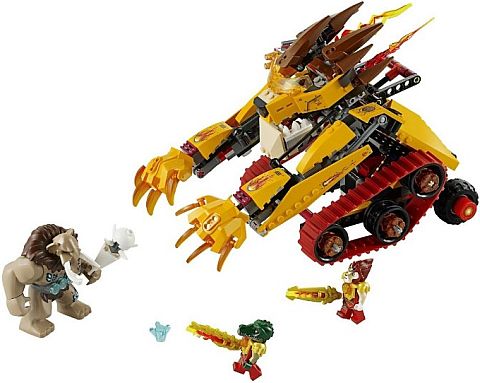 ➡ #70145 LEGO Legends of Chima Maula’s Ice Mammoth Stomper – The icy bad guys from the Mammoth and Saber-tooth tribes are getting away with the CHI in Maula’s Ice Mammoth Stomper. With a weapon in its trunk plus 2 ice blaster cannons and hidden flick missiles, this is one fearsome armored vehicle. Give chase with Worriz on his fire slider and Razar, avoiding the mighty Stomper’s powerful legs and giant feet. Move fast to grab back the CHI before Mottrot launches the Mammoth’s detachable flyer and they escape. Includes 6 minifigures with assorted weapons: Maula, Mottrot, Strainor, Vornon, Razar and Worriz. 604 pieces. Price: $89.99 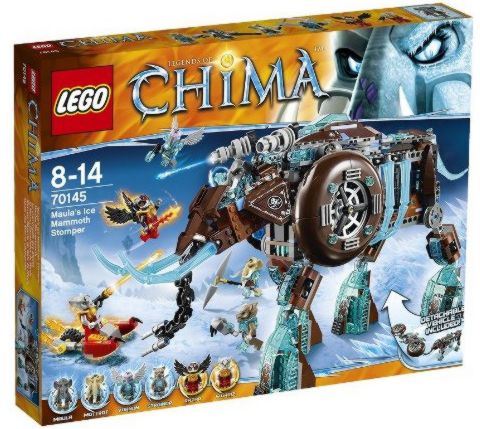 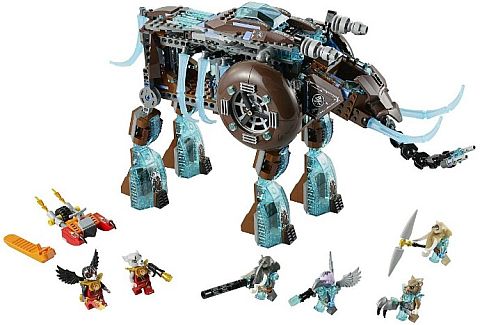 ➡ #70146 LEGO Legends of Chima Flying Phoenix Fire Temple – It’s the ultimate fire vs. ice showdown as the Saber-tooth warriors attack the all-powerful Phoenix tribe’s Fire Temple. Can they capture the great Phoenix leader Fluminox and his CHI and take control of the entire Kingdom of Chima? Behind the gates, there’s a pool of fire balls and an array of red-hot weaponry to put the heat on the invaders. Help Flinx defend the Temple from the gun turret and unleash the fire bombs. Act quickly before the Saber-tooth vehicle breaks down the Temple walls with its powerful clawing function. Or activate fire CHI power mode to convert part of the temple into a huge flying Phoenix, taking the thrilling action to the sky against the ejected Saber-tooth flyer! Includes 7 minifigures with weapons: Fluminox, Flinx, Foltrax, Tormak, Li’Ella, Stealthor and Voom Voom. 1301 pieces. Price: $119.99 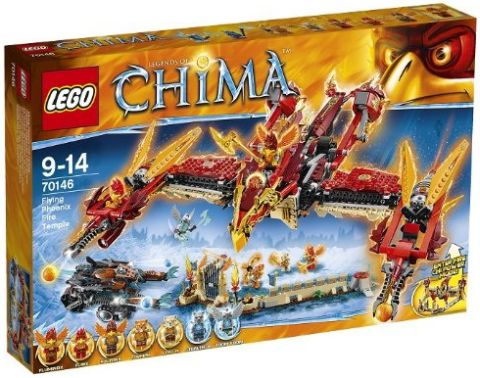 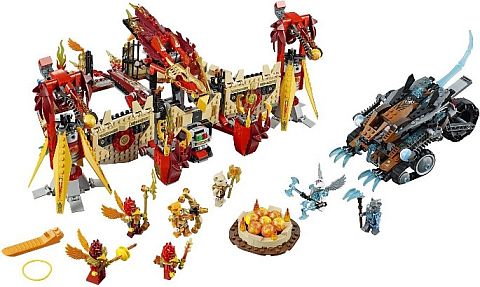 Looks like this is a very strong season for LEGO Chima sets with a great variety. The prehistoric animals are especially nice and that Phoenix is just gorgeous! Besides these set, there are also going to be seven large Constraction Figures, but I thought it is best to discuss those separately. Interestingly, there is no sign of Speedorz in this wave. As I have mentioned, these sets will be released this summer. While we are waiting, you can check out the currently available LEGO Chima sets at the Online LEGO Shop. 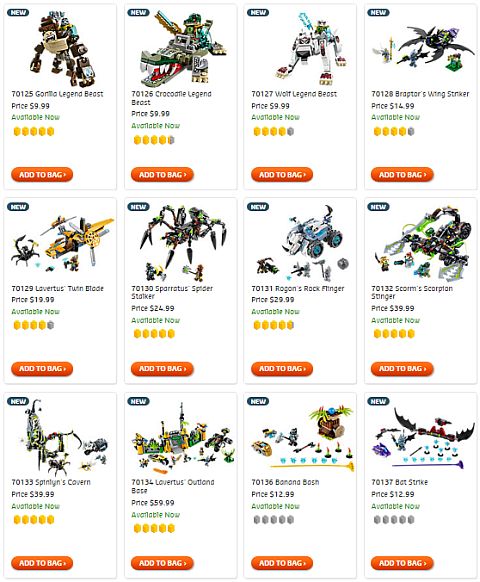 So what do you think? How do you like the LEGO Legends of Chima summer sets? Are you planning to get any of them? Which one is your favorite? Feel free to share and discuss in the comment section below! 😉