Despite being in the middle of the summer, the newly released LEGO City subtheme featuring LEGO Arctic sets is proving to be highly popular, and for good reason; the sets come with a great color-scheme, excellent vehicles, and newly designed minifigures and animals. Besides, the brand ambassador for the LEGO Arctic sets is the world famous polar explorer Ben Saunders (pictured below). Here we will look at all the LEGO Arctic sets in detail, along with full video-reviews on each of the sets. 🙂 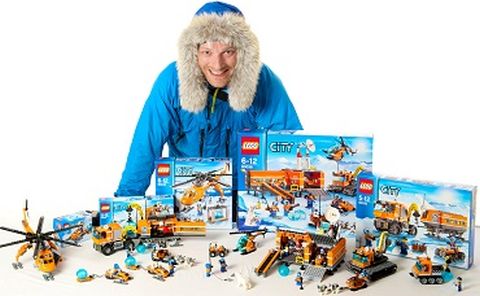 There are five sets in the new LEGO Arctic line, ranging from small sets to large play-sets with lot of features. You should be able to find these sets at most LEGO retailers, and they are also available at the Online LEGO Shop. In addition, there are also two limited edition sets. These have not yet been released and it is not clear at this point who the select retailer is going to be, but once they become available they should also be listed at the Online LEGO Shop. So let’s take a look at all of the LEGO Arctic sets. Below is a video-playlist of all of the sets reviewed by JANGBRiCKS (I have arranged them in order, starting with the smallest set and going up from there). And under the review-videos you will find the official description and pictures of all of the sets so you can take a good look at them. Enjoy!

➡ #60032 LEGO ARCTIC SNOWMOBILE – This is the smallest of the LEGO Arctic sets. Investigate the secrets of the ice with the LEGO City Arctic Snowmobile! Search for the secrets of the ice with the super-cool LEGO City Arctic Snowmobile! Venture out into freezing polar conditions with the explorer in his specialist Arctic gear. Crack open the huge ice block with the axe to reveal the mysterious crystal inside. Use the walkie-talkie to report your discovery, then load the ice and crystal onto the sled and return to base camp to conduct more tests. Includes an Arctic explorer minifigure with assorted accessories. 44 pieces. Price: $6.99 – BUY HERE 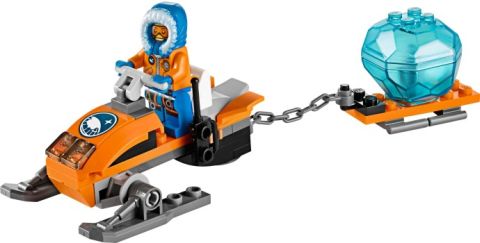 ➡ #60033 LEGO ARCTIC ICE CRAWLER – A slightly larger set with a nice little crane. Explore remote areas with the LEGO City Arctic Ice Crawler! Reach the remotest destinations with the LEGO City Arctic Ice Crawler! This super-robust utility vehicle has multiple lights and tracks to cope with icy terrain, plus a radar and antenna to maintain contact with the support team. Help the Arctic explorer to uncover the secrets of the ice with the pickaxe and circular saw. Lift exciting discoveries safely onto the truck using its powerful rotating crane and drive back to base camp. Includes an Arctic explorer minifigure with assorted accessories. 113 pieces. Price: $14.99 – BUY HERE 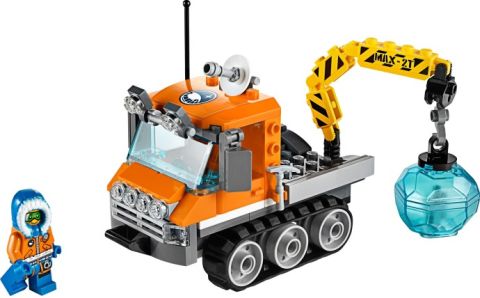 ➡ #60034 LEGO ARCTIC HELICRANE – A great looking helicopter and four of the new huskies! Fly to assist the explorer with his husky sled in the LEGO City Arctic Helicrane! Provide aerial back-up for an expedition of discovery with the cool LEGO City Arctic Helicrane! Head out into the wild with the Arctic explorer on a husky sled equipped with a camera, light and radar screen. Scan the huge ice block for hidden crystals frozen inside and then contact base camp with the walkie-talkie to call in the awesome Helicrane. Hover above the icy terrain and use the winch to lift up the container with the mysterious block of ice before flying back to base camp for more investigation. Includes Arctic explorer and pilot minifigures with assorted accessories. 262 pieces. Price: $39.99 – BUY HERE 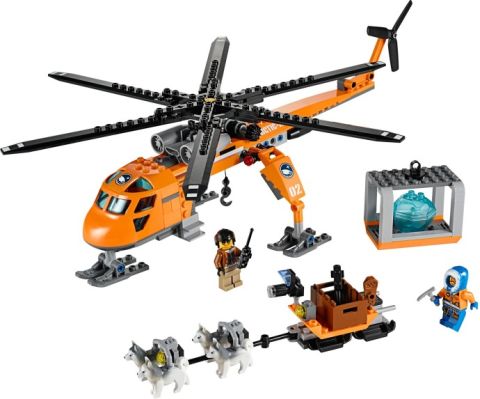 ➡ #60035 LEGO ARCTIC OUTPOST – This is one excellent mid-size set with a lot of play-features. Make sure you check out the details in the video-review posted above! Investigate remote polar areas with the awesome LEGO City Arctic Outpost! Drive out into remote areas with the mobile LEGO City Arctic Outpost and investigate the secrets of the ice in its high-tech laboratory! The truck’s powerful engine and massive tires means it can cope with the toughest conditions. Pull out the box of tools from the trunk and unclip the circular saw and wrench from the sides of the truck. Open up the detachable mobile lab to reveal an impressive array of equipment, including computer screens and microscope, to support the explorers in the search for the secrets hidden in the ice. Cut through the ice block with the chainsaw and attach the all-terrain vehicle’s chain to drag it back to the Outpost. Then activate the crane to lift the ice into the lab for analysis. Includes 3 Arctic explorer minifigures with accessories. 374 pieces. Price: $49.99 – BUY HERE 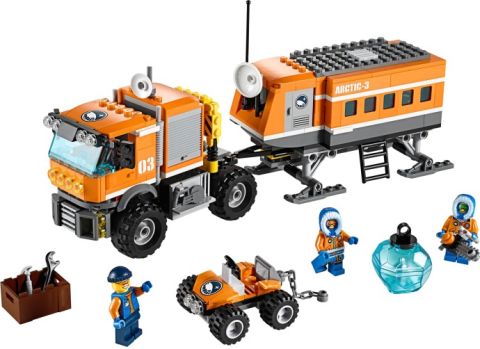 ➡ #60036 LEGO ARCTIC BASE CAMP – This is the largest of the LEGO Arctic sets, including a lot of vehicles and a fully equipped base camp. Make sure you check out the details in the video-review posted above! Plan and go on the ultimate expedition from LEGO City Arctic Base Camp! Head out into the wilds and set up the hi-tech LEGO City Arctic Base Camp to explore the secrets of the ice! Set out on major expeditions with the snow scooter and husky sled team. Investigate the secrets of the ice with the powerful tracked exploration vehicle. Call for helicopter back-up and deploy the winch and net to carry large blocks of ice back to base. Transfer the mysterious crystals into the laboratory on the conveyor belt and open the walls and roof of the lab for easy play. Help the scientist and research assistant analyze your findings with the 2 computers, microscope and other equipment. Then relax in a cozy corner of the garage and watch TV before lowering the door, driving out on the snow scooter and beginning another research mission. But beware – this is a dangerous place with extreme weather conditions and a polar bear lurking near the camp! Includes 7 minifigures with assorted accessories: 4 Arctic explorers, pilot, scientist and a research assistant. 735 pieces. Price: $89.99 – BUY HERE 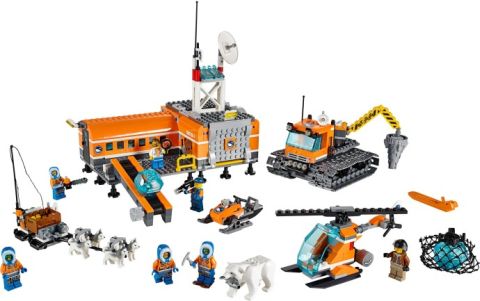 All of the LEGO Arctic sets mentioned above are available at the Online LEGO Shop. The following two sets however are not yet released, and they are going to be available as a limited release at select retailers.

➡ #60062 LEGO ARCTIC ICEBREAKER – Another large sets with a lot of play-features and a big work-boat! Power through icy waters with the LEGO City Arctic Icebreaker! Deliver crucial supplies to the exploration team with the awesome LEGO City Arctic Icebreaker! Power through the icy waters with this high-visibility orange ship. Lift off the bridge to access the bunk beds for the crew to rest on during the long journey. Drop anchor, take off in the helicopter and winch the cargo containers ashore, then drive the snow scooter to the explorer’s base. The base is equipped with a microscope, computer and many other useful research tools, plus a large antenna, gas cylinder and pylon to cope with the remote and extreme environment. Go out on expeditions with the explorers on the husky sled and the snow plough with big tracks and shovel to clear the way. But beware – a polar bear is roaming around, so watch out! Attach the snow plough’s chained hook to break apart the ice wall and access the crystals for analysis or to drag giant ice blocks back to base for further research. Includes 7 minifigures with accessories: 4 explorers, captain, pilot and a scientist. 717 pieces. Price: unknown at this point, but it should be around $100. 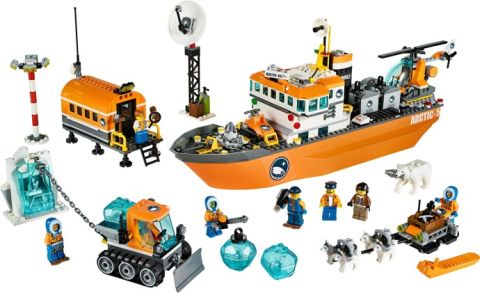 ➡ #60064 LEGO ARCTIC SUPPLY PLANE – Another aircraft for your Arctic explorers. Fly out supplies to the explorers with the LEGO City Arctic Supply Plane! Fly out important supplies to the explorers in the ice-cool LEGO City Arctic Supply Plane! This aircraft features an opening dual cockpit with computer dashboard, 2 huge spinning propellers, an opening rear cargo compartment and skis for a smooth landing. On the ground, load the pallet containing the gas cylinder, oil drum and boxes onto the trailer and clip onto the powerful utility vehicle. Equipped with many lights, cool rubber tracks, a huge snow-moving shovel plus two small trunks for tools, this vehicle can cope with the harshest Arctic conditions to transport the cargo to base camp. Includes 3 minifigures: 2 explorers and a pilot. 374 pieces Price: unknown at this point, but it should be around $50.

So what do you think? How do you like the LEGO City Arctic sets? Is this a theme you are interested in? Are you planning to pick up some of them? Or perhaps collect the whole range? Feel free to share your thoughts and discuss in the comment section below! 😉 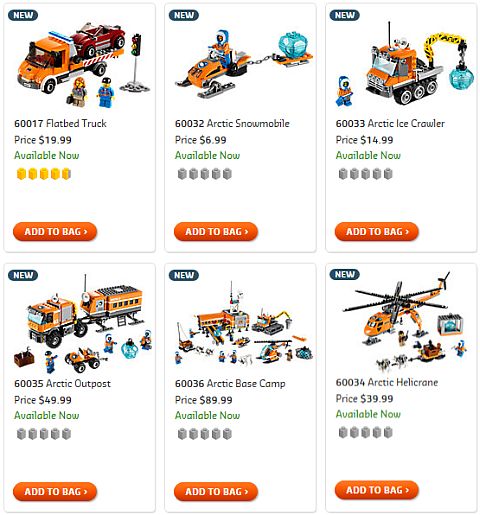