LEGO Exo Suit set – all about the Turtle

As you probably know already, the #21109 LEGO Exo Suit set that will be available shortly comes with a small robot referred to as the “turtle”. I have gotten a number of questions from readers in regards to this chunky little droid, so let’s talk about it. 🙂 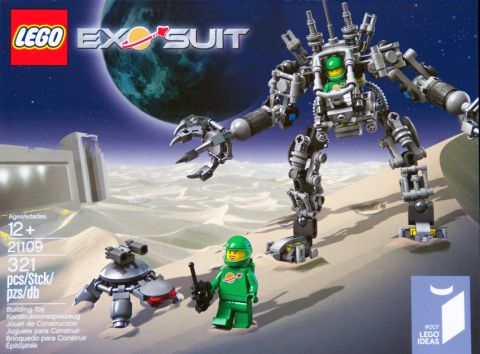 The turtle is the original design of LEGO fan Peter Reid, and is just about as popular as the Exo Suit itself. In his book LEGO Space: Building the Future (get this book if you don’t have it already, you won’t regret it – available on Amazon at the link), the following information is given about the turtles (from page 58 and page 104): “Technological advances from the Tranquility Base laboratories led to the creation of a new generation of robots. Mass-produced by Anodyne Systems, mechanoids played a vital role in the Federation. Countless designs, upgrades, and variant machines worked tirelessly for the benefit of mankind… The M364 Turtle plays an important role in the Federation Helium-3 mining program. Specially adapted by Anodyne Systems, the lunar Turtle variant scans the surface for mineral deposits, alerting other robots to any rich deposits. Turtles are also used to transfer equipment across the Moon’s surface.” The book also includes step-by-step instructions on building your own turtle.

Also, there is a narrative about the turtle in the instruction booklet of the #21109 LEGO Exo Suit set, where a unit is used by the astronauts Peter and Yve (the minifigs in the green suits) as they explore a crashed and long lost container-ship on a forgotten planet. In this case the turtle is modified to be a surveillance and survival drone that leads the two astronauts to an amazing discovery of a whole shipment of Exo Suits that was thought to be lost decades ago. The turtle also alerts them that they are not alone…

As you can see, the turtles are very versatile robots that can easily be modified and outfitted depending on the need of space-explorers. Peter went into great lengths on developing the turtle model, and even built a turtle factory as you can see in the video above. Also, Chris Salt from Oblong Pictures put together the following video that is made to appear as an online product catalog from the future by Anodyne Systems. (If you look at the video carefully you will be able to build all the different versions yourself.)

➡ M364 Turtle with Pulse Laser: A compact and efficient weapon option, the Pulse Laser has minimal power requirements, as well as a proven track record for reliability and effectiveness in the field. The weapon draws power from the turtle’s batteries. It is the lowers price point upgrade available from the Anodyne Systems catalog, and is popular in the civilian and commercial security sector.

➡ M364 Turtle with EMP Generator: The EMP Generator is the largest upgrade available, and carrier units must be fitted with stabilizing feet. The device produces a powerful electromagnetic field, capable of disabling unshielded electrical equipment within a two kilometer radius. In optimum conditions, the EMP Generator can discharge a pulse knocking out microcircuitry within four and a half kilometers.

➡ M364 Turtle with Fusion Cannon: A pair of miniature reactors power the Fusion Cannon. When fully charged, the weapon is capable of sustained fire, or a single supercharged beam which fully drains the weapon of power. The Fusion Cannon is particularly effective at close range. Operators should take care to follow the approved fuel rod replacement protocol.

➡ M364 Turtle with Tactical Beam Laser: A long range, highly effective assault weapon, the Tactical Beam Laser has proven accuracy over great distances. The intensity of the beam can be adjusted for a wide burst or precision target radius. The hear produced by the weapon means it can only be fired at full power for a short duration.

➡ M364 Turtle with Heavy Quad Cannon: Highly suited for medium to long range defensive duties, the Heavy Quad Cannon delivers its payload with 94% accuracy, thanks to its advanced targeting computer. The weapon can be loaded with a variety of ammunition types, and reprogrammed for numerous defensive roles, including civil defense and commercial security.

➡ M364 Turtle with Railgun: Upgraded M364 Turtles can be deployed for planetary defense with the railgun attachment. An electromagnetic rail system propels projectiles at speeds of up to 3500 m/s, resulting in an effective kinetic energy of 32 MJ over the first 100 km. The M364 warranty is void if the turtle is not fitted with the stabilizing feet upgrade. Consult Anodyne Systems Customer Service for more details. 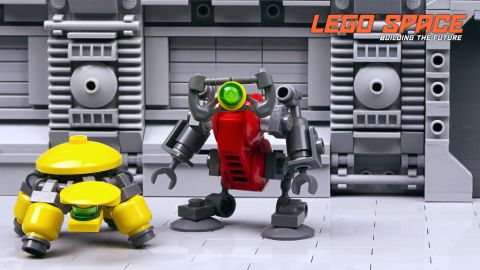 As you can see, turtles are really-really fun. You can make different color version and install all kinds of equipment on their backs. You can make them into surveillance units, defense units, use them for transport, or whatever else you like. I’m really happy that a turtle was included with the #21109 LEGO Exo Suit set; the Exo Suit itself is of course amazing (link to my full review at the end of this article), but the little turtle really adds to the playability and the possibilities of expanding the set into a full story. And in the LEGO Space: Building the Future book you can find even more robots that you can add to your LEO space-station.

If you’re having fun building turtles, you can enter the contest over at Eurobricks titled Turtle Insanity! Turtle Building Contest. The contest runs until August 10th. All you have to do is build your own version of a LEGO turtle that could be either generic, or based on any non-licensed LEGO theme. As far as prizes, you can win a signed copy of the LEGO Exo Suit set, an Exo Suit T-shirt or maybe your turtle will be on an exclusive turtle poster. More information can be found at Eurobricks: LEGO Turtle Building Contest