by Thita (admin) on November 3, 2014
in Building Techniques

As you probably know, LEGO has launched a new LEGO Ultra Agents theme early this year, similar to the old LEGO Agents and LEGO Agents 2.0, but with a new set of heroes and villains, and an even better color scheme (black/trans-light-blue, instead of dark-blue/silver). I picked up one of these sets and wanted to share with you my review, thoughts and tweak on it. 🙂 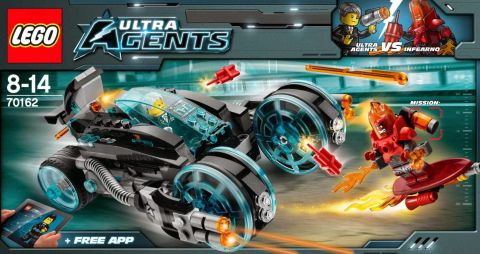 The #70162 LEGO Ultra Agents Infearno Interception is a $30 set of the 2014 line (see all LEGO Ultra Agents sets here), and it includes Solomon Blaze’s Interceptor/Hovercraft, and Infearno escaping with a fiery and flying concoction. For this article, we’re going to focus on the Agent’s vehicle, discussing how practical its functions are, how good the shaping is, and what can be done to improve it. 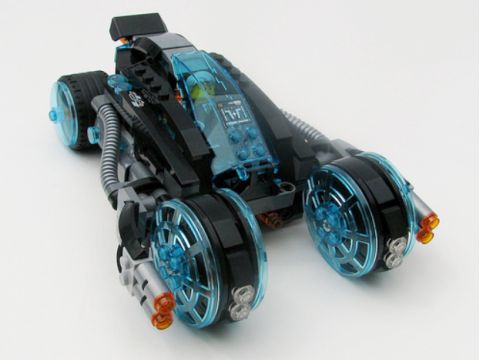 From the viewpoint you can see in the picture above the Interceptor looks almost perfect; just the right combination of busyness and smooth stealth. But a side view reveals that the previous angle is obviously one of the better ones and there is room for improvement. 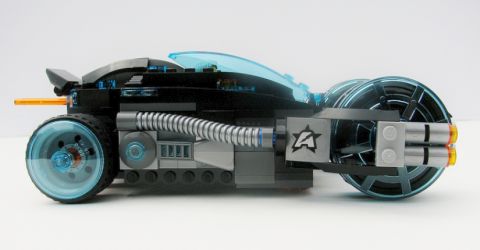 Another flaw lies in the Interceptor’s hovercraft function; for one thing, the front wheels don’t turn nearly as much as they should. The back view especially highlights the remarkably small turn capacity, due to the pieces used. This gives for a rather unrealistic look when the vehicle is in hovercraft mode – the amount of force brought to bear on the ground, thus giving it lift, is too small and directed at quite an angle. The back wheels are probably supposed to help give the vehicle lift, but what is going to power the whole thing through the air? Plus the wheels are at a pretty extreme angle. In my opinion the back wheels ought to rotate toward the back of the vehicle, giving it a bit of propulsion power, and leaving the front wheels to provide lift (which, with a bit more of a turn, they should be able to do). Of course we’re talking hypothetically here; since nothing like this actually exists, fault can’t exactly be found with the current model on the basis of realistic-ness, but the more possible it looks, the better! Below is a look at the original Interceptor’s hovercraft mode. 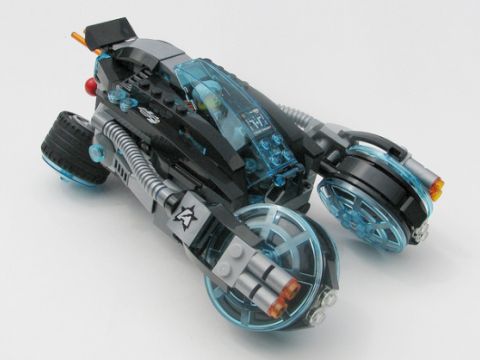 Lastly, I found the ejector seat a bit of a plain. Of course, it is rather small and obviously cannot have a huge amount of detail, but a little more detailing would have gone a long way! 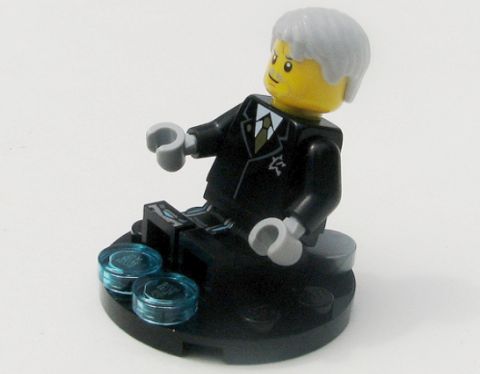 As you can probably tell, I found quite a few faults with the original design. In fact, I was left rather disappointed after building it – the whole thing looked plain compared to what I had expected, and had several problems when it came to the hovercraft function. The ejector seat was a bit of a pleasant surprise as I hadn’t realized the set included that function when I bought it. However, even that wasn’t much to write home about! Nevertheless, after examining it from all different angles, checking out the functions, and getting a few ideas as to how I could improve it, the vehicle started to grow on me. So I decided to change it up a bit, and see how I could improve the areas I found problematic. Most of them were fairly easy to correct, but fixing the hovercraft function to my satisfaction, especially given the fact that I was working with a very limited amount of bricks (not my whole collection by a long shot), was a bit more of a challenge! In the end though, I was able to hit on a very satisfying design. 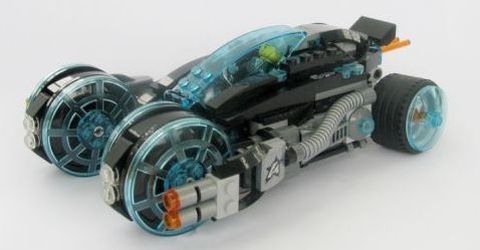 At first glance, it seems not much has changed. However, I was able to correct the nagging exposed studs on the side of the vehicle, and also the height disparity between curves around the cockpit, which had been bugging me a bit. From this perspective, those are the most obvious differences. But another less obvious change is with the hovercraft function; now the front wheels have a much greater turning capacity (more noticeable in real life than in the pictures), and the back wheels turn out rather than down, giving the hovercraft a bit of propulsion power. 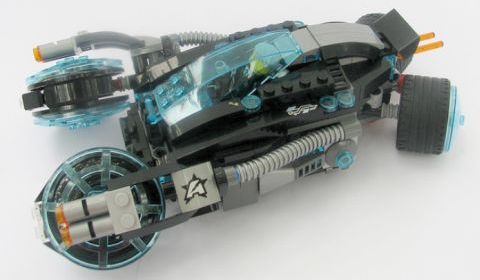 The change of the front wheels was accomplished fairly easily by using an L-shaped 1×1 brick, thus giving the axles more room to rotate. This naturally necessitated a few other changes here and there, but these weren’t too hard to accomplish. 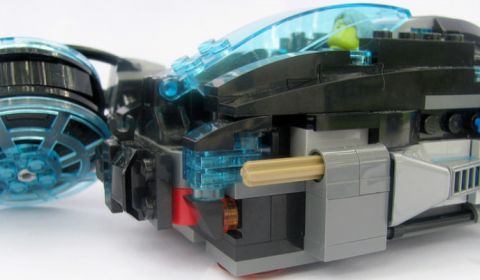 The change in the back wheel direction, on the other hand, is a bit more complicated, especially because the pieces I was working with were quite limited, particularly when it came to LEGO Technic pieces. I was constantly thinking of other, easier ways to accomplish the rotation with pieces I knew were fairly common, but instead I was forced to settle for this version, which is admittedly less than ideal. The pieces attaching the wheel aren’t quite long enough, meaning that the trans-light-blue dish pieces don’t attach as well as they should. 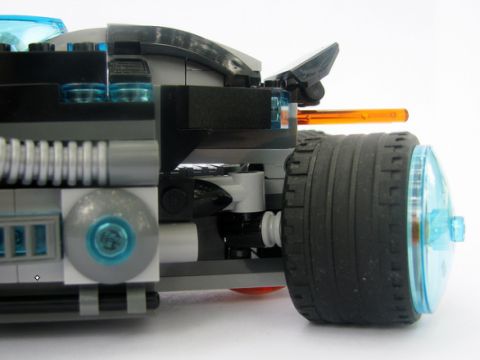 I found the section between the front wheels quite empty when the vehicle was looked at head on. The obvious reason for this is to allow room for the wheels to rotate, so there wasn’t a whole lot that could be done, but I felt some sort of bumper was most definitely in order! So I played around with it a little, and hit upon this solution: 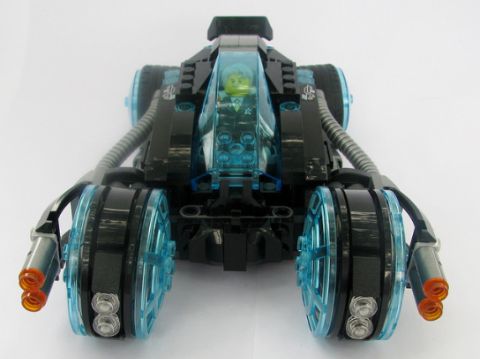 The last major change was to the cockpit and the ejector seat. I’ve already mentioned that the original seat was rather bland – little more than a flying disc, in fact. So I added a few levers and a bright orange piece on the bottom. Given the addition of the bottom piece, I figured I’d have to raise the seat a touch. This also helped it to eject a bit more easily – before the change, it was rather difficult to get the seat to un-stick! I also removed a few bricks that were doing nothing but take up space! So now, with the ejector seat inside, the cockpit looks like so: 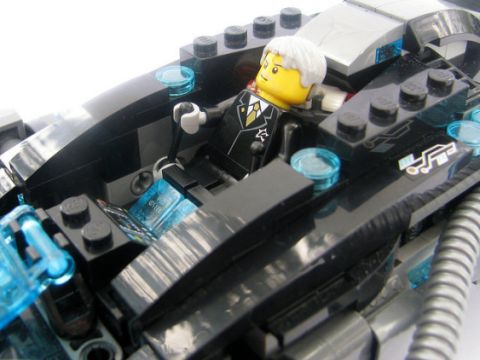 The final modified interceptor can be seen below, with Solomon Blaze alongside in his ejector seat. 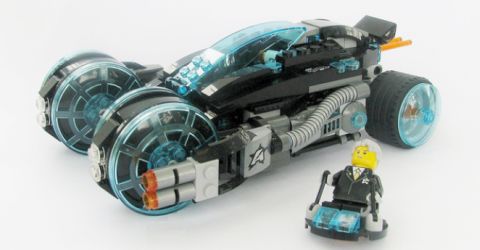 As you can tell, I’ve kept the basic structure and a lot of the final details, but changed a good deal of the functional sections. The end result is much more functional, conserves most of the stability (trust me on that one, I’ve hauled it around the country wrapped in a plastic bag in my suitcase, and have generally found that only one or two pieces have come off!), and at the same time sharpens the interceptor’s stealthy outline. Ultimately, I was quite happy with the set; not only did I enjoy the initial building time, but I got the added benefit of having fun changing it around! If you are interested in any of the LEGO Ultra Agents sets, they should be avilable at most LEGO retailers and of course you can also find them at the Online LEGO Shop.

So what do you think? Do you have the LEGO Ultra Agents Infearno Interception set? Did any of the same details bother you? Have you made some of your own modifications on it? Are there other sets – LEGO Ultra Agents or otherwise – that you modified? Feel free to share your own thoughts and tweaks in the comment section below! 😉