LEGO recently released a second wave of LEGO BIONICLE sets, so we will look at those today. While last time we mostly got heroes, this time we get the villains called Skull Warriors. As the name suggest, these badguys are basically undead skeletons with a tall and bony appearance. There are five sets in this second wave, and just like we have seen in the first wave, you can combine the sets to create even larger villains by using the instructions on the LEGO BIONICLE website. Also, there is a Hero Mask in every set. So let’s take a closer look at these badguys! 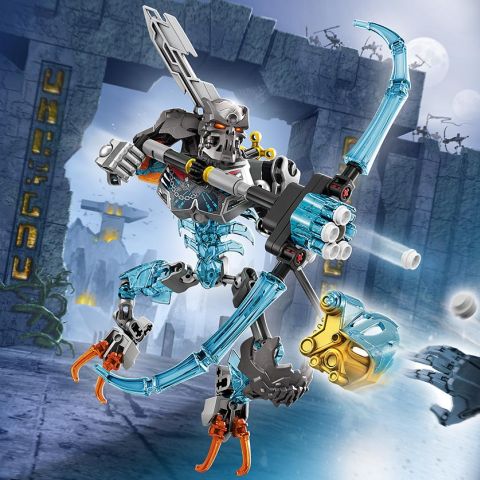 ➡ #70791 LEGO BIONICLE SKULL WARRIOR: The first think you will notice about the Skull Warriors is the new skeleton ribcage element that is used on all of them in various transparent colors. There are also new parts for the arms and legs that makes them look more bony. The included Hero Mask is a beautiful two color transparent-blue and gold. You can watch the video-review below for more details, and here is the official description: Unleash the Skull Warrior’s huge Freeze Bow rapid shooter! Put the freeze on intruders to the ancient city with the ferocious Skull Warrior! Repel approaching LEGO BIONICLE heroes by unleashing six successive shots from the huge Freeze Bow rapid shooter. Activate the battle bash function and overcome any opponent in close combat. Rip off their masks with the hook blade and channel their elemental power to awaken more of the Skull Warrior’s undead comrades! 102 pieces. Price: $14.99 – BUY HERE 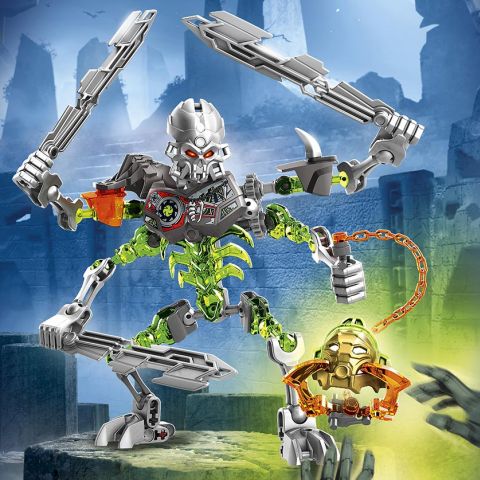 ➡ #70792 LEGO BIONICLE SKULL SLICER: This is another skinny fellow, made to look even more bony with those extra arms and long blades! The color scheme here uses transparent blue, which is also reflected on the included Hero Mask. You can watch the video-review below for more details, and here is the official description: Get 4-armed and dangerous with the Skull Slicer! Patrol the ruins of the ancient arena with the menacing Skull Slicer! This ancient champion has been animated by the dark magic of the Skull Spider Mask, fusing him with his razor-sharp hook blades. Create fearsome combat poses and turn the wheel on Skull Slicer’s back to activate the 4 battle arms all at once. Use the hook blades to rip off masks and pick them up with the mask grabber. Any LEGO BIONICLE hero wanting to pass through the arena will have to get past this wicked warrior first! 71 pieces. Price: $14.99 – BUY HERE 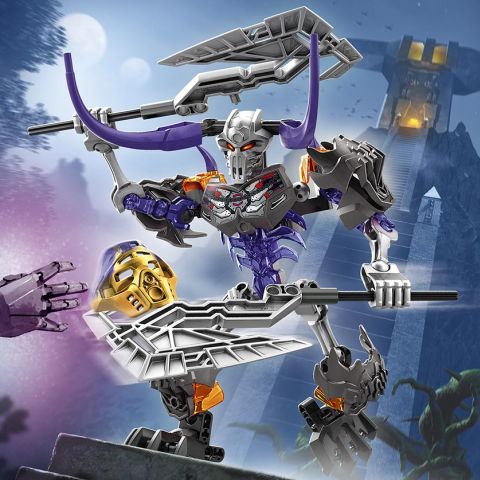 ➡ #70793 LEGO BIONICLE SKULL BASHER: Giant purple horns, a translucent-purple ribcage, and huge battle-axes. The Hero Mask is also transparent-purple, with gold. You can watch the video-review below for more details, and here is the official description: Press the trigger for bashing battle action with Skull Basher! Stand guard at the gate to the Temple of Creation with the mighty Skull Basher! This fearsome warrior, created by Skull Grinder, is armed with 2 giant hook axes and is ready to use them to intercept anyone who tries to get in. Press the trigger on its back to activate the battle bash function and chop off invaders’ masks. LEGO BIONICLE heroes must not underestimate this brute’s awesome power! 72 pieces. Price: $14.99 – BUY HERE 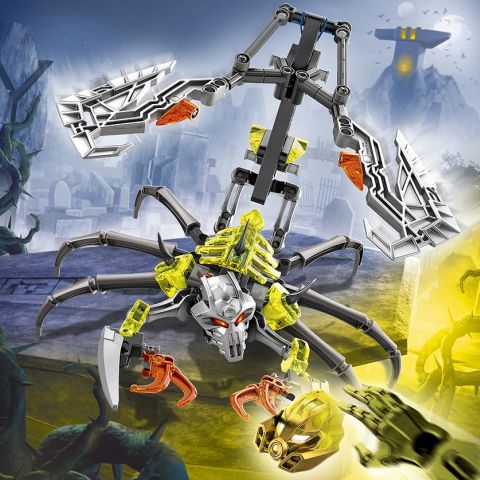 ➡ #70794 LEGO BIONICLE SKULL SCORPIO: If you watch the video-review below you will see that JANG is not particularly fond of this character, and I agree with him. It looks quite awkward, wanting to be skeleton-y and scorpion-y at the same time. Here is the official description: Seek the lost masks of power with Skull Scorpio! Enter the dark burial ground of the ancient city to search for lost masks of power with Skull Scorpio! This evil creation of Skull Grinder is a fierce enemy for anyone who gets in its way. If you encounter LEGO BIONICLE heroes underground, press the trigger on the tail to unleash the stinger with hook blades. Then pick up their elemental masks in the gripping pincers to give Skull Scorpio even more poisonous power! 107 pieces. Price: $14.99 – BUY HERE 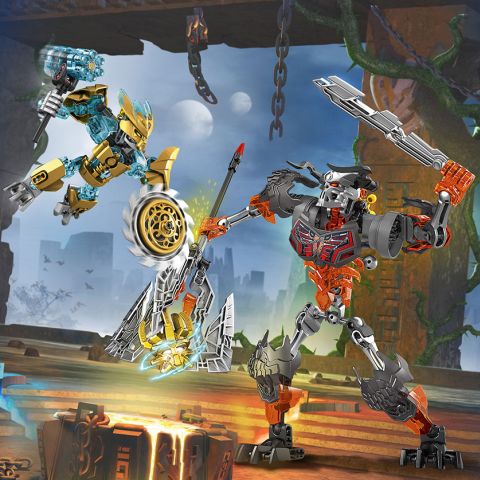 ➡ #70795 LEGO BIONICLE MASK MAKER VS. SKULL GRINDER: This is my personal favorite in this second wave of LEGO BIONICLE sets. Skull Grinder looks deliciously evil with translucent-orange highlights, and this is the only set in this wave with a good guy, the Mask Maker himself. Also, you get the Mask of Creation, which is the most beautiful LEGO BIONICLE mask. You can watch the video-review below for more details, and here is the official description: Battle against evil for the mythical Mask of Creation! Begin the ultimate battle between good and evil with LEGO BIONICLE Mask Maker vs. Skull Grinder! Join forces with Ekimu, the wise Mask Maker, to prevent Skull Grinder from taking the powerful Mask of Creation. Activate the battle arm functions and let combat commence! Evade the Mask Stealer Staff as the evil Lord of the Skulls tries to knock off Mask Maker’s special Protector Mask. Defend with the rotating saw shield and attack with the Hammer of Power’s rapid shooter. You must use all of the Mask Maker’s magical skills to triumph over this evil foe! 171 pieces. Price: $29.99 – BUY HERE

So far what I have heard is that LEGO BIONICLE fans are happy with this second wave. Aesthetically speaking I much prefer the characters in the first wave, especially the Protectors – I’m just not a fan of tall, skinny skeletons, and prefer chunkier designs both for heroes and villains. However there are many really nice parts and unique elements in these sets that even I can appreciate. Also, the mobility of the characters is great; you don’t have to worry about them falling apart during play. So all in all, if you do like the look, I think you will be pleased. You should be able to find all the new sets at your local LEGO retailer, and they are also available under the LEGO BIONICLE section of the Online LEGO Shop. 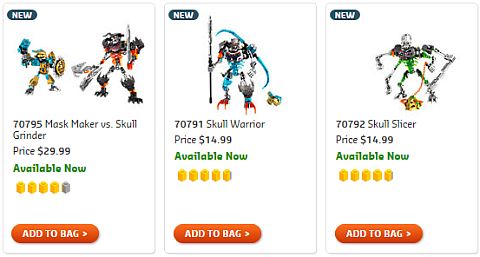 Previous post: How to build a LEGO elephant & more!