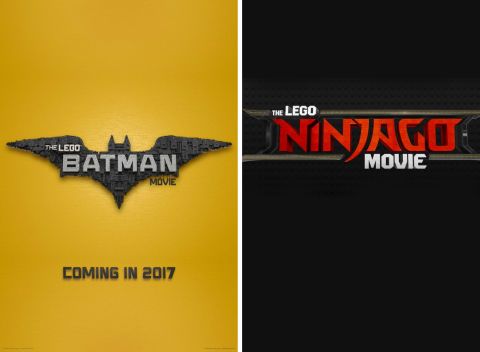 Warner Bros. confirmed a few days ago that The LEGO Batman Movie is scheduled for February 10th, 2017, and also released a few images from the film, as well as the first teaser-trailer. Director Chris McKay, the animation director for The LEGO Movie, says it was clear immediately how popular Batman (voiced by Will Arnett) was in his past supporting role, especially with fan-repeated lines like “I always work in black, and sometimes very, very dark grey.” “We thought if we can tell a well-rounded, funny story that’s action-packed, we can build a big movie around this character,” says McKay. Based on the trailer it looks like the new film is going to be just as entertaining as The LEGO Movie. And Batman continues to be awesome, now with a new utility belt – I hope this becomes an official LEGO piece! And I would definitely want a LEGO Batman in a silk kimono! See trailer below.

There is no trailer for The LEGO Ninjago Movie, scheduled for September 22nd, 2017, but there is an official teaser-poster and synopsis from MovieInsider.com: “Ninjago is the story of six young ninja tasked with defending their island home, called Ninjago. By night, they’re gifted warriors, using their skill and awesome fleet of vehicles to fight villains and monsters. By day, they’re ordinary teens, struggling against their greatest enemy: high school.”

As far as The LEGO Movie Sequel all we know at this point is that it is scheduled for May 18th, 2018, and it will take place four years after the events in the original movie.

So what do you think? How do you like The LEGO Batman Movie trailer? Are you looking forward to the film? And what do you think of the story of The LEGO Ninjago Movie? Feel free to share your thoughts and discuss in the comment section below! 😉

Next post: Starting out to sell LEGO on BrickLink