LEGO’s social sharing platform for teen and adult LEGO fans was launched back in late 2011 under the name ReBrick.com. It was originally a bookmarking site like Pinterest, where you don’t upload content directly, but pin it from other sites. While the idea was good, the site never really caught on. This largely had to do with teen and adult LEGO fans already sharing and interacting at other places, and due to the poor usability of the site.

However one feature of ReBrick that caught the attention of older LEGO fans is their contests. LEGO usually runs contests through their main website, their social media sites, and through the LEGO Club. Although technically there is no age-limit on most of these contests, LEGO’s focus is obviously on inspiring and rewarding children, so the winners are always either kids or younger teens. This is of course totally fine – after all LEGO is a toy company and their main audience is children – but sometimes older fans look at these cool contests with longing – they want to have fun too!

ReBrick on the other hand is for teen and adult LEGO fans only, and you have to be at least 13 to register. And of course their contests are also for teens and adults – no little kids allowed to snatch up the prizes before your older eyes! ReBrick themselves recognized that their most popular feature is the contests, so they decided to re-launch the website focusing only building challenges and contests.

Senior Director of LEGO Community Engagement Tormod Askildsen explains: “The new LEGO ReBrick platform gives people with a love for the LEGO brick an outlet to express their creativity by sharing their own original and artistic work through fun and engaging contests with targeted briefs made by The LEGO Group. On LEGO ReBrick the creative community will get an exceptional opportunity to work closely with the LEGO Group and to impact and influence not only the LEGO brand and marketing but also to inspire the adult, teen and child builders of tomorrow.”

There are  currently two contests on the new ReBrick website. The first one invites you to build you dream kingdom in the sky with LEGO Worlds, the new sandbox game developed by Traveller’s Tales and published by Warner Bros. This contest is open until April 4th. The winning entry will be rebuilt and displayed at E3 Expo in Los Angeles later this year, and will also be available in the game for all players to enjoy. The second is a LEGO stop-motion video contest based on LEGO Speed Champions with a deadline of May 2nd and the grand-prize of two VIP tickets – courtesy of Porsche – to Le Mans this summer, and the whole collection of LEGO Speed Champions sets. You can read more about the contests, the rules, and the prices, as well as see the current entries here: LEGO contests at ReBrick.com 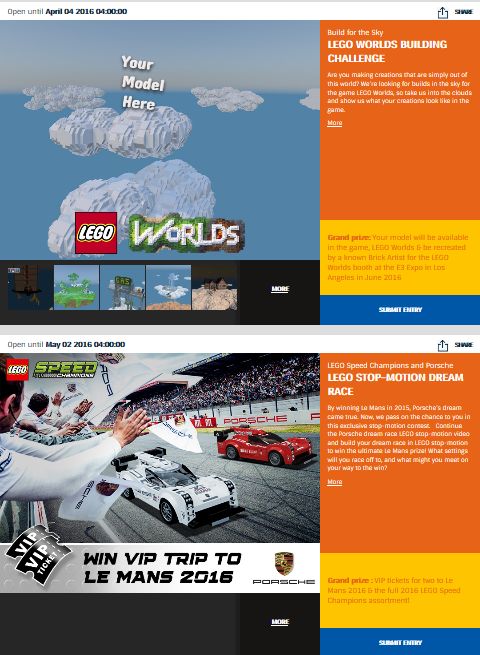 I’m looking forward to see how ReBrick develops and what other contests they will come up with. What do you think? Did you use the old ReBrick website? Have you ever entered any of their contests? Are you curious about the current contests, or will you wait for the next one? Feel free to share your thoughts in the comment section below! 😉