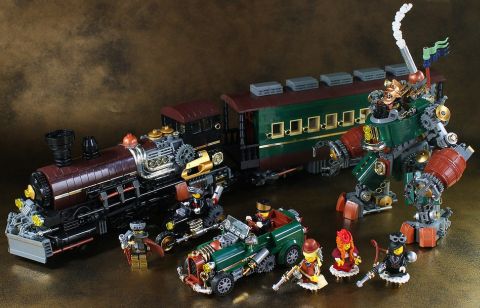 While many LEGO fans build models in steampunk style, or are inspired by elements of steampunk, LEGO fan Moko built a whole collection of steampunk models that I wanted to show you today. I consider these creations “pure” steampunk, because they are not just borrowing some features from the style, but are consistent in all aspects, down to the color choices and the minifigure outfits. The collection consists of a stunningly beautiful steampunk train, an equally great looking mech, a gorgeous classic car, and a sweet motorcycle.

At first look this LEGO steampunk train looks somewhat similar to the #10194 LEGO Emerald Night because of the colors, it is far more detailed. Check out the piping, gears and other details around the boiler! There are also pictures of the engine cab, and the interior of the train car that you can find at Moko‘s flickr gallery. 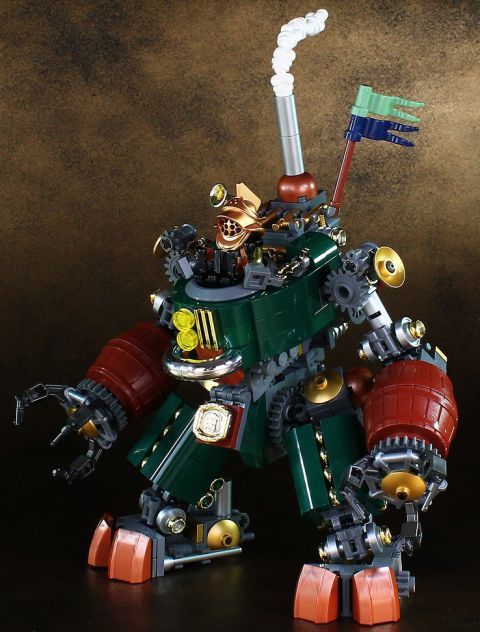 The LEGO steampunk mech is another great model, with carefully chosen pieces in just the right colors and lots of greebling. And of course the mech is steam operated. I’m only showing you it here from the front, but the back is equally detailed (see Moko‘s flickr gallery for more pictures). Also notice the awesome mech operator wearing a gladiator helmet! 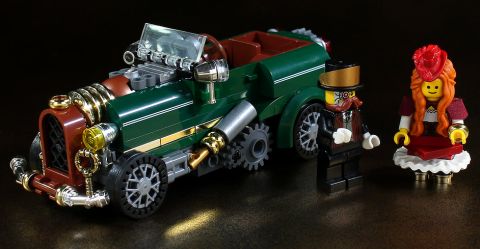 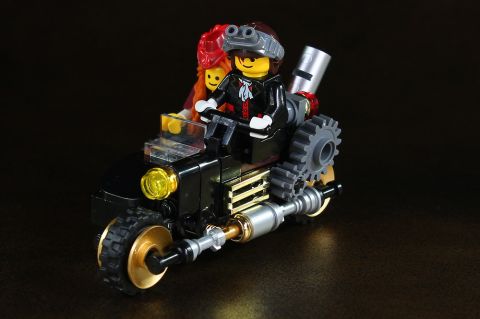 The LEGO steampunk motorcycle is the smallest model in the collection, but it still comes with great details. It has a sidecar, gears, piping, and lots of gold accents to create that steampunk-ish look.

And here is a picture of all the characters who operate these awesome machines. They all seem to have at least some artificial body parts, enhanced with steampunk technology. And they all sport neo-Victorian outfits, and some very dangerous looking weaponry.

If you have never built any steampunk creations, but would like to, see this Wikipedia page about the style to get you started. For the main colors you would want to choose browns, grays and gold or copper, and for accent colors dark-blue, dark-green, dark-red, and dark-orange work well. Remember that all steampunk vehicles are supposed to be powered by steam, so check out pictures of steam-powered machinery. They always have interesting gears, gauges, and piping. For minifigs use top hats, mechanically enhanced body parts, goggles, and timepieces. You can find plenty of pictures of steampunk-inspired fashion online, and there are good choices for minifig parts in official LEGO sets to make them. If you don’t have enough LEGO elements to fit the style, you can get an official LEGO set that already has a lot of steampunk-ish details and colors, then start modifying and building from there. The current LEGO Ninjago sets are a good option. You can find them under the LEGO Ninjago section of the Online LEGO Shop. 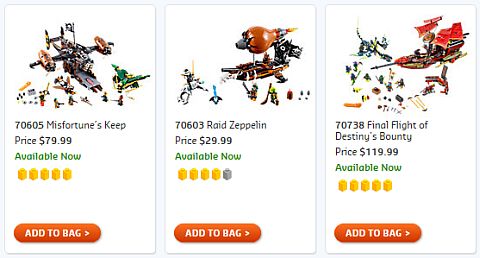 Next post: Back to school with LEGO desk supplies!