Using LEGO as a medium of art is not a new phenomenon, and we have talked about a number of talented LEGO artists in the past (see links at the end of this post). However, while most artists use LEGO’s shapes, colors, or versatility as a building and sculpting material, artist John V. Muntean takes LEGO art to a whole new level by using LEGO to make shadow-art. 🙂 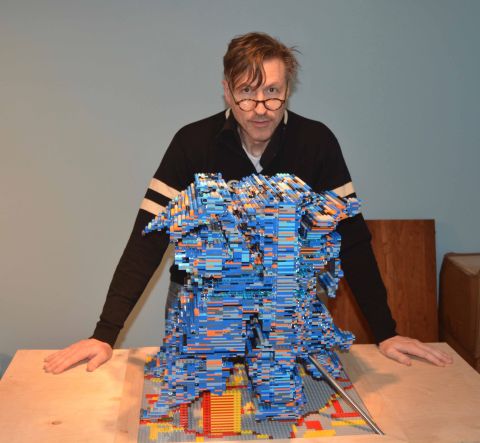 In the video-player below you can watch as some very strange looking LEGO sculptures magically project beautiful images on a screen by the addition of light and movement. In the first video you can see a dragon transforming into a butterfly, then a jet. In the second video, a knight becomes a mermaid and a pirate ship. In the third video you can watch people’s reaction to one of the sculptures in Singapore where it was displayed.

Amazing, isn’t it? John is actually not new to this type of artwork. He has been studying the shapes of objects and the shadows they cast, and uses different materials for what he calls Magic Angle Sculptures. He shares on his website: “As a scientist and artist, I am interested in the how perception influences our theory of the universe. A Magic Angle Sculpture appears to be nothing more than an abstract wooden carving, skewered with a rod and mounted on a base. However, when lit from above and rotated at the magic angle (54.74º) it will cast three alternating shadows. Every 120º of rotation, the amorphous shadows evolve into independent forms. Our scientific interpretation of nature often depends upon our point of view. Perspective matters.” 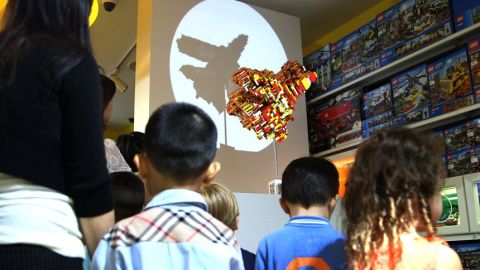 John V. Muntean has a Ph.D. in Chemistry from the University of Chicago, a B.S. from Trinity College, Hartford CT, and is a high school dropout. His 1990 thesis, Quantitative Aspects of Solid-State Carbon-13 Nuclear Magnetic Resonance Spectroscopy, led to Magic Angle Sculptures. He has been a research scientist for the Department of Energy and private industry and Professor of Organic Chemistry. He is currently a spectroscopist at Argonne National Laboratory. He lives near Chicago.

John was inspired to create the Magic Angle Sculptures through his work with magic angle sample spinning, a scientific technique that mechanically simulates a molecule tumbling through space. The effect is to rapidly interchange the three axes of the Cartesian coordinates (x, y, and z). A complex observable phenomenon in three-dimensional space (such as the nuclear magnetic moments of a static molecule) can be represented by 3 x 3 tensors or sets of nine numbers; spinning at the magic angle simplifies that quantity to single isotropic values.

While the shadows are beautiful to look at, and you can just consider these as pieces of magical LEGO art, there is a lot of science and philosophy that’s behind these sculptures. If you are willing to go deeper, and experiment with some going-down-the-rabbit-hole type thinking, on his website the artist encourages the viewer of the sculptures to imagine a couple of scenarios and series of questions:

1. You are a two-dimensional being living in the plane below a sculpture. Would you be able to visualize the three-dimensional object by watching only the shadows change with time? From your current vantage, (in three dimensions) note that there is no slice through the object that contains the whole image that is projected below. So the shadow at any moment is both less and more complete than the whole object. The shadow’s form does not exist in the object but is rather implied from the complete integration through three-dimensions. No understanding of the object or shadow could be complete if you are limited to two-dimensions.

2. You are a three-dimensional being, locked into four-dimensional space-time. Are you observing a universe that is casting shadows from a higher dimension? If so, are you a projection that does not exist in any one “slice” through space-time? How does this affect your perception of locality? Are you like the prisoner in Plato’s Allegory of the Cave, watching shadows and convinced you are observing the universe as it is? Is it possible to break free and see the truth as the prisoner does? Would you recognize the true forms or would they appear as foreign as a Magic Angle Sculpture?

This type of out-of-the-box thinking and experimenting is what pushes our understanding of the universe and ourselves in it into greater heights and deeper levels. And it is what transforms a child’s toy like LEGO into a scientific instrument. While there people who are more right-brain artists, and those who are left-brain scientists, I found that the most amazing results always come from the combination of both. And that’s why I like John’s Magic Angle Sculpture.

What do you think? How do you like these LEGO Magic Angle Sculptures? Is there any other LEGO art that you really like because it goes deeper than just being a good-looking LEGO creation? Feel free to share and discuss in the comment section below! 😉