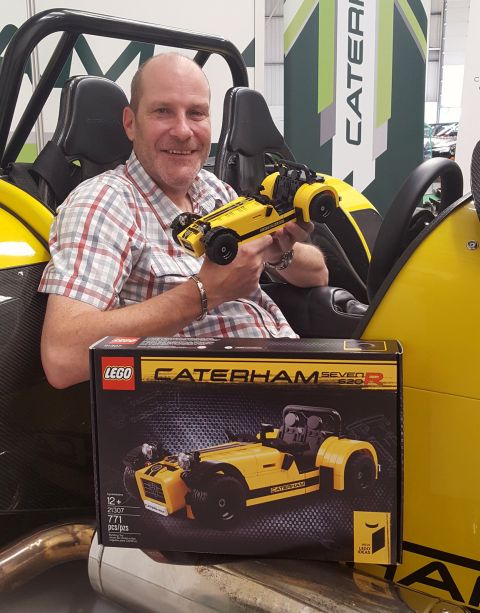 Announcement on LEGO Ideas: The wait is over! We’ve been polishing this yellow and black beauty all night so that we could finally present to you the first official images and details of the #21307 LEGO Ideas Caterham Seven 620R! Measuring in at 771 bricks distributed across 3” (10cm) in height, 11” (28cm) in length and 5” (14cm) in width, this Caterham contains stunning details to reproduce that awe-inspiring Caterham look. This LEGO Caterham is racing to a store near you with availability from the 1st of October, 2016 for a recommended retail price of USD 79.99 / EUR 79.99. 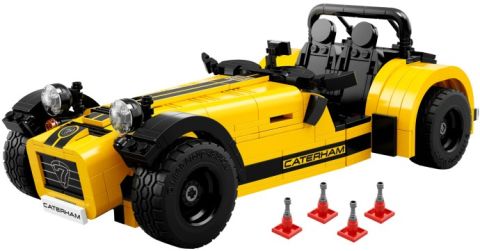 Official product description: Create a LEGO version of the Caterham Seven 620R, a custom-built sports car with an unashamed old-school vibe. Power steering? No chance. Electric windows? Forget it. The Caterham Seven is definitely not for the faint-hearted – luxury is for wimps! Remove the nose cone, engine cover, or engine, to take a closer look at the authentic details of a LEGO model that’s for true car connoisseurs only. 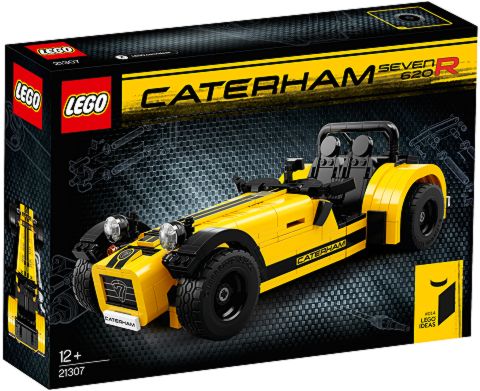 Insights from Carl Greatrix, fan designer, and Henrik Andersen, LEGO designer: “One of the most exhilarating drives I’ve ever had was out on the track in a Caterham Seven.It is brutally fast due to its light weight and tremendous fun to be in. It really struck a chord in my heart that I never forgot”, Carl Greatrix a.k.a. bricktrix_Carl explains as he talks about his love for Caterham cars. This love turned to inspiration for his future LEGO Caterham model, Carl explains; “When I got back into building LEGO car models, I thought the shape of the vehicle would lend itself to being modeled well in LEGO bricks as it is very angular, and if I could find a suitable scale then I would be able to get all the details into it that I would love to see.” Henrik Andersen, LEGO designer, shared his enthusiasm for Carl’s work; “Carl really did a great job of converting the real car’s shape into a LEGO version as both the sloping front and the hood are really complex.” 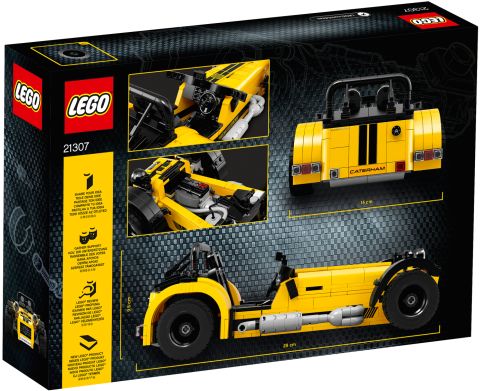 In the video review below from Bricks magazine, you can see the model in more detail. I’m very impressed that all the decorated elements are printed, including the hardly visible break disks on the wheels! That’s a lot of printing and attention to detail!

While the #21307 LEGO Ideas Caterham Seven 620R definitely looks impressive, and I think most people will be very happy with it, it’s worth noting that there are some differences from the original LEGO Ideas submission. Carl proposed a number of different color variations (see examples below), and some LEGO fans prefer these over the plainer looking yellow and black version. Of course the model can be rebuilt in other colors, however because the decorations are printed, they will either have to be left off, or some yellow will have to remain on alternate models. It seems like a yellow and dark-green version should still be possible though. 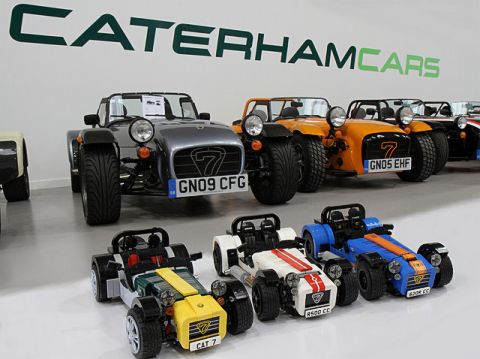 Also, the original submission had working steering, while the final model has no functional steering at all. Perhaps this was too hard to accomplish without compromising the look and stability of the vehicle at this scale. And I liked the spare tire that was included at the back of the original. Unfortunately on the final model the extra tire is missing. 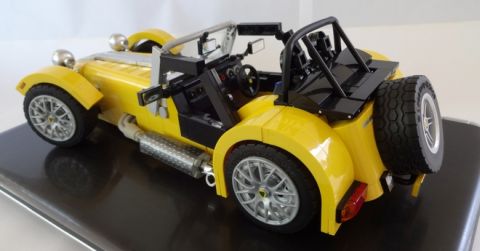 Still, I think the #21307 LEGO Ideas Caterham Seven 620R is a beautiful model for car enthusiasts, and a perfect addition to the other larger LEGO vehicles like the #10242 LEGO Creator MINI Cooper, the #10248 LEGO Creator Ferrari F40, and #10252 LEGO Creator Volkswagen Beetle. As mentioned at the beginning, the set will be available in October. In the meantime you can check out the other fan-submitted sets under the LEGO Ideas section of the Online LEGO Shop.

So what do you think? How do you like the #21307 LEGO Ideas Caterham Seven 620R? What do you think of the colors and other details? Are you planning to get it when it becomes available? Feel free to share your thoughts and discuss in the comment section below! 😉