The history and evolution of LEGO capes

Every super hero and super villain know that wearing a cape is an important part of dressing to impress. Capes make badguys look bigger and meaner, and good guys more elegant and supernatural. So it makes sense that important people in the LEGO minifig world are also draped in capes. LEGO capes have a long and interesting history with their own controversies. 🙂

The very first LEGO cape appeared in 1984 and was used all the way until 2003. It was a very small plastic cape that attached to the neck-post of minifigures, covered the back of their torsos, and slightly flared out at hip level. The cape is so small, that you won’t even notice it from the front. It was mostly worn by LEGO knights and kings, and came in four colors; black, red, brown and blue. The brown cape only appeared in one set, the #6040 LEGO Castle Lion Knights Blacksmith Shop in 1984, where it was used facing to the front as the apron of the blacksmith. White this is a very unassuming small cape, I always liked it. It gives knights a bit of extra flair, which was especially important when minifigures came with very simple printing. The small size of the cape also assures that it doesn’t get in the way when knights are riding horses, running, or performing other knightly activities. A good looking, practical, and minimalist cape for heroes on the job. 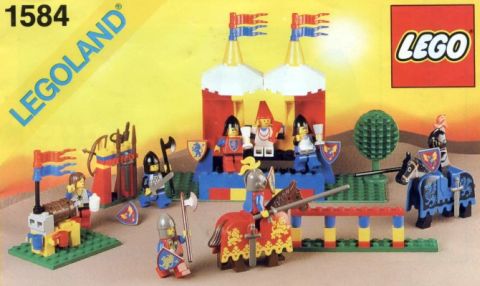 LEGO introduced the first cloth capes in the 1990s. These capes were made of a starched fabric, which gave the capes nice flow, but they also frayed easily. The very first cloth cape was teardrop shaped with rounded lobes at the bottom, and a single neck-hole for the LEGO Castle Dragon Knights. The cape was yellow with a printed red border and a green and red dragon pattern. It was introduced in 1993. A couple of years later (in 1995) the king of the LEGO Castle Royal Knights was given the same cape with a different printed pattern. This is a particularly unique cape because it only appeared in the #6090 LEGO Royal Knights Castle. The cape was red with a white border, and a yellow LEGO Classic Castle lion head in the center. White this cape is very hard to find, you can get the same or similarly designed capes from LEGO customizers (image from BrickLink).

By the late 1990s, LEGO figured out the cloth cape design that has been used ever since; triangle shape, and two neck-holes to give the cape some shape and keep it in place. Again, because these capes were made of a starched fabric, they flowed nice but frayed easily. The plain, unprinted version came in every imaginable color: white, black, yellow, tan, reds, purples, blues, greens, browns and grays. While most minifigs wear simple unprinted cloth capes, there are also some notable unique capes from the late 1990s with scalloped bottom edges and printed designs. King Achu’s beautifully printed cape from the LEGO Adventurers Jungle sets is an excellent example (image from BrickLink). 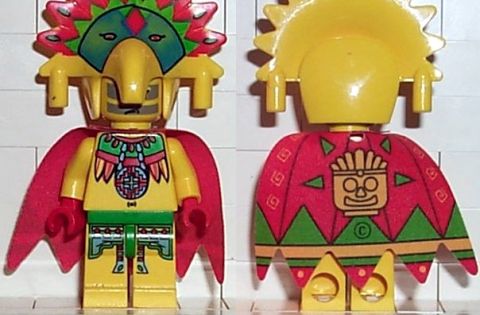 From the year 2000 on the standard triangle cloth capes continue to dominate with an occasional variation for special characters. Two shorter versions of the triangle cape are also introduced to accommodate shorties like Jawas and dwarves. Also, to eliminate fraying, LEGO introduced a new material which is thinner and feels more like paper than cloth. On the plus side, it doesn’t fray like old capes, on the negative side, they are very stiff and feel unnatural. The same material is used for other new cloth elements like skirts and pauldrons.

Some notable specialty capes come with a stand-up collar, which are either made of one piece that requires extra folding, or are made of two pieces; a large one that forms the cape, and a smaller one for the collar that you stack on top pointing upwards.

I have to say that I really-really dislike these triangle shaped cloth capes. The old ones had a nice feel to them, but they frayed easily. The new ones are super stiff and unyielding, and thus look and feel unnatural. When you handle your caped minifigs, they basically feel like they are wrapped in paper. LEGO has been aware of this problem, so in 2015 they introduced a new type of spongy stretchable material that flows better than the starchy fabric capes, while also remaining durable. The new cape has the same shape as the old one and is available in yellow, red, blue, dark-brown and black (illustration from BrickLink). 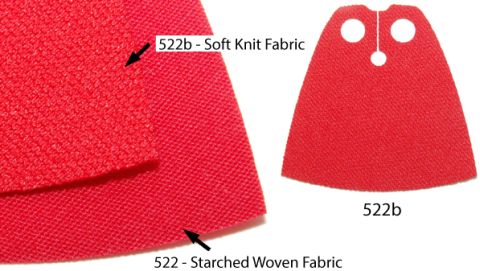 I think LEGO had the full intention of replacing the starchy fabric capes with the new stretchy ones. However there was a problem. The material of the new capes is too thick and thus it bunches up around the neck area, making it look too untidy on most minifigures. LEGO fans complained, and now LEGO continues to produce both the old thin starchy capes and the new thick stretchy capes. 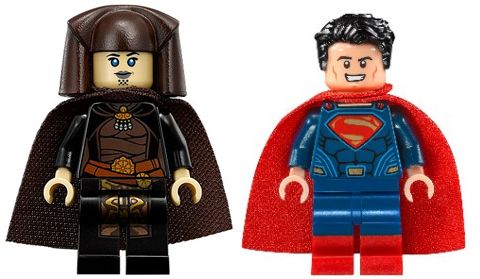 As I said, I really dislike LEGO’s cloth capes because of the unnatural look and feel, however they did recently introduce yet another new material that I’m very excited about. It is the fur-like capes. The first minifig to wear this new cape was the LEGO Minifigures Series 12 Hun Warrior. The cape is soft and flows nicely, and it is not in the way when you handle minifigs because it yields to touch. The outer side of the cape has a slightly fuzzy finish which makes it appear like fur or felt. Because of the thickness, there is only a single larger neck-hole, so instead of the head sitting on top of the cape, it pushes through the neck-hole. 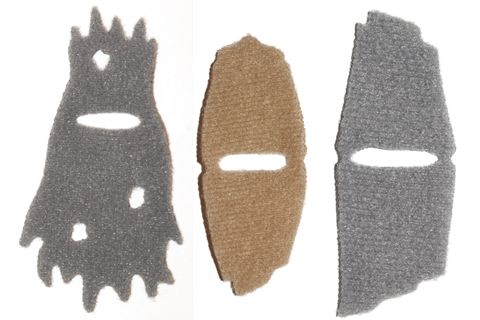 Since I discovered this cape, I have been hunting for more, because this is the first LEGO-made cape material I’m actually excited about. Besides the LEGO Minifigures Series 12 Hun Warrior, other minifigs wearing furry capes are the LEGO Minifigures Series 14 Specter, Qui-Gon Jinn from the #75096 LEGO Star Wars Sith Infiltrator, Princess Leia from the #75094 LEGO Star Wars Imperial Shuttle Tydirium, and Jyn Erso from the #75155 LEGO Star Wars Rebel U-Wing Fighter. They all have different shapes, which is a nice plus. If you would like to try them out, and order some from BrickLink, look for the large oval-shaped neck-hole. It is the telltale sign of these furry capes.

No matter how much I like these new fuzzy capes however, they are not going to become the standard, as they can only represent thick, fur-like cloth. So now we live in the world where stiff thin LEGO capes, stretchy thick LEGO capes, and soft furry LEGO capes coexist. LEGO may never find the solution for the ultimate LEGO cape material, but at least now we have some variety to choose from.

Also, when it comes to capes for your minifig superheroes and villains, LEGO’s own selection is not your only option. There are many LEGO customizers who make printed capes using the same starched fabric material as LEGO. You can ask for pretty much any color and design and they can make printed cloth capes for you. And there are also customizers who make plastic capes for LEGO minifigures. 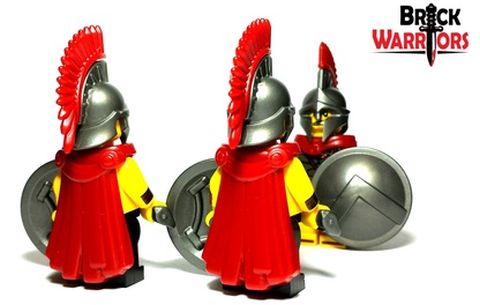 My two favorite cape-makers are BrickWarriors and Arealight. BrickWarriors make plastic capes that are rigid ABS, but fit minifigs perfectly. And Arealight makes soft plastic capes (and other minifig clothing items) with a beautiful wavy shape and enough flexibility to accommodate minifigs to ride horses even with their capes on. I use Arealight’s cape for all of my caped knights and badguys as it has a very generic design, and BrickWarrior’s capes for my Roman legions. And of course LEGO’s furry capes for my minifigs battling cold and rugged climates. 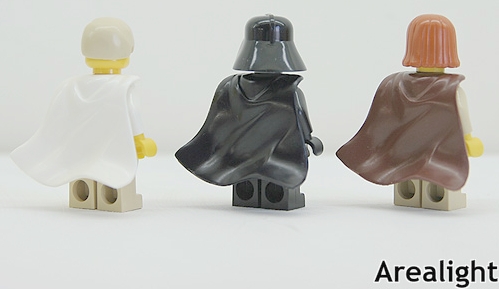 What do you think? Do you like to use capes for your LEGO minifigures? Which generation of LEGO capes do you prefer? Are there any other materials you think LEGO should try for making their capes? Feel free to share your thoughts and discuss in the comment section below! 😉