LEGO minifigure keychains are basically regular LEGO minifigs with body-parts glued together (so they don’t come apart), and a keychain-loop attached through their head via a long screw. It’s a fun way to keep your favorite minifigure with you at all times. I don’t recommend adding them to a large number of keys, as the printing will get scratched up and the plastic marred pretty fast, but if you only carry a couple of keys, or you attach the keychain to your backpack or purse, they will happily follow you on your adventures for a long time. 🙂

There is however something I like even more than regular LEGO minifigure keychains. They are the LEGO minifigure key lights. These are larger versions of LEGO minifigures with a keychain-loop attached to their head, and LED lights in their feet. A barely visible button on their chest turns on the lights (you have to hold down the button – there is no permanent on position).

These LEGO key light minifigs are fully functional. In other words, their head, wrists, arms and legs rotate just like on regular LEGO minifigs. So if you want to have some giants in your LEGO dioramas, you can just remove the keychain-loop. While they can’t hold regular minifig accessories as their hands are too big, some LEGO elements do fit in their hands, as you can see on my picture below. 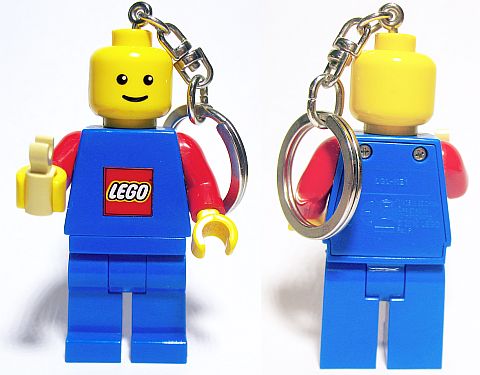 The LEGO key light minifigs are made of a more rigid plastic, so they don’t get damaged as easily as the regular LEGO minifigure keychains. The key lights work with two cell batteries, which can be replaced easily via the panel at the minifigs’ back (attached with a couple of small screws).

The lights are very bright with standard LED bulbs. An interesting feature is that because the lights are inside the feet of the minifigs, and because the legs can be moved just like on regular LEGO minifigs, you can aim the lights in different directions. Very handy when you want to illuminate two different things. (Picture below: regular minifig, key light minifig, LEGO DUPLO figure.) 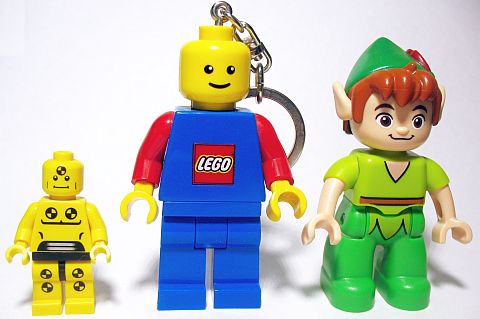 LEGO has been releasing these LEGO key light minifigs in pretty much every theme, and recently they added some new ones. My favorite is the LEGO Spaceman Key Light – especially the blue Benny one. It is also available in red and white.

There are also LEGO Ninjago, LEGO Legends of Chima, and LEGO Nexo Knights key lights, with many of the main characters of each show. 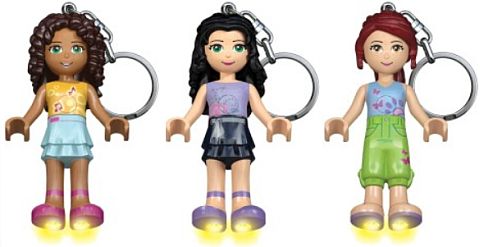 Which minifigs are actually available as a key light is a bit hard to track down, as they are not well documented, and some of them only get released in certain regions, or as store exclusives. Neither Brickset, nor BrickLink are keeping an accurate catalogue of them. I mostly find the key lights by accident at places like Toys’R’Us or Target. Amazon also has a pretty good selection, if you search for “LEGO Key Light”. Here are some of the results I could find: LEGO KEY LIGHTS ON AMAZON

The LEGO minifig key lights are very cute, functional, practical, and hold up better than regular LEGO minifigure keychains. If you would like to add something unique to your LEGO collection, or you are looking for an interesting gift idea for a LEGO fan, check them out. I’m certain that you will be very pleased.

What do you think? Do you have any of the LEGO minifigure key lights? Which one is your favorite? Feel free to share your thoughts and own review in the comment section below! 😉