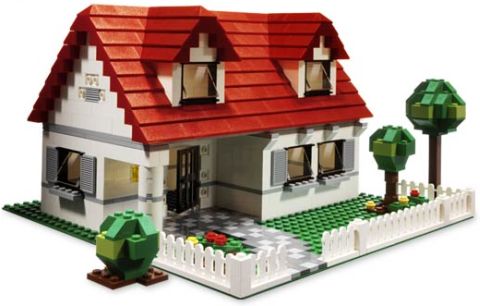 Besides basic slope bricks to build roofs, both LEGO designers and LEGO fans have been coming up with a number of other roofing techniques. Some take advantage of newer LEGO pieces, while others use standard LEGO elements in clever ways. The new curved slope pieces, the small 1×1 and 1×2 “cheese” slopes, and even the 1×1 round bricks are popular choices for roofing. Even simple plates and tiles can be angled to create a sloped roof effect. Below I will show you a few interesting roofing techniques that I have run across that you might like. 🙂 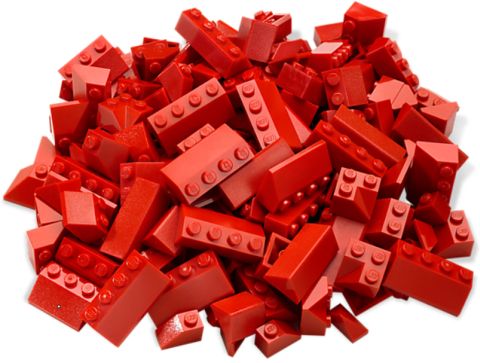 ➡ LEGO ROOF WITH CURVED SLOPES: This is a technique used in a number of official LEGO sets. The #10243 LEGO Creator Parisian Restaurant is one of the best examples. You can study the instruction manual for this set to learn how to use this technique. One important feature to notice is that the curved slopes are staggered to break up the smoothness of the surface and give it some texture. Otherwise the slopes are too smooth and would look unnatural. 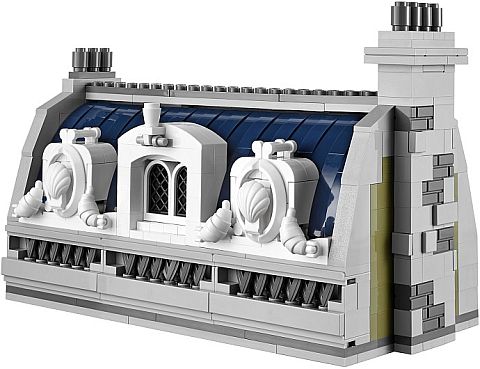 ➡ LEGO ROOF WITH PLATES: One of the easiest and most cost-effective way to build a roof is to just use two large plates in an A-frame shape, with studs facing out. You can add a few tiles, cheese slopes, or even some vegetation to make the surface more interesting. A good example is the #71006 LEGO Simpsons House. If you use the large plates with the tubes facing out, you can get a different texture for variety. An interesting technique is to insert yellow or tan minifig hands into the tubes for a straw roof effect as demonstrated by Geneva in the second picture below. 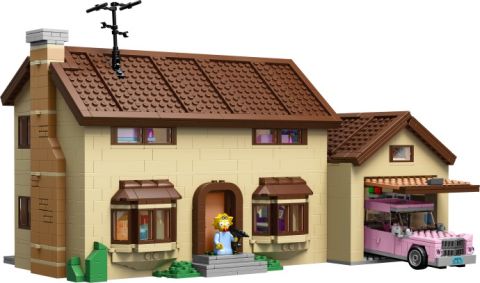 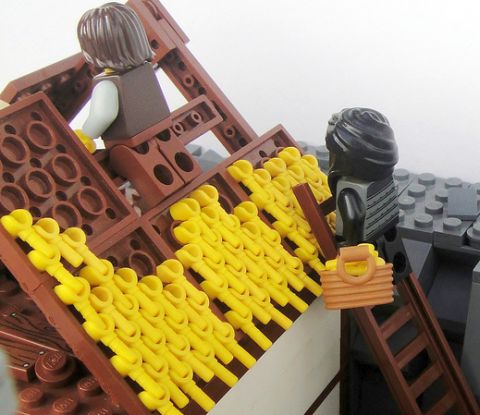 ➡ LEGO ROOF WITH GARAGE DOORS: This is quite an unusual technique used in the #70751 LEGO Ninjago Temple of Airjitzu. Because the garage door panels are flexible, you can create pretty much any round shape, by simple fixing the garage doors at the peak of the roof, and then draping them over the rest of the building. 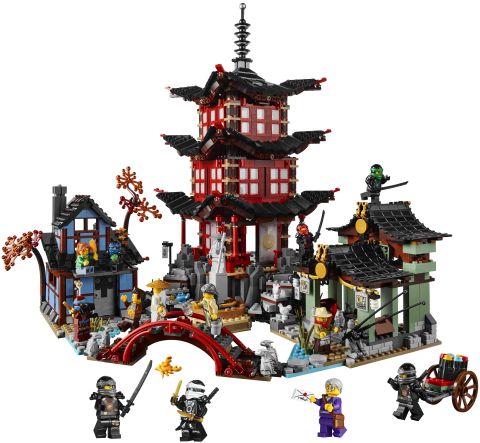 ➡ LEGO ROOF SHINGLES WITH TILES: Standard LEGO tiles can be used as roof shingles. However if you just place them flat on a plate, they will look too smooth (like a tile floor). Staggering the plates is one way to make them appear more realistic, or you can also stack them (first image below by Siercon & Coral – video tutorial here). Tilting the plates is another way to break up their smooth surface for a corrugated roof effect (second image by Tim Gould). Another nice technique is to use round tiles, which gives the roof a storybook-like look (third image by Parks and Wrecked Creations). 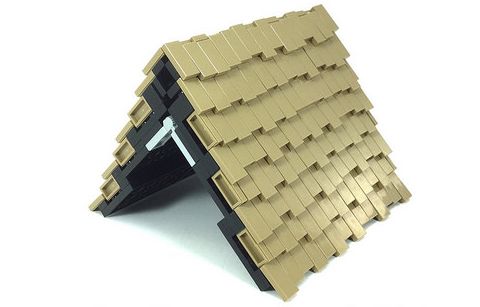 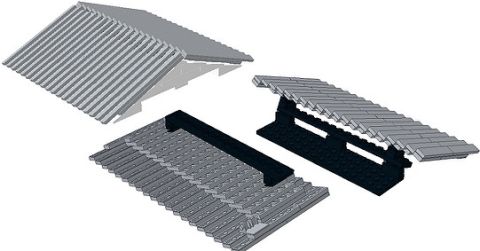 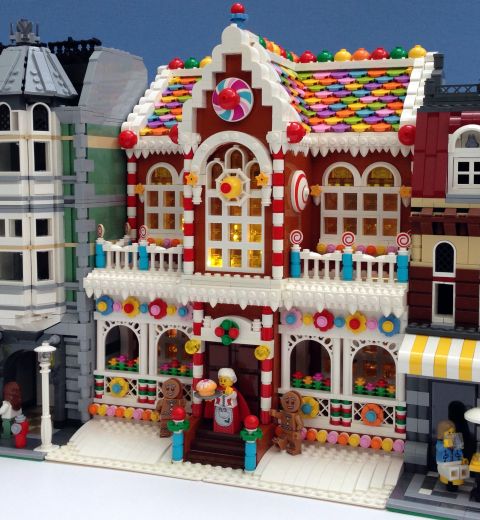 ➡ LEGO ROOF SHINGLES WITH CHEESE SLOPES: 1×1 and 1×2 “cheese” slopes are fairly new pieces, and they are excellent for roofing because of their shape and myriad of color choices. They can be simply attached to an angled plate, or you can use a more advanced technique, as pictured below by The Brick Time Team. This solution works particularly well on medieval buildings and small shacks. 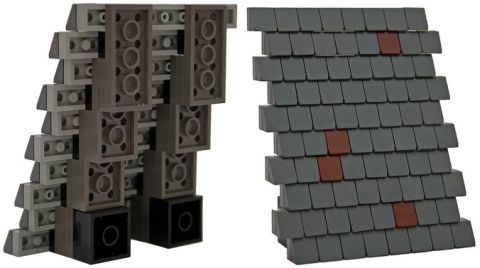 ➡ LEGO ROOF SHINGLES WITH MODIFIED SLOPES: This technique was shared by LEGO designer Mark Stafford, using some of the newish 2×2 modified slopes with cutouts. The final result is similar than what you can achieve with the 1×1 cheese-slopes. 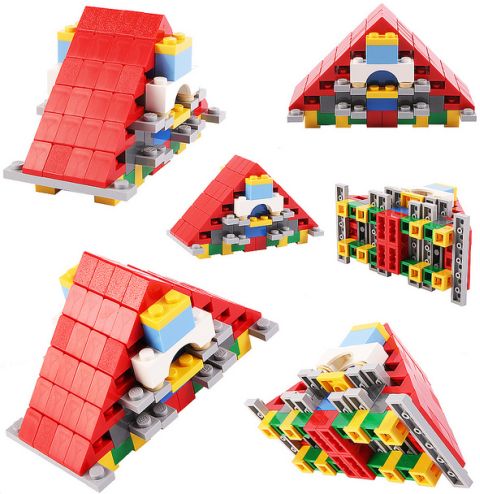 ➡ LEGO ROOF SHINGLES WITH ROUND BRICKS: This technique is very popular for Asian and Mediterranean style buildings. In an official LEGO set an excellent example is the #10232 LEGO Creator Palace Cinema. Because the round bricks have hollow studs, you can push a rod through them to add more rigidity. And if you want a more curved effect, like on an Asian buildings, you can run a flexible tube through the round bricks, and prop up the bottom rows. (Second image by Paul Trach.) A variation of this technique is to use 1×1 cone pieces instead of round bricks, as demonstrated by o0ger in the third picture below. 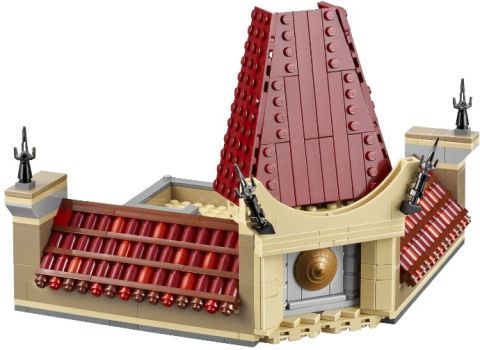 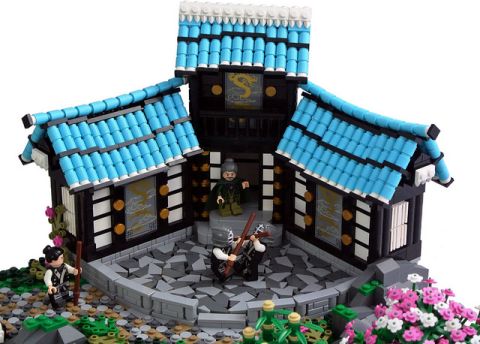 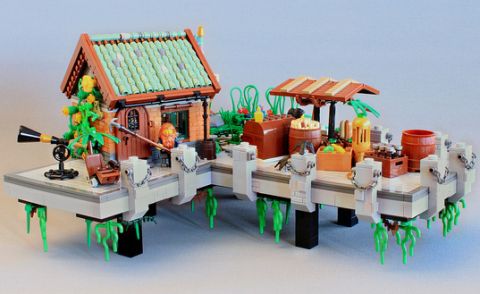 ➡ LEGO ROOF SHINGLES WITH FLIPPERS: LEGO minifig flippers happen to make great roof shingles, as you can see in the image below by Barney Main. Flippers are particularly great for shacks, cottages and debilitated houses. They come in a number of useful colors like black, light-gray, blue, dark-purple, red, yellow, black, orange and lime, so you have plenty of options for roofing. 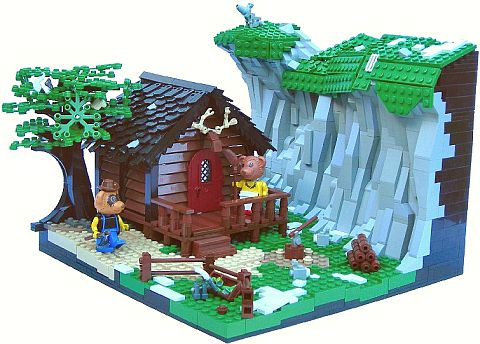 ➡ LEGO ROOF SUPPORT WITH LADDERS: This technique was shared by LEGO fan Adeel Zubair. It is used with standard LEGO roof pieces, which are quite sturdy on their own, but by adding one-piece staircases under the roof the structure gets additional support, plus the staircases mimic the look of rafters, as demonstrated on the picture below. If you plan to make the inside of an attic visible, this is a great solution. 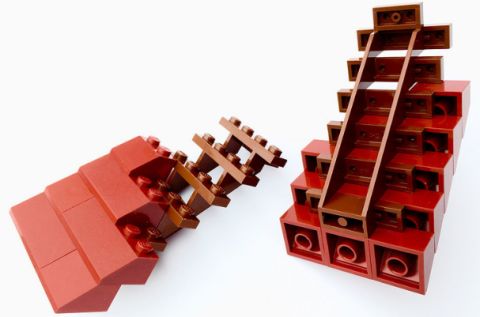 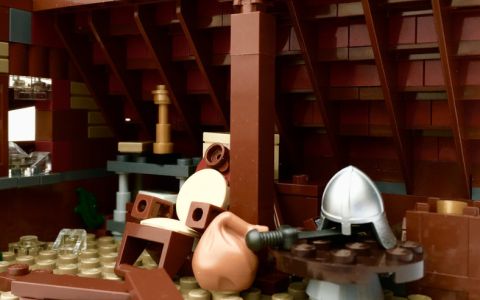 As you can see, there are many ways to make LEGO roofs, from simple to elaborate, pretty much being able to imitate all real-life roofing styles. The techniques mentioned above are well-established and have been successfully used by a number of LEGO fans. There are also many esoteric methods using pieces in clever ways that I haven’t covered here, and of course you can also experiment on your own.

What do you think? Do you have any favorite LEGO roofing techniques from official LEGO sets or from other LEGO fans? Feel free to share and discuss in the comment section below! 😉