LEGO recently released five new LEGO Elves sets, corresponding with Part 3 of the LEGO Elves webisodes. This time, Emily Jones is joined by her little sister, Sophie Jones. And just like all annoying little sisters, Sophie follows her big sis around, ends up in places she not supposed to be, and gets into lots of trouble. In other words, typical siblings stuff, sparkled with the magic of the elves. 🙂 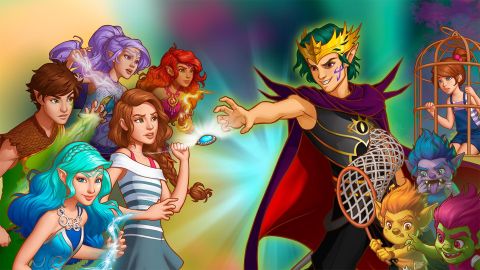 While the LEGO Elves sets can be enjoyed just for their beauty, creativity, and unique elements, it is worth looking at the story as well, to understand what each of the new sets represents. In the playlist below, I have included for you the LEGO Elves: The Capture of Sophie Jones trailer and all of the webisodes released so far. If you are just casually interested in the story, watching the trailer should be enough. And if you want to learn everything about the new characters and adventures, you can also watch all of the episodes.

If you have been following the LEGO Elves story up to this point, you know that Emily Jones inherited a magical amulet from her grandmother, which gives her access to a portal to Elvendale. However, it is not just all of fun and games at the land of magic. Emily has been assisting the elves in a number of ways, dealing with evil forces, runaway dragons, and now, goblins. Emily also inherited the responsibility of protecting the portal from intruders, and of the peaceful coexistence of elves and humans. Then, one day, her little sister sneaks in through the portal, creating much trouble for herself, her sister, and the elves. And that’s where we are now in the story. Below are the five new sets, as well as video-reviews on each of them. 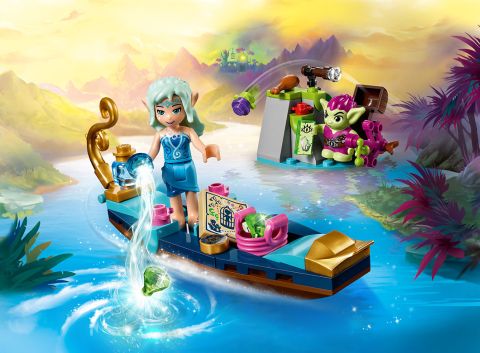 ➡ #41181 LEGO ELVES NAIDA’S GONDOLA & THE GOBLIN THIEF: This is the smallest set in the 2017 LEGO Elves line. It includes a lovely little gondola, Naida wearing a new outfit, a goblin, and a little landscape. It’s nice to see that the gondola has the same color-scheme and style as the #41073 LEGO Elves Naida’s Epic Adventure Ship. Here is the official description: Join the exciting new adventures in Elvendale with Naida the water elf as she goes in search of rare ingredients and crystals in the unexplored goblin forest. Ride the river in her gondola with a seat, basket with crystals, map and a compass. Defend the crystals from Roblin the Goblin on the island with its spyglass, evil instructions and hidden catapult with evil seeds. Includes a Naida mini-doll figure and Roblin the Goblin figure. 67 pieces. Price: $9.99 – BUY HERE 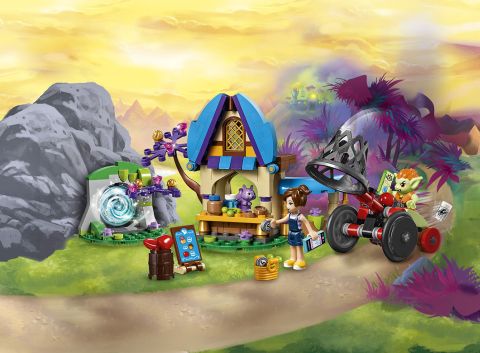 ➡ #41182 LEGO ELVES THE CAPTURE OF SOPHIE JONES: This set includes pretty much everything related to Sophie Jones; the portal she sneaked through, her interactions with the squirrel store owner Mr. Spry, and her eventual capture by the goblins. While I love the set for all of the lovely colors and accessories, and I do like Sophie Jones, I find it disappointing that LEGO decided to use a regular mini-doll to represent her. She is clearly much younger and shorter in the film. than her big sister. This was a missed opportunity by LEGO to make shorter mini-dolls representing younger siblings. Here is the official description: Join the exciting new adventures in Elvendale with Sophie Jones, as she sneaks through the magic portal and visits Mr. Spry’s grocery store. This set features a store with price list, groceries, a bed on the second level, as well as a hidden magic portal and a goblin capture-mobile with a lowering net. Includes a Sophie Jones mini-doll figure, plus Barblin the Goblin and Mr. Spry the squirrel figures. 226 pieces. Price: $19.99 – BUY HERE 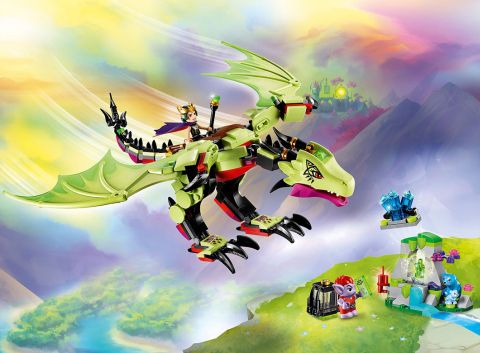 ➡ #41183 LEGO ELVES THE GOBLIN KING’S EVIL DRAGON: The stars of the 2016 LEGO Elves sets were definitely the dragons. While this year the focus is on goblins, LEGO managed to sneak in another beautiful dragon as well. This dragon is a lighter shade of green than the earth dragon in the previously released #41176 LEGO Elves the Secret Market Place set, and is also tinged with a bit of black to represent evil influence. If you watched the episodes you know that both the dragon’s and the Goblin king’s story are quite sad, and I hope that eventually they will be able to get back to their normal selves. Right now, however, they are super bad, bent on taking over the world of both the elves and humans. Here is the official description: Join the exciting new adventures in Elvendale with Cronan Darkroot the Goblin King as he goes in search of crystals to power his evil portal. Fly on the back of Ashwing, with a cage for crystals, and posable wings with gripping claws, plus a crystal cave with hiding place for Lil’ Blu and an explosion function to reveal a crystal. Includes a Goblin King mini-doll figure, plus Ashwing the earth dragon, Jimblin the Goblin, Blubeary and Lil’ Blu. 339 pieces. Price: $29.99 – BUY HERE 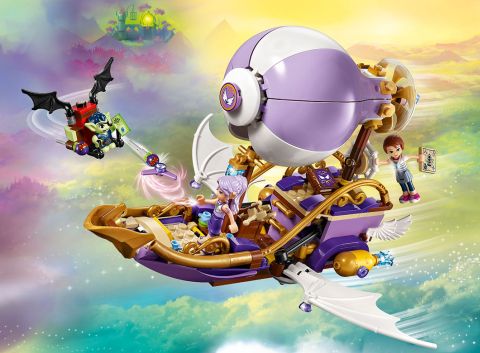 ➡ #41184 LEGO ELVES AIRA’S AIRSHIP & THE AMULET CHASE: This set is also similar in style to the #41073 LEGO Elves Naida’s Epic Adventure Ship, and could easily be converted into a traditional ship, if you like. And it is also reminiscent of the #70603 LEGO Ninjago Raid Zeppelin with the use of the hot air balloon pieces. Just look at all those gorgeous curvy gold pieces! This set is a goldmine of interesting parts! Here is the official description: Join the exciting new adventures in Elvendale as Emily Jones and Aira Windwhistler the wind elf search for Emily’s stolen amulet and her sister, Sophie Jones. Fly in Aira’s airship, with spinning propeller, space for two mini-doll figures, extending wings and a crossbow, and avoid Dukelin the Goblin on the goblin glider with movable wings, evil seed shooters and opening hatch with small storage space. Includes two mini-doll figures: Emily Jones and Aira the wind elf, plus Dukelin the Goblin. 343 pieces. Price: $39.99 – BUY HERE 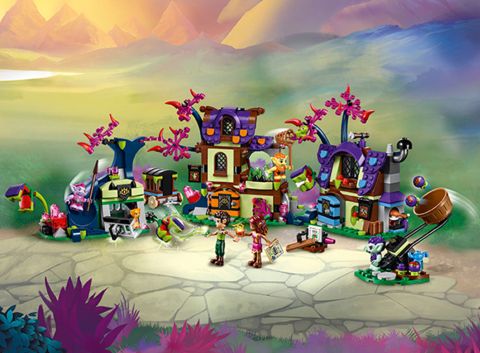 ➡ #41185 LEGO ELVES MAGIC RESCUE FROM THE GOBLIN VILLAGE: This set looks like a page from a storybook! So many lovely details, colors and accessories! It includes three little goblin houses, each on a separate base, so you can set up your goblin village in whichever way you like. This is one of my most favorite LEGO Elves sets to date. There is so much potential for expanding the scene for a whole goblin village diorama! Here is the official description: Take part in exciting new Elvendale adventures in the Goblin Village, featuring three buildings loaded with accessories, including a crystal workshop with magnifying glass and rotating crystal platform, cage-making workshop with lookout perch and dungeon with exploding gate function, activated by pulling down on the plant. Includes two mini-doll figures: Azari and Farran, plus three goblin figures: Bieblin, Fibblin and Smilin, and Panthara the Panther and Hidee the Chameleon figures. 637 pieces. Price: $59.99 – BUY HERE

The LEGO Elves theme consistently produced some of the most gorgeous sets LEGO ever released, with an enchanting story-line, lovely characters, beautiful colors, and interesting pieces. The sets are also in an affordable price-range with a good price-per-piece ratio. I highly recommend checking them out. You can find both the current sets and some of the older ones under the LEGO Elves section of the Online LEGO Shop. 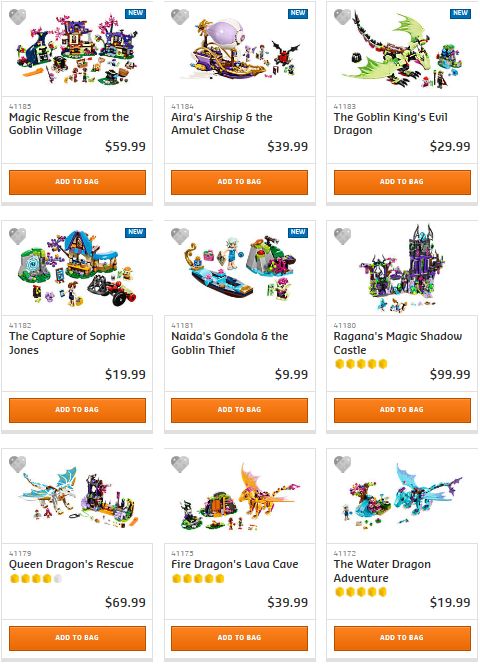 What do you think? How do you like the LEGO Elves collection? And what do you think of the new sets? Feel free to share your thoughts and own review in the comment section below! 😉