LEGO recently released six new LEGO Marvel Super Heroes sets, which are worth checking out. The LEGO Super Heroes lines mostly appeal to minifig collectors due to the unique superhero and villain characters. The small to medium size sets tend to be a bit weak in design, but occasionally there are some nicer sets that can be interesting to builders as well. So let’s take a closer look at the new selection! 🙂 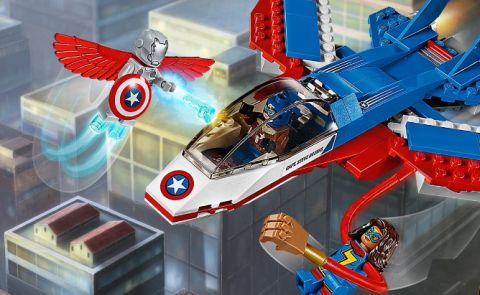 ➡ #76076 LEGO SUPER HEROES CAPTAIN AMERICA JET PURSUIT: The star of this set is obviously Ms. Marvel with her super-extending arms. She is a weird looking minifigure, but you can do some fun stuff with the arm piece; like tying it in a knot, or using it to throw long-range punches. Unfortunately, the piece cannot be removed from the torso without cutting it, which is a major miss in the design of this part in my opinion. While the jet is plain looking, the action-features work well, and I think it has a nice shape too as a generic jet. Also, notice those interesting new Power Blast pieces in the hands of Super-Adaptoid. It is a very cleverly designed piece that allows minifigs to shoot directly from their hands (see the video-review below for demonstration). It also doesn’t seem to be as damaging to minifigs as the previously included Super Jumpers. The price of this set is also very reasonable for what you get. Here is the official description: Ms. Marvel is on a mission to help retrieve Captain America’s shield from Super-Adaptoid, who is shooting back with his Power Blasts. Use her super-extending arms to attach her to the jet, which features movable wings for flying and attack modes, a minifigure cockpit with space for a shield, and dual disc shooters. Includes three minifigures: Pilot Captain America, Ms. Marvel and Super-Adaptoid. 160 pieces. Price: $19.99 – BUY HERE 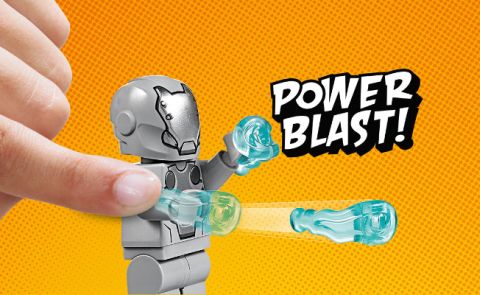 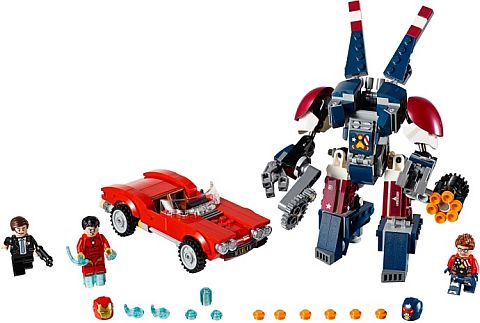 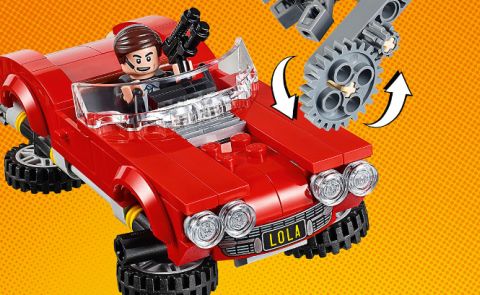 ➡ #76078 LEGO SUPER HEROES HULK VS. RED HULK: While the previous two sets are an excellent value for the money, this set goes the opposite direction with a price that just doesn’t make any sense. Don’t get me wrong, the minifigs and bigfigs are very nice and collectors should be happy with them, but the vehicles are more like cheap toys for little kids. If you are interested in the minifigures, I would wait until this set goes on sale. At half price it would make a lot more sense. You can watch JANGBRiCKS’ review below with more details. Here is the official description: Pitch Team Hulk against Team Red Hulk in this sturdy LEGO Marvel Super Heroes set. Fit the characters onto their tough vehicles and crash them into each other to send the big figures flying into battle. For even more fun battle action, fire the vehicle-mounted twin stud shooters and six-stud shooter. Includes She-Hulk and Red She-Hulk minifigures, plus Hulk and Red Hulk big figures. 375 pieces. Price: $59.99 – BUY HERE 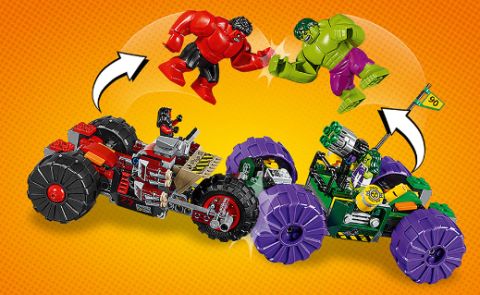 ➡ #76079 LEGO SUPER HEROES RAVAGER ATTACK: This set is similar to the #76076 LEGO Super Heroes Captain America Jet Pursuit in that both come with a jet and three minifigures. As the jet is smaller here, we also get a small tree to represent a forest hiding place. Both the tree and the jet are on the weak side in my opinion, however we do get three unique minifigures. It is interesting to note that Rocket got a new head-mould, which is very similar to the old one, but with no mouth line. I’m not sure why LEGO went through the trouble of making it. Mantis comes with a rubbery hairpiece with two little antennas, and she is pretty cute. Here is the official description: Stage a forest face-off between Taserface in his M-ship, featuring four stud shooters and a minifigure cockpit, and Rocket and Mantis, who are hiding in the forest setting featuring a buildable tree with branch elements. Help the two Guardians of the Galaxy build the six-stud shooter, then fire at the approaching M-ship and work as a team to fend off the Ravagers. Includes three minifigures: Mantis, Rocket and Taserface. 197 pieces. Price: $19.99 – BUY HERE 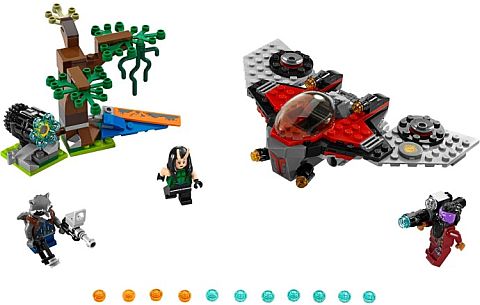 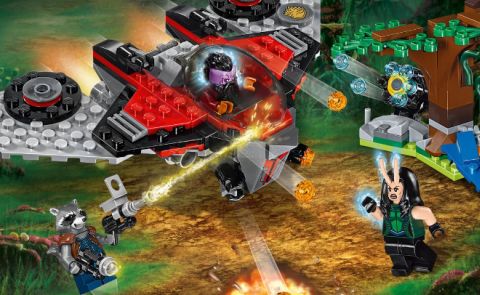 ➡ #76080 LEGO SUPER HEROES AYESHA’S REVENGE: This is one of the medium-ish size sets with a unusual looking spaceship, a large drone, three minifigures, and the star of the set; baby Groot in Ravager costume. Besides the unique minifigs there is not a whole lot of play-value here, although the ship does have some interesting features. You can watch the video-review below to see how it works. Here is the official description: Stage a cosmic battle with this action-packed Guardians of the Galaxy set featuring Ayesha’s Golden Drone spaceship with two stud shooters, and Yondu’s Laser Drill spaceship with a spring-loaded missile, sliding minifigure cockpit and opening side panels. Includes three minifigures: Yondu, Star-Lord and Ayesha, plus a Groot figure with Ravager decoration. 323 pieces. Price: $29.99 – BUY HERE 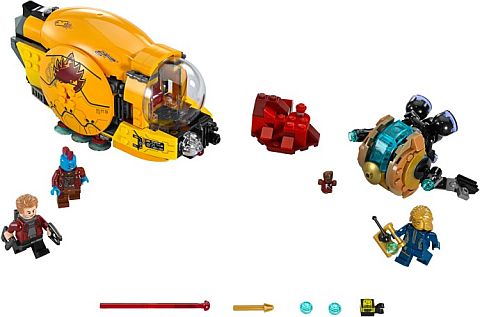 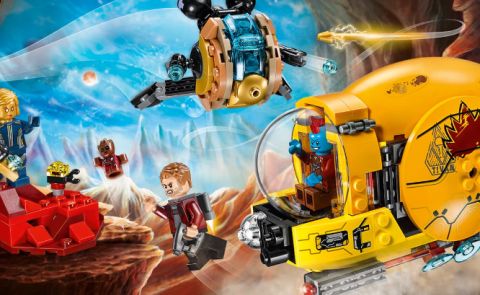 ➡ #76081 LEGO SUPER HEROES THE MILANO VS. THE ABILISK: This set includes an updated version of the Milano that was originally released in 2014 in the #76021 LEGO Super Heroes Milano Spaceship Rescue. The new version of the Milano is smaller, but it does have some nice upgrades. The printed windscreen looks particularly great, and the new color-scheme is quite pleasing. The Abilisk works well, and I like all those sharp teeth! Unfortunately, some of the minifigures are a step back from the previous versions. Star-Lord and Gamora wear the exact same outfit, and the previously beautiful printing on Drax is now very smudged. My understanding is that this is not a printing error that effects some of the sets, but an overall downgrade of the print quality for this minifigure. However we get another baby Groot here, which is a highlight. Here is the official description: Get set for an epic space battle as Star-Lord and his unlikely allies take on the Abilisk, featuring the Milano spaceship with two stud shooters, bomb-drop function, movable wings and an opening four-minifigure cockpit. The Abilisk monster features moving tentacles and an opening mouth to role-play a daring rescue mission. Includes four minifigures: Star-Lord, Gamora, Nebula and Drax, plus a Groot figure. 460 pieces. Price: $49.99 – BUY HERE 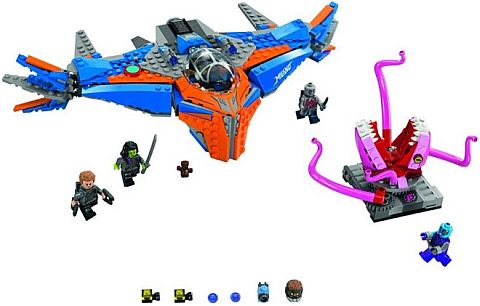 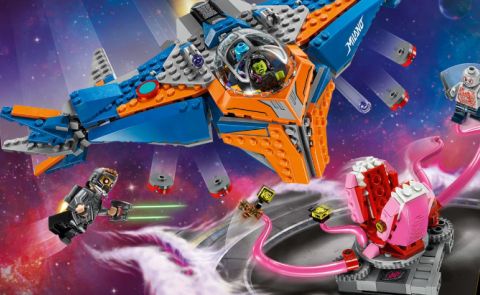 In the video-player below you can watch detailed reviews of the new LEGO Marvel Super Heroes sets. It’s a great way to see all the play-features and also take a closer look at the minifigs.

As you can see, there are some hits and misses in this wave of LEGO Marvel Super Heroes sets. I would say that the #76076 Lego Super Heroes Captain America Jet Pursuit, and the #76077 Lego Super Heroes Iron Man: Detroit Steel Srikes are good sets with nice minifigs, good designs, and fun play-features – all for an excellent price. If you don’t have the previously released Milano, the #76081 LEGO Super Heroes The Milano vs. The Abilisk is a solid option. There are unique minifigures in the other sets also, but because the sets themselves are on the weak side, it may not be worth getting them at full price. However, in some way or another, try to get baby Groot. He is very cute. You can find all the new sets under the LEGO Marvel Super Heroes section of the Online LEGO Shop. 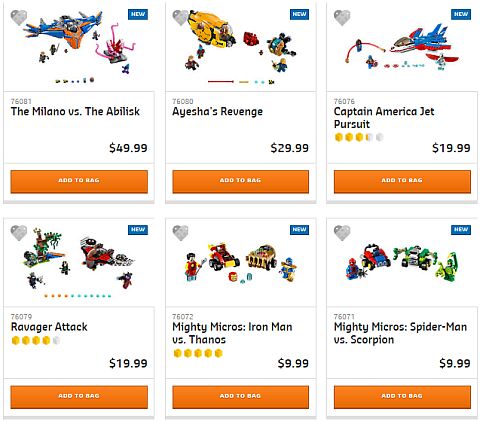 What do you think? How do you like the new LEGO Marvel Super Heroes sets? Do you have a favorite? Are you planning to get any of them? Or do you just collect the minifigures? Feel free to share your thoughts and own review in the comment section below! 😉