If you participated in helping to fund i-Brix, the revolutionary wireless lighting system for LEGO bricks via KickStarter (see: i-Brix LEGO Lights Without Wires are Back!), or you have been just curious about the project, there are some exciting updates for you. While the first KickStarter campaign for i-Brix did not meet its funding goal, the second campaign was very successful with 940 backers who pledged just about 120k to help bring the project to life. Since the closing of the campaign, Dustin Culton and his team have been working hard to finalize the design and production of the first i-Brix units. Dustin recently posted an update on the status of the project to let backers know what they can expect. I know many of our readers are interested in i-Brix, so I thought to share the update here as well. 🙂 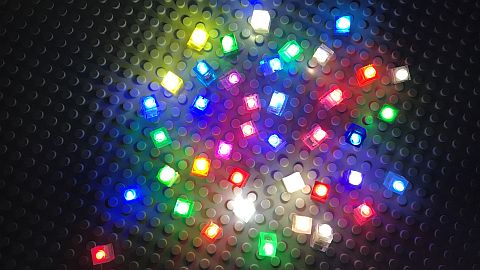 Hello fellow i-Brix supporters – we know it’s been some time since the last update, and we appreciate all of your support and patience. As most of you likely know, KickStarter is an amazing venue for concepts such as i-Brix to get their feet off the ground and build a fan base in advance of high volume, mass production. We have been fortunate to receive so much support and feedback from the Kickstarter community and are excited to provide you with the latest news on our progress with i-Brix. Since successfully funding the project, we have been working towards wrapping up the final design work needed to go into production with a reliable product for our backers. During the past several months, there have been a few major milestones reached that we feel are important to share with you all.

I-BRIX RECEIVER CIRCUITRY: The original design of the receiver was too large to fit inside a standard 1×1 brick and would require the plastic of the brick to actually be molded around the receiver circuit. When we went to manufacture the first batch, we found that even with low-temperature molding, the process was too hot and was adversely affecting the receiver circuitry. The good news is that we have designed a new receiver circuit that allows it to be inserted into a standard brick while maintaining the distance! (One surprise development that will also be coming is the offering of round 1x1x1 pieces!) If you happened to have an opportunity to visit our booth at Bricks-By-the-Bay, you may have had a chance to hold a few of our sample 1×1 bricks. The majority of those samples had been modified to accommodate our receiver circuitry (cut, hollowed out, etc). Being able to manufacture our i-Brix receivers without molding around the electronics is a huge win!

I-BRIX TRANSMITTER ANTENNA TUNING: The biggest challenge in manufacturing the antennas in large volume is keeping their tolerances within specification. The antennas have to be held to a very tight tolerance in order to maximize the distance in which the bricks can light up. We have been working very hard with our manufacturer to develop a process that is very repeatable. We believe we have now reached a place where we can begin manufacturing antennas in high quantities with accuracy and consistency.

Delivering our product quickly is important, however, shipping a reliable product that meets our backer’s expectations in the long run is a higher priority for us. We are excited to say we are achieving several critical goals and have been impressed with our engineering team exceeding some of our original targets (for brick design and antenna performance). We are full-steam ahead on getting this wrapped up so we can begin delivering product as soon as possible. With that being said, we will likely not be shipping systems before Christmas 2017. At this time, we anticipate a first quarter 2018 delivery to our backers. Again, we appreciate all of our supporters and look forward to continuing to provide updates and details on the systems as we get closer to volume production. This will also include sending out the backer survey to collect the pertinent data required to ship you your products.

As you can see, the good news is that Dustin and his team area making progress in finalizing the design of the i-Brix units. I’m particularly excited about the addition of round bricks! The less good news is that the project is somewhat delayed, and we won’t be seeing i-Brix until the first quarter of next year (the original projected timeline for delivering the first batch was by the end of this year). This is not a huge delay however, so there is no reason to worry. It’s better that backers receive quality products than rushing the production process.

I’m super excited about i-Brix, and have backed the project personally during the KickStarter campaign. Wireless lighting for LEGO has been something I have been wishing for a long time. I hope that i-Brix is going to be as awesome as Dustin envisioned it, and we will have a chance to try it out soon! If you are not familiar with I-Brix, I’m including below JANGBRiCKS’ review of an early version of the i-Brix prototype. I think you will see why so many LEGO fans are excited about this project.

What do you think? Have you been following the progress of i-Brix? Did you participate in the KickStarter campaign? What lighting system do you currently use with your LEGO creations? Feel free to share your thoughts and discuss in the comment section below! 😉