by Thita (admin) on December 18, 2017
in Featured LEGO Creations

Sometimes those new to the LEGO hobby and people with a smaller LEGO collection get a little discouraged when they see the impressive large displays and dioramas of other LEGO fans. This is one of the reasons I like to regularly feature examples of micro-building with LEGO. Micro-building doesn’t require having a lot of parts, but it is more about thoughtful placement and clever usage of the pieces you already have. LEGO themselves runs a series of tutorials for building on a small scale (see links at the end of this post), and the LEGO Architecture line is a good example of what can be achieved on a small scale with relatively few pieces. And, of course, there are many examples of micro-building from the LEGO fan community. 🙂 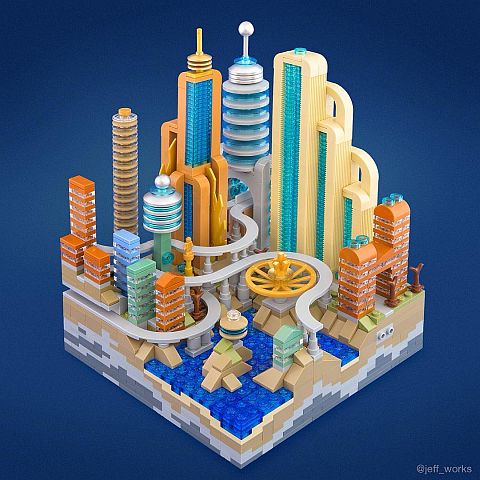 Recently, the BrothersBrick featured the work of LEGO fan Jeff Friesen (see: Time to Travel to Beautiful Cityscapes), who is not just a master of micro-building, but an expert at using shape and color. I was so impressed with Jeff’s creations, that I thought to share some of them with you here as well. The futuristic city on the first picture above was built on a 20×20 stud base, and was inspired by the new curved tile pieces. Jeff said he first saw the new tiles in the LEGO lettering contest by New Elementary (see: Lettering with LEGO Using New Tile Shapes), and he immediately imagined them as elevated highways in a micro-scale city. Once creating the loops of the highway, the city naturally grew around it. 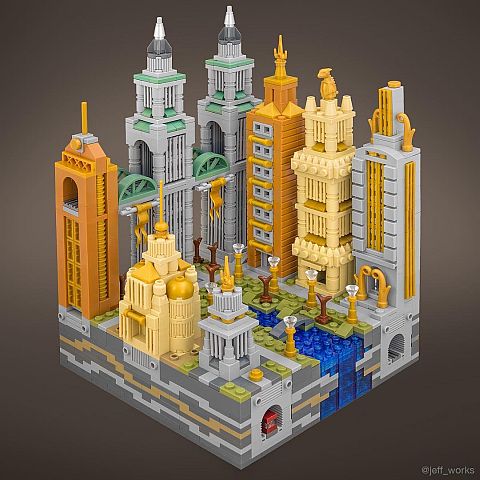 The next three vignettes are variations of similar cityscapes, with a mix of both classic and modern style architecture. They all feature a central canal with a suspension bridge, surrounded by high-rise buildings. Notice that many of the structures are simply stacked plates, but because of the careful choice of colors and some decorations, they really come alive. Also, don’t miss the tiny trains both on the overhead bridges and underground!

Jeff also built a couple of fully futuristic cities, using mostly white and turquoise rounded shapes, surrounded by some green pieces to represent landscaping. Jeff shares that he gathered in a pile all the curved pieces he had, and just started putting them together. Over time, the haphazard constructions evolved into what you see here. He says that “it was like chicken scratches slowly taking the form of a balanced drawing”. Just to show that even though the end result looks carefully planned, the design process is actually a mixture of experimentation, vision, and happy little accidents (as Bob Ross would say).

Continuing to progress into the future, the city above is from the distant future, with even more modern, almost alien shapes. Jeff took advantage of lots of little pieces and accessories with interesting designs; like binoculars, frying pans, gears, clips, wheels, propellers, lightsaber hilts, and jackhammers. The micro-city worked on by minifigs really puts the size into perspective; it looks big, but it is actually very tiny. 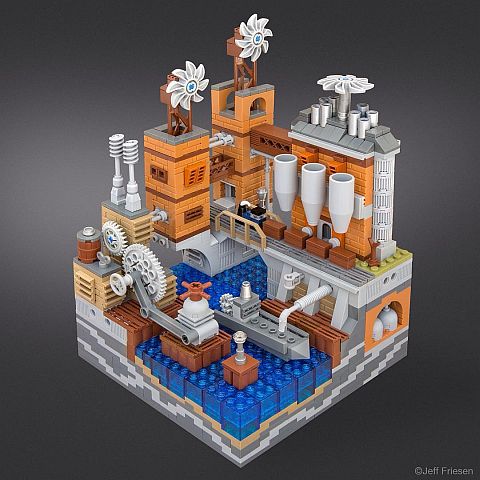 Going back to the past, Jeff pays homage to the Industrial Age. He shares: “If you can overlook the smog, hard labor, and environmental catastrophes of the Industrial Age, the era was a rich source of architectural wonders. Massive brick buildings loomed overhead like the great temples of antiquity. While industrial buildings are not decorative in nature, their maze-like complexity and sheer bulk does give a sense of awe.” 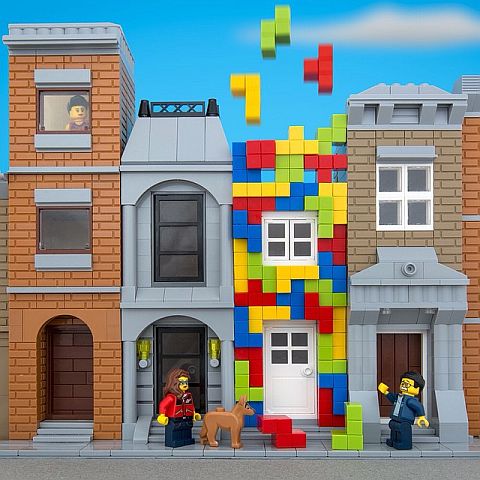 Jeff shares many other wonderful LEGO creations (both micro-scale and minifigure-scale) under his Instagram profile. As you will see, none of his work is very large or use a lot of pieces, but are more focused on thoughtful selection of parts and colors, careful posing, and excellent photography. So, whether you have lots of LEGO parts, or only a handful, you have an opportunity to build entire worlds. So, give it a try! And if you need something to start with to build your own tiny cities, you might consider checking out the LEGO Architecture collection, particularly the LEGO Architecture Skyline Series. You can find the sets at the LEGO Architecture section of the Online LEGO Shop. 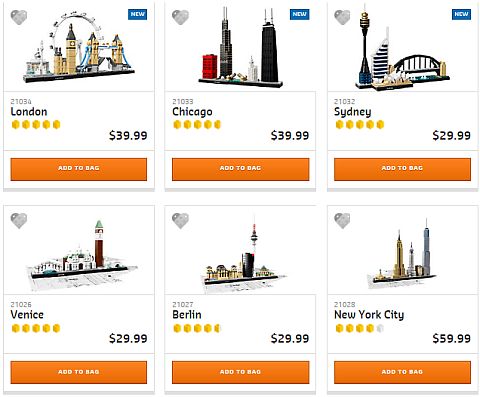 What do you think? How do you like these LEGO micro-scale cities? Which one is your favorite? Did you notice any interesting use of parts that you really like? Have you tried micro-building yourself? Or, do you prefer to build in minifigure-scale? Feel free to share your thoughts and own creations in the comment section below! 😉