A few days ago, I ran across a video-review by JANGBRiCKS (see below) about a LEGO City Playmat I was not familiar with and found interesting. According to the Brickset database, both the #853656 LEGO City Playmat and the very similar #853671 LEGO Friends Heartlake City Playmat were released last year, but until seeing JANG’s recent review, I wasn’t aware of their existence. JANG liked the LEGO City Playmat, and I liked what I saw in the review, so I ordered a couple to give them a try. 🙂 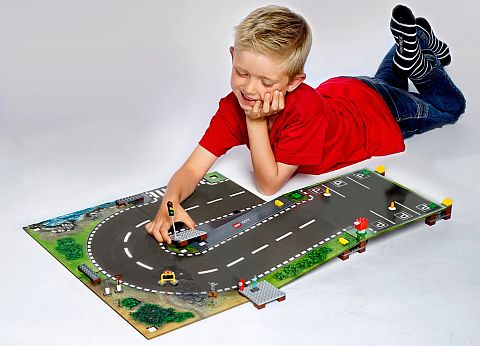 LEGO has been releasing playmats at least since the late 1980s, possibly even earlier. They are usually made of cloth, paper, plastic, or cardboard. Many of them are quite large, and could be folded up for storage. Speaking of storage, some of the playmats even double as storage bags or boxes by either folding up the sides, or drawing the edges together with a string. The flat storage mats are most often double-sided to provide different terrain/road prints. LEGO playmats are a great way to provide a nice platform for a LEGO layout, or a perfect surface for play. 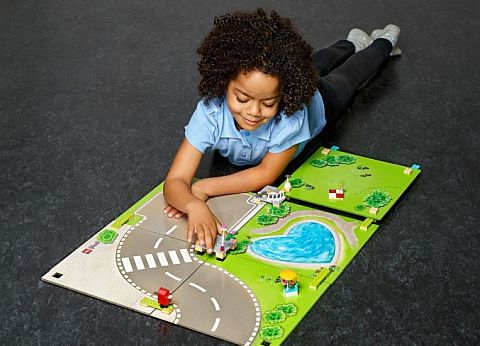 While the #853656 LEGO City Playmat and the #853671 LEGO Friends Heartlake City Playmat are made of cardboard, like some of the previously released playmats, they have one very unique feature; instead of being one foldable mat, they are made up of five connectable pieces. 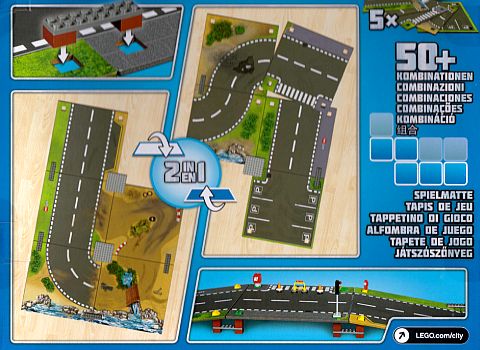 Because the five pieces are printed with different terrains on both sides, and can be connected in a variety of ways, a single playmat set can provide over 50 layout variations! This makes the #853656 LEGO City Playmat, and the #853671 LEGO Friends Heartlake City Playmat the most versatile to date! You can use either side of the pieces, you can connect them on any of their sides, you can lay them out in one long and narrow surface, rectangle, L-shape, T-shape, or whatever else you like. The combinations are virtually endless, especially if you get a second of the same playmat set (which would allow you to use all ten different terrain prints at the same time). 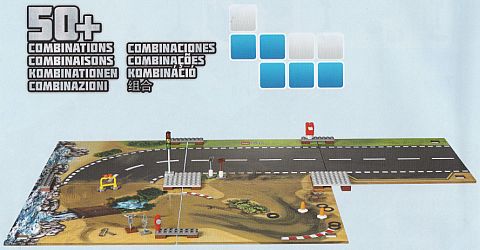 Due to the playmats being made of separate pieces, they don’t need any folding creases for storage. This allows the construction to be made of very thick and sturdy cardboard that is non-bendable and basically feels like plastic. As mentioned above, both sides of the pieces are laminated with different terrain designs, so there are ten designs in each set. Even the edges are fully and seamlessly wrapped! The only place you can see that the pieces are made of cardboard is the inner edges of the square connector holes. This is high quality stuff that won’t get warped or easily damaged. Although I haven’t tried, my guess is that you can also wipe them down with a slightly damp cloth, in case they get soiled during play. 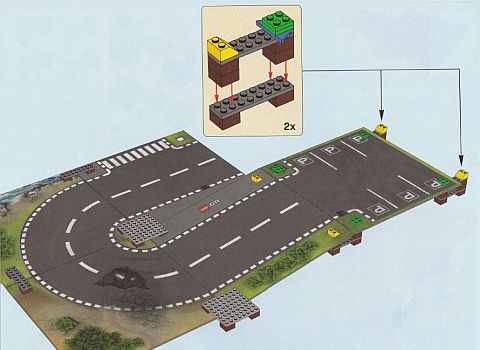 Each playmat piece measures 10×10 inches, or about 25×25 cm. The online description states they are over 9×9 inches, but they are in fact exactly 10 inches on each side, and are the same size as a standard 32×32 baseplate. As you will see in JANGBRiCKS video-review below, they can be placed next to 32×32 baseplates, however the height won’t match. You will need to place something under the thin baseplates to lift them up just a bit. 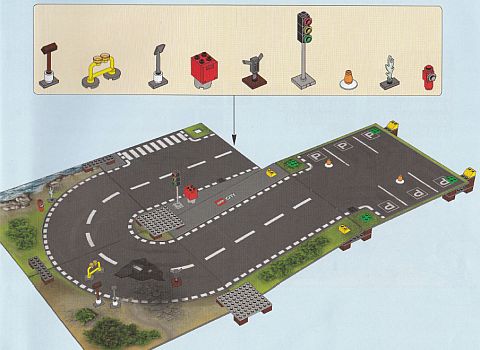 Besides the five playmat pieces, the LEGO playmat sets also include about 100 standard LEGO elements. The most essential of these are the LEGO 2×2 bricks and various size plates to connect the playmat pieces. The bricks and plates can also be used to build columns to elevate some of the playmats, and thus create a sloping or elevated terrain. All the other LEGO pieces included are small accessories that can be added around the layout. 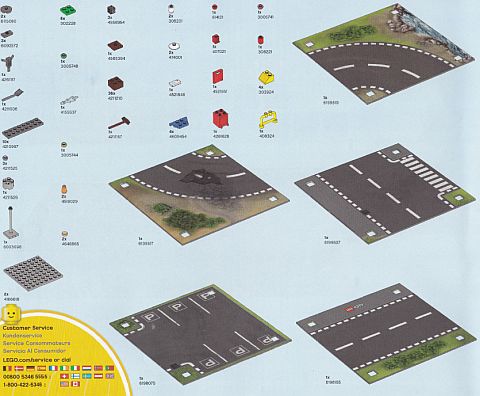 The road and other terrain designs on each of the playmat pieces are nicely printed. The colors used are not exactly the same as LEGO’s plastic pieces, but instead are meant to be more realistic. They do blend with LEGO elements nicely though. The #853656 LEGO City Playmat includes some straight road prints, curved road prints, off-road prints, and a parking lot. There is also a bit of grass, water, rocks, sand and even a little printed wooden bridge! The #853671 LEGO Friends Heartlake City Playmat is similar, with road sections, a grassy area, lake, beach, bridge, parking lot, etc. In the video review below, JANGBRiCKS will show you the #853656 LEGO City Playmat in more detail.

As you can see, these are high quality playmats that are plenty sturdy for kids to play on, and sophisticated enough to use as platforms for the dioramas of adult LEGO fans. While I like these playmats very much, there are a few minor cons that I should point out. The laminated surfaces are great quality, but they do show off oily fingerprints. You can wipe them off, but it is best not to handle them with oily hands. Another issue is that while both playmats that were released so far in this style are generic enough, the paved road section is darker in the LEGO City Playmat compared to the lighter road in the LEGO Friends Playmat. So, even though they are generic, they may not work so well with each other. If you would like to have a larger surface, I would suggest getting two of the same playmat designs, instead of one of each. I got two of the LEGO City Playmats and I’m very happy with them. 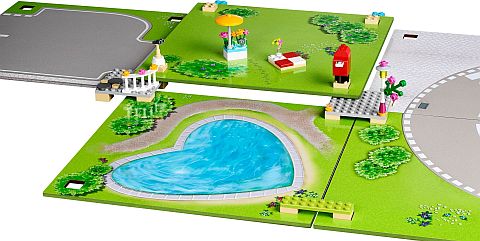 The last somewhat negative feature I can point out is not about the playmats, but about the boxes they come in. LEGO introduced a new box design in some of the newer sets, with an angled corner at one end (not the same but similar to the older LEGO Friends sets). I’m not sure what was the idea behind this shaping, but it makes the boxes much easier to crush accidentally as you stack them or handle them. Most LEGO fans will throw away boxes, especially for supplemental sets like this, but if keeping boxes in pristine condition is your thing, don’t grab these boxes from the slanted side. They easily bend and get creases. 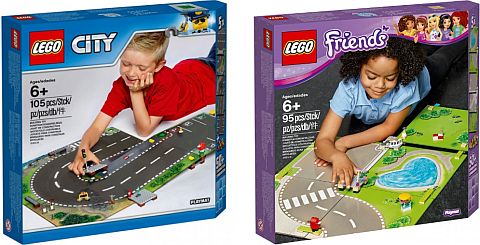 Both the #853656 LEGO City Playmat and the #853671 LEGO Friends Heartlake City Playmat are $24.99 each, which means each of the playmat pieces are $5, which is $2.5 cheaper than a standard roadplate, or $3 cheaper than a plain 32×32 baseplate (when buying them directly from LEGO). I think they are a good value, especially since they are double sided with two different designs, and much more colorful and detailed than a standard baseplate or roadplate. I’m not sure how widely available these playmats are, as they are quite a unique item, but if you are interested, you can get them directly from the Brick Accessories section of the Online LEGO Shop. 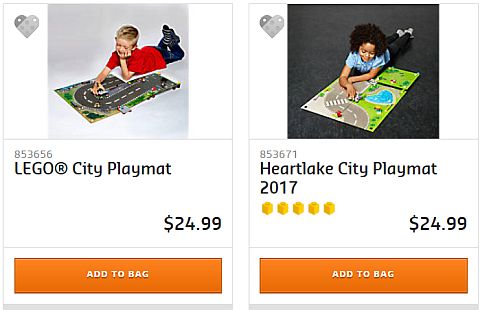 What do you think? How do you like these LEGO playmats? Do you own any of them already? Or do you have other LEGO playmats either directly from LEGO or from third parties that you really like? Feel free to share your thoughts and own review in the comment section below! 😉