As we discussed at the beginning of the month (see: April 2018 – New LEGO Sets & Promotions), currently you can get the exclusive #5005358 LEGO Minifigure Factory with purchases of $75 or more. This offer was scheduled to run April 1-15 according to the April LEGO Store Calendar, however it seems that LEGO extended it until the 20th, based on the information posted on their website. 🙂 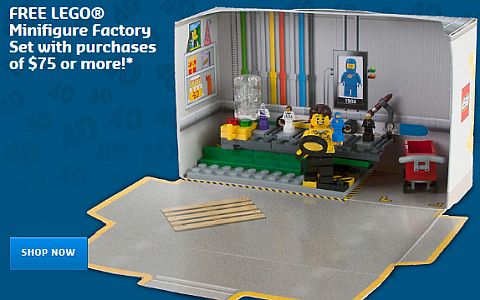 We already briefly talked about the #5005358 LEGO Minifigure Factory, however since it is even more awesome than originally anticipated, I thought to discuss it in a bit more detail. The set is packaged in a sturdy cardboard box that is printed on both the inside and the outside. It basically represents the walls of a LEGO factory, and serves as the stage for the brick-built scene inside. 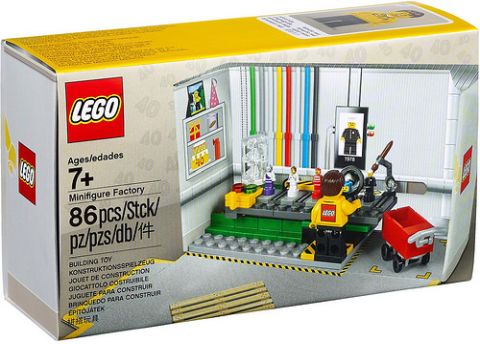 The box is a simple rectangle with a flip-down lid, which extends the floor-space. The back wall has a couple of cutouts, which will serve as part of the action-feature of the set. It is interesting to note that the 6×12 plate is glued inside the box to create a solid base for the brick-built scene. Although LEGO rarely glue things, once everything is built, it becomes clear why LEGO choose to secure this plate; for the action feature to work, the brick-built scene needs to solidly stay in place. 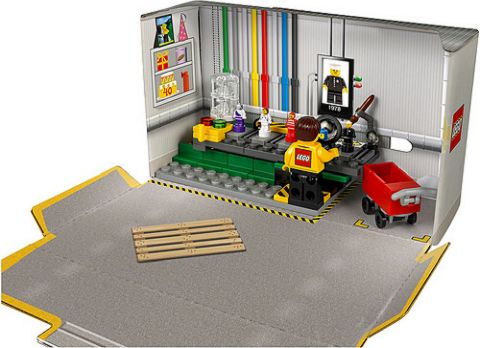 From the included pieces, you will build a small conveyor belt with room for five nano-figures; a 1978 classic policeman, a 1984 classic spaceman, a 1989 classic pirate, a mini version of the LEGO Collectible Minifigures Series 1 Nurse from 2010, and a mini version of Pixal from the 2014 LEGO Ninjago collection. Keep in mind that while these nano-figs might look big on your screen, they are actually very tiny, standing on just one stud, and barely waist high compared to a regular minifigure.

Amongst the five nano-figures Pixal is the most complex; she is the only one with different color torso and legs, has the most metallic paint, and her torso and facial print is very intricate. It’s not to say that the other nano-figures are any less awesome, but she definitely stands out as unique. And, of course, the classic spaceman is going to be a favorite of many LEGO fans.

In addition to the nano-figures, there is also a regular size minifig in the garb of a LEGO employee. LEGO employee minifigures are also highly collectible, so he is going to be a fan-favorite as well. He comes with a magnifying glass, so he can carefully inspect all the nano-figures coming down the conveyor belt.

The action-feature of the set is that the conveyor belt can, in fact, move. This is simply achieved by pushing the belt from left to right, and as you do this, the image on the cardboard insert on the back wall changes to show a large picture of the nano-figure that is currently being inspected. Watch the video-review by JANGBRiCKS below to see how this works.

I have to say that this set is probably one of the best freebies we have gotten from LEGO in a long time, or maybe ever (depending on your own personal favorites). The five nano-figures and the minifigure are highly collectible, there are a number of other useful printed elements, and while the box is made of cardboard, it works perfectly as the background for this little factory, and the play-feature is incorporated very cleverly. 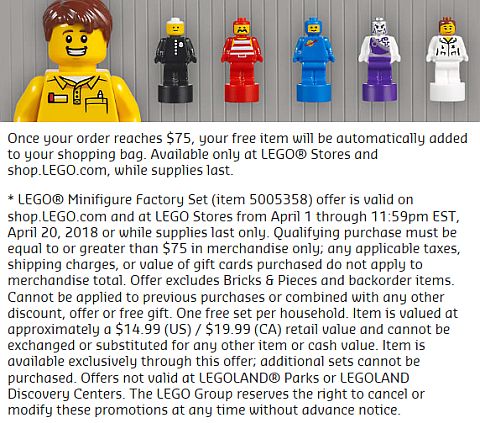 As I mentioned at the beginning, the #5005358 LEGO Minifigure Factory is currently available with purchases of $75 or more. While the offer was originally scheduled to This run April 1-15, according to the information posted at the Online LEGO Shop, it seems that it was extended until the 20th. In either case, this is a freebie worth to get, so if you would like to get one, make sure you don’t miss the deadline. There are plenty of awesome new LEGO sets to choose from to qualify for the free set at both official LEGO stores and the Online LEGO Shop.

What do you think? How do you like the LEGO Minifigure Factory set? Are you planning to place an order to get it? Or do you have it already? Feel free to share your thoughts and own review in the comment section below! 😉