Some of the most interesting sets that became available this month are from the arctic sub-theme of LEGO City. Although it’s a little strange that LEGO chose to release this collection at the beginning of summer, the sets are definitely worth checking out. So, let’s take a closer look at the new LEGO City Arctic sets! 🙂

The 2018 LEGO City Arctic collection includes seven sets, ranging from small to medium to large. Prices are between $7 and $120, which makes the whole range quite affordable, even if you would like multiple sets. The color-scheme is almost identical to the 2014 LEGO City Arctic collection, so if you own any of the earlier sets you can easily mix and match them. While in 2014 our arctic explorers were looking for rare crystals, this time they are discovering prehistoric mammals trapped in ice. The vehicles are also similar to the earlier collection, including snowmobiles, arctic trucks, planes, and helicopters, plus a mobile base. 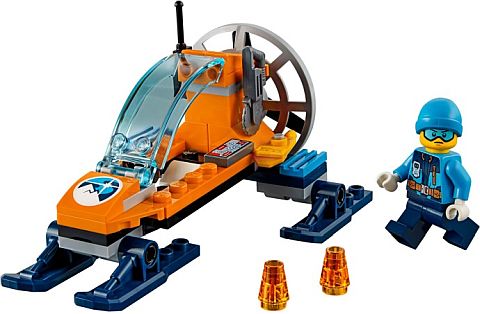 The smallest of the sets is the #60190 LEGO City Arctic Ice Glider, which includes a small vehicle on skis, and introduces the newly designed minifigs. There is not much to see here, so if you are planning to get any of the larger sets, you can easily skip this one. Here is the official description: Discover incredible things with the #60190 LEGO City Arctic Ice Glider set, featuring an ice glider with opening cockpit and spinning fan rotor, plus 2 remote tracker beacons, a decorated computer pad, radio, saw and a pair of snowshoes. Includes an arctic explorer minifigure. 50 pieces. Price: $6.99 – BUY HERE 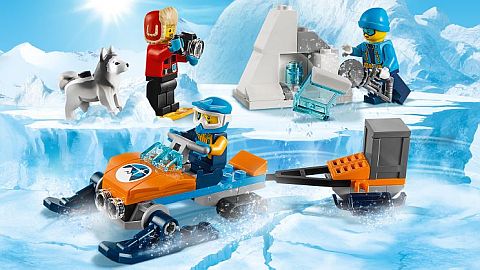 The #60191 LEGO City Arctic Exploration Team set is only a couple of dollars more than the previous one, but there is so much more included here! You get a small vehicle like in the previous set, but also a husky, and three minifigures with one sporting the new super cute arctic hat with earflaps in red! You also get a 1×1 round trans-light-blue round brick with an insect print – our first hint to the mission of the arctic explorer team. This is a good team-builder pack for arctic exploration. Here is the official description: Discover incredible things with the #60191 LEGO City Arctic Exploration Team set! This LEGO City Arctic Expedition set features a snowmobile with trailer hitch, trailer and storage box, plus an ice block element holding an insect encased in ice, saw, camera and a pair of snowshoes. Includes 3 arctic explorer minifigures and a husky dog. 70 pieces. Price: $9.99 – BUY HERE 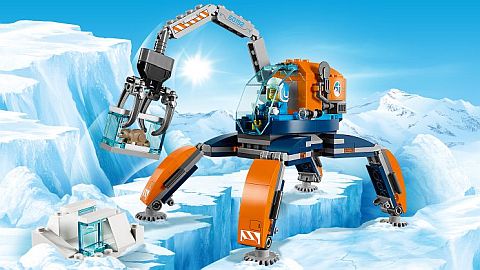 An arctic mech is basically what we have in the #60192 LEGO City Arctic Ice Crawler. A handsome machine that would work well not just in the arctic, but also in industrial and futuristic settings. We only get one minifigure here, but he sports the new hat with earflaps – this time in blue. And, we also finally get our first real ice-trapped animal! If you don’t care for the vehicle, you could potentially skip this set. Here is the official description: Recover incredible things with the #60192 LEGO City Arctic Ice Crawler, featuring an opening minifigure cockpit, posable legs and an articulated arm with opening claw gripper, plus an ice block with removable translucent-blue section and rodent figure, a mug and a saw. Includes an arctic explorer minifigure and a rodent. 200 pieces. Price: $24.99 – BUY HERE 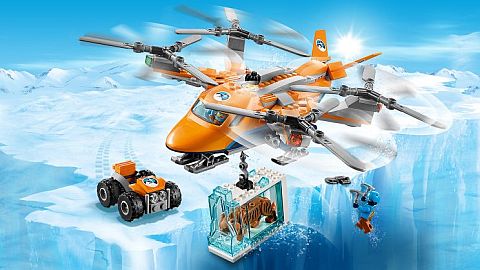 In the #60193 LEGO City Arctic Air Transport we get a very cool helicopter. Check out the video-review below to see how the four spinning rotors and other features work. We also get a small buggy, two minifigs, and a super awesome saber-toothed tiger trapped in ice! Here is the official description: Carry precious items with the #60193 LEGO City Arctic Air Transport, featuring a heavy-duty quadrocopter with 4 spinning rotors, ski landing gear, opening minifigure cockpit and a functioning winch with rope and hook. This fun arctic expedition set also includes an ATV with 2 pickaxes, saw, translucent-blue ice block with hook latch, opening side, and ‘frozen’ saber-toothed tiger, plus 2 arctic explorer minifigures. Quadrocopter measures over 3” (8cm) high, 9” (25cm) long and 11” (30cm) wide. 277 pieces. Price: $39.99 – BUY HERE 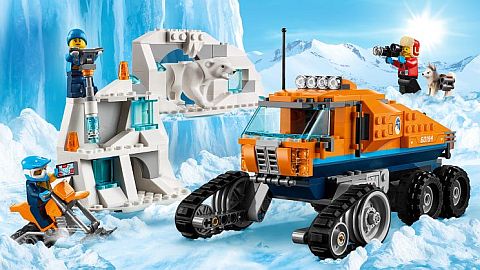 The #60194 LEGO City Arctic Scout Truck is similar to the previous set, with a small vehicle, a large vehicle (instead of the helicopter we get a truck), and a large animal trapped in ice. However, this set also has a very unique feature as it can be combined with the #17101 LEGO BOOST Creative Toolbox to bring it to life. Once you combine the sets and download the free LEGO BOOST app, you can code the truck to control the forklift, examine samples with the color sensor, help a whale back into the water, and much more. This is the first set that uses the LEGO BOOST system outside of the LEGO BOOST Creative Toolbox, so it’s a pretty big deal. Here is the official description: Explore the harsh terrain with the #60194 LEGO City Arctic Scout Truck, with front tracks and 4 all-terrain wheels, antenna, lights, onboard analysis station, space for other equipment, and a loading bay for the snow bike with moving track. This fun set also includes an ice wall/arch with translucent blocks and sonar beacons, coring tool, plus an ice cave with translucent blocks and room for the polar bear figure. Includes 3 arctic explorer minifigures and a husky dog. Arctic Scout Truck measures over 3” (10cm) high, 7” (20cm) long and 3” (11cm) wide. 322 pieces. Price: $59.99 – BUY HERE 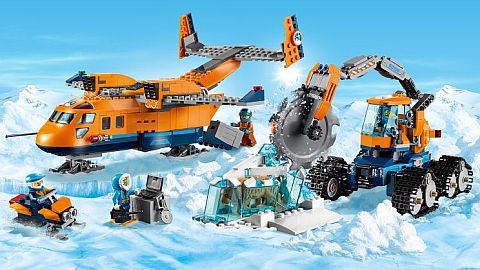 The #60196 LEGO City Arctic Supply Plane is a limited-release set that’s not available in all countries and at all LEGO retailers. It includes a plane, a specialized ice-cutting vehicle, a buggy, a saber-toothed tiger trapped in ice, and four minifigures. It’s a solid set with a lot of play-features, and is a good option if you don’t want to spend the money on the largest of the sets. Here is the official description: Airlift amazing finds with the #60196 LEGO City Arctic Supply Plane, featuring an opening back and ski landing gear, plus an ice cutter vehicle with rotating cab, articulated saw arm and spinning blade, an ice scooter and a ‘frozen’ saber-toothed tiger encased in an ice formation with translucent blue bricks. Includes 4 arctic explorer minifigures, and a saber-toothed tiger. Cargo plane measures over 3” (10cm) high, 11” (30cm) long and 10” (27cm) wide. Ice cutter measures over 4” (12cm) high, 9” (25cm) long and 4” (11cm) wide. 707 pieces. Price: $79.99 – BUY HERE 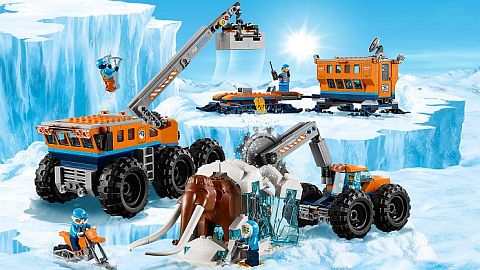 As you can see, the LEGO City Arctic collection includes some very solid sets, and there is something for everyone’s budget. If you just want a small sample, the #60191 LEGO City Arctic Exploration Team is a particularly good choice. There are several options for mid-range sets, and it just depends which combination of vehicles, minifigs, and animals you like the most. And, of course, there is the largest set, if you want to set up a whole arctic exploration base, or you can even combine the smaller sets for a larger display. You can find all the LEGO City Arctic sets at the LEGO City section of the Online LEGO Shop. 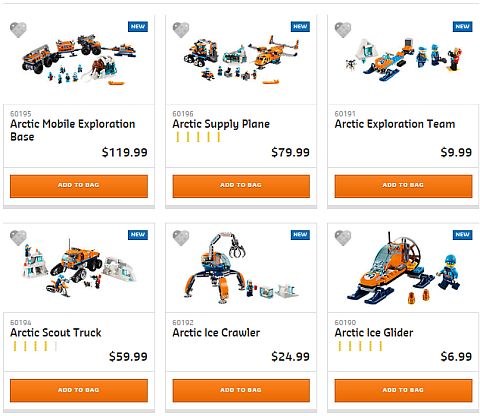