There are two new LEGO trains for 2018; the #60197 LEGO City Passenger Train, and the #60198 LEGO City Cargo Train. While the trains are already available in Europe and the UK, they won’t be released until August in North America. LEGO has been releasing new cargo and passenger trains every few years, and the new trains look fairly similar, however they have one big change; an completely updated LEGO Power Functions system. So, even if the trains are not available in your country yet, I thought it would be a good idea to discuss them early and see how they work. 🙂 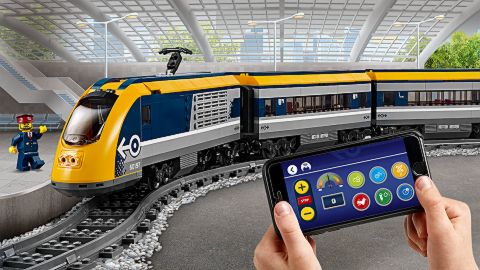 Please note that the updated LEGO Power Functions system is very new, so we don’t yet know all functions and components that LEGO is planning to include. There is extensive discussion at the LEGO Ambassador Forum about the new system, and a long list of questions and concerns have been submitted to the LEGO Power Functions development team from LEGO fan communities. It will probably take a while until we hear back with answers, but when we do, I will definitely share them. In the meantime, we can check out the two trains, thanks to JANGBRiCKS, who reviewed them recently. So, let’s take a look. 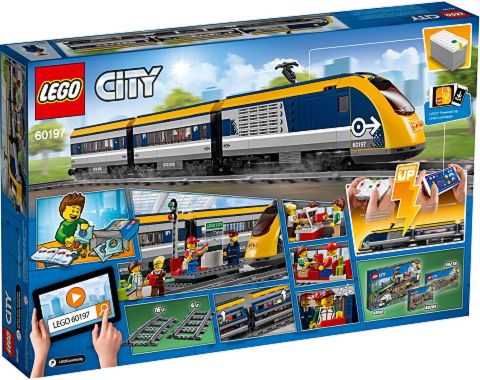 The #60197 LEGO City Passenger Train is a sleek dark-blue and yellow beauty styled after European high-speed trains. It is the third passenger train released since 2010, after the #7938 LEGO City Passenger Train from 2010 (red train), and the #60051 LEGO City High-Speed Passenger Train from 2014 (white train). The new train comes with a motorized engine with 10-speed Bluetooth remote control (also features opening nose cone and driver’s cabin), 2 cars with removable roofs (one is a cafe car, the other is a passenger car), a generous full circular track with 16 curved and 4 straight rails, plus a small train platform, train signal, and 4 minifigs. The passenger train with cars measures over 4” (11cm) high, 27” (69cm) long and 1” (5cm) wide. 677 pieces. Price: $159.99 – SEE AT THE ONLINE LEGO SHOP

As you will notice, the new train is controlled via Bluetooth connection instead of infrared like the older trains. This provides a more reliable connection in most circumstances. In addition, rather than having a separate receiver, the receiver is now integrated into the battery box. This is quite a space saver, as the battery box remains the same size. To make sure that kids don’t try to connect the new system with the old (they are not compatible), the plugs are now different as well. Other than this, the components are quite similar to the old system; there is a motor (looks the same as the old motor but with different plug), a battery box similar to the old one, and a redesigned remote control. In the video-review below, JANG will show you the components of the train, as well as how the new LEGO Power Functions system works. 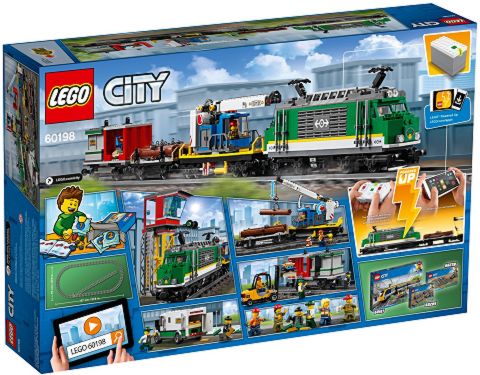 The #60198 LEGO City Cargo Train is fantastic in this regard. The set features a motorized engine with 10-speed Bluetooth remote control, a crane wagon with rotating and extendable boom arm, container wagon with 2 containers, and a log wagon. In addition, you also get an armored truck, a forklift, a control center, two pallets with money and gold bar pieces and a snow scooter, and 6 minifigs. The set also includes a full circular track with 16 curved rails, 16 straight rails and a railroad switch with lever. And, of course, you also get all the updated LEGO Power Functions elements; the motor, the battery box, and the remote control. This is like the ultimate LEGO train setup all in one box! However, this also means a higher price. The cargo train in total measures over 4” (11cm) high, 32” (82cm) long and 2” (6cm) wide. 1226 pieces. Price: $229.99 – SEE AT THE ONLINE LEGO SHOP

Another feature of the new LEGO Power Functions system is that besides using the remote control, it can also be controlled by your smartphone or tablet via Bluetooth connection. All you need to do is download the LEGO Powered Up App from the App Store or Google Play, and follow the directions. Besides making the train move and stop, the Powered Up App has extra features that can make the train even more fun to play with, such as train sounds and the ability to see how fast the train is traveling from -10 to +10 increments. You can read more about the LEGO Powered Up App, including some very helpful FAQ at the official LEGO Powered Up page.

LEGO should be releasing more information about the new Power Functions system in the upcoming months, as the components are added to more sets (like the #76112 LEGO DC Super Heroes App-Controlled Batmobile, also coming in August). It will also be interesting to see what else we will be able to do with the Powered Up App besides speed, direction, and sounds. There is also a good review by Sariel comparing the components and capabilities of the new Power Functions system to the old one, which I have included below.

If you never owned any LEGO trains, either of the 2018 LEGO City trains are a good way to get into the hobby. They include everything you need; train, LEGO Power Functions elements to make the train motorized, and a full circle of tracks. If you just want to try out the new LEGO Power Functions system (and also get a basic train with tracks), the #60197 LEGO City Passenger Train is great value for your money. I’m sure LEGO will also sell the new LEGO Power Functions components separately, but that may not be until next year. Also, I should mention that while the new trains are fully compatible with previously released tracks, there are also at least two new track packs coming; the #60205 LEGO Train Tracks and Curves, and the #60238 LEGO Train Switch Tracks.

In summary, both of these trains are excellent introductions to LEGO trains, or additions to an already existing LEGO train collection. While the trains themselves are similar to previous releases, the fact that these are the first sets with the new LEGO Power Functions system makes them extra special. If you are in Europe or the UK, you can already purchase the trains, and if you are in North America, you will need to wait until August to get them. They are listed at the LEGO City section of the Online LEGO Shop. 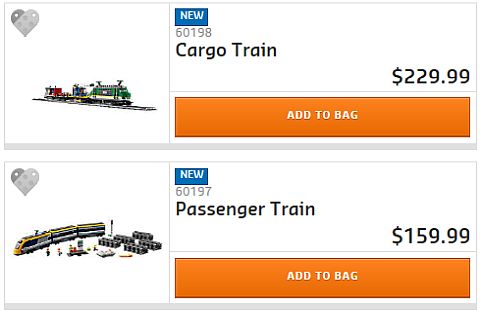 What do you think? How do you like the 2018 LEGO City train sets? Are you planning to get either of them? Or both? And what do you think of the LEGO Power Functions upgrade? Do you have any questions or concerns about it? Feel free to share and discuss in the comment section below! 😉