There are several January 2020 LEGO sets that come in some type of plastic encasing. This includes the five LEGO Friends Play Cubes, the four LEGO Disney Storybook Adventures, and the three LEGO Ninjago Arcade Pods. I’m very fond of small LEGO sets in durable plastic boxes, so as soon I can get my hands on them, I plan to review them all. Today, we will start with the LEGO Friends Play Cubes, as LEGO was kind enough to send us some samples. Let’s take a look.

The LEGO Friends Play Cubes come in a sturdy cardboard casing, with the translucent-glittery-purple side of the cube peaking out. As you will notice in the upper right corner of the packaging, this is Series #1 of the LEGO Friends Play Cubes, so we can expect to see more in the future. Also on the front of the box, it mentions that there is a surprise pet inside each of the sets as well as some stickers. You can see some of the possible pets at the edges of the box; birds, puppies, kitties, bunnies, and hamsters in unusual colors like dark-azure, hot-pink, light-purple, and gold. I would have preferred pets in more realistic colors, but they could still be used for a toy store in your LEGO city or something similar. 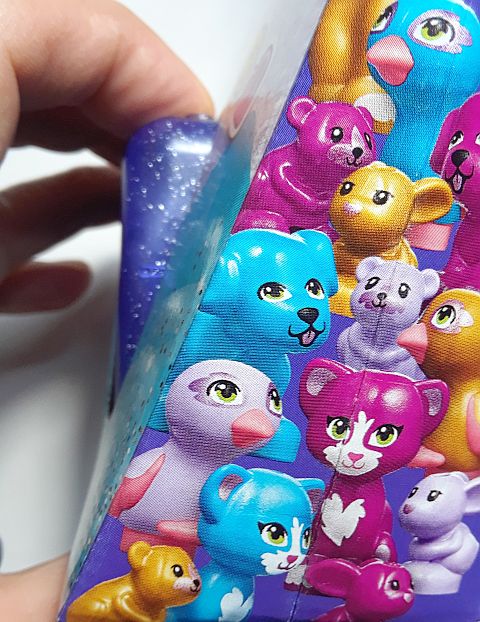 The play cube itself is somewhat larger than the previously released round pods. And they have different attachment points. Inside the pods, there is a 6×6 round plate glued in on one side for small dioramas, and there is a 1×2 plate on the other side to hold a minifig. There are no attachment points on the outside. The pods provided a nice way to carry a small number of pieces, or arrange a small scene, but other than that, they didn’t have much use. 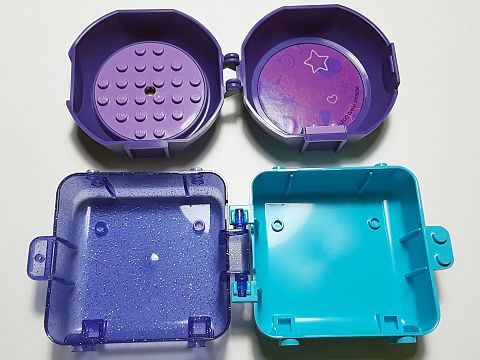 The play cubes are a lot more versatile, and could be incorporated in the LEGO building system in a number of ways. They have 8 tubes at the bottom so you can attach them upright on top of studs (the distance is 6 studs), and they have eight open studs on top with even more possibilities. The cubes close by two standard studs. And inside the cubes, there are 4 rectangular tubes for receiving studs, and 4 open studs. All these attachment points make the cubes useful as building pieces, and due to the larger space and secure closure, they could also be used as storage/carry containers for special pieces. 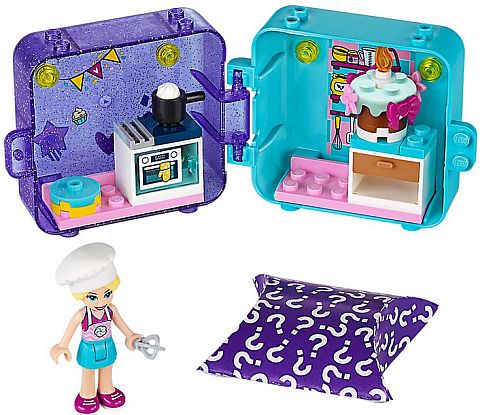 The one thing I don’t like about the cubes is that the hinge feels flimsy compared to the hinge of the pods. I was never worried about the pods breaking as the plastic, the hinge, and the closure are very sturdy. However, it seems to me that there is a chance the cubes could crack near the hinge. Time will tell. 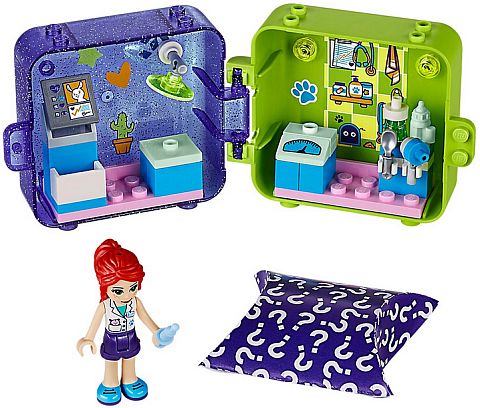 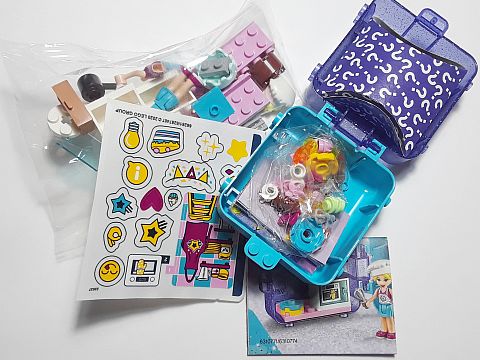 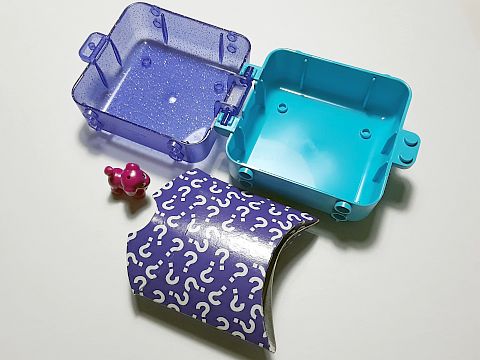 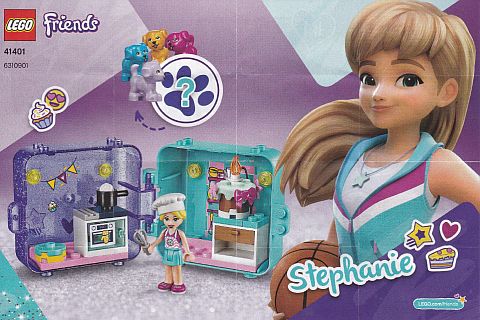 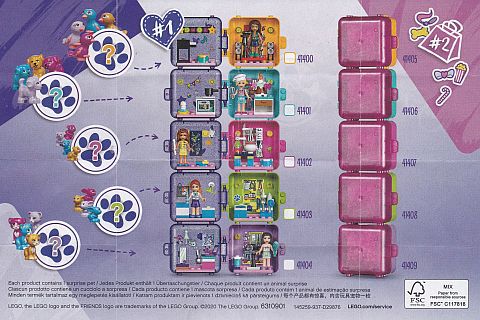 Once you fold out the instructions page, you will find an image of the particular cube you’re about to build, and images of some of the other 2020 LEGO Friends sets. The other side of the instructions page shows how to build the little scene you can put inside the two halves of the cube. 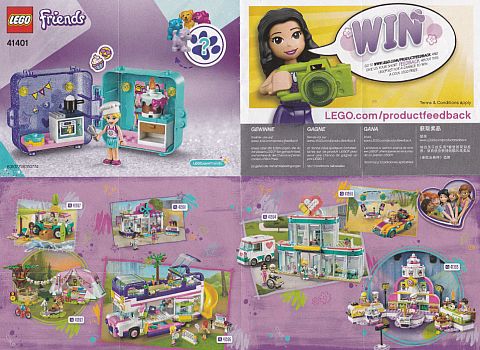 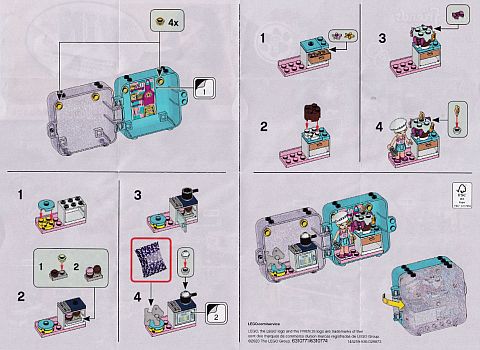 The most unusual pieces in the set are the two 2×6 brackets. They form the base for the two little scenes, and the studs on the side allow you to attach them to the back of the cubes. Each of the cubes comes with two of these pieces in different colors. Other pieces include lots of decorative elements and accessories, based on the favorite activities of each of the friends; music for Andrea, cooking for Stephanie, scientific instruments for Olivia, vet accessories for Mia, and photography equipment for Emma. Even after you build each scene as shown in the instructions, you will have plenty of extra pieces left. In addition, you can further decorate each cube with the included stickers. 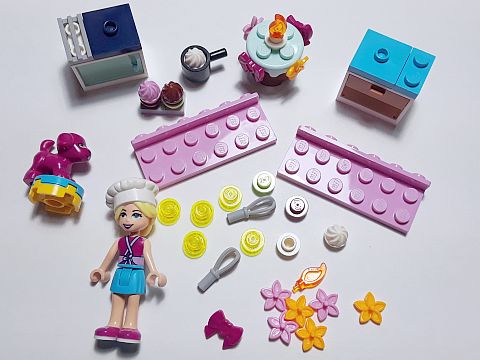 It looks like LEGO is going to give us lots of little pods, cubes, and magic books this year. I personally like them as they are made of ABS plastic, and they can be incorporated into a LEGO build, or used for storage and as a carry case. The LEGO Friends Play Cubes area a great way to get extra characters and tons of accessories, and the cube is reusable as well. 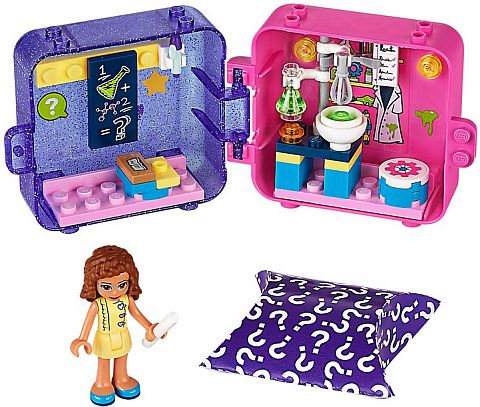 Also notice something very cool; as demonstrated on the LEGO Friends Play Cube packages and inserts, the cubes can be attached to each other and stacked up in various configurations to make a minifig display wall. You could keep the cubes in a permanently open position, and use each half for displaying minifigs or even a small diorama. Or, you could attach just the back of the cubes to a frame and keep the doors open-able. 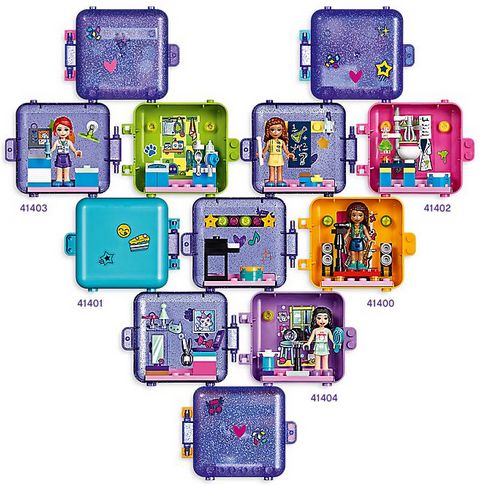 Another possibility I thought of is attaching the cubes to each other while lying down, and using them for parts storage. The clutch-power of the studs is strong, so the cubes won’t fall apart. 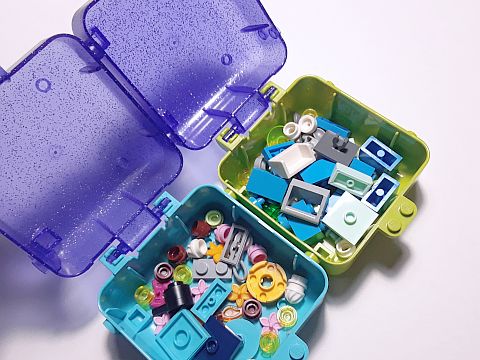 On the negative side, I’m a bit concerned about the durability of the cube’s hinge, and I would have preferred pets in “normal” colors. Also, compared to the previously released pods with their awesome holographic images at the front, the cubes are pretty plain looking from the outside. Probably this is why LEGO made the cover translucent and glittery, but it’s not as cool as the pods. All in all, I like the cubes, and will probably collect them all. 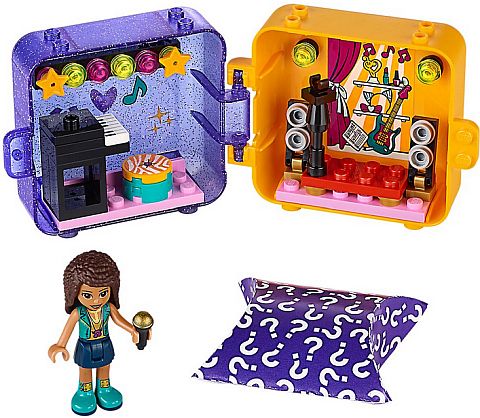 If you are interested, all five of the Series #1 LEGO Friends Play Cubes are available from January 1st, at the LEGO Friends section of the Online LEGO Shop. 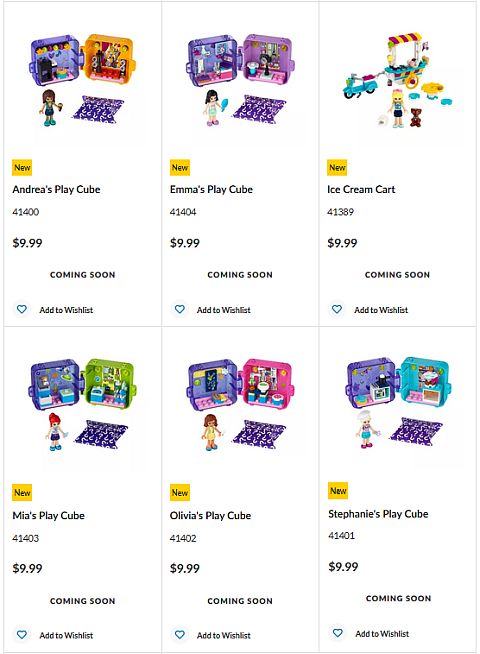 What do you think? How do you like the LEGO Friends Play Cubes? Are you planning to get any of them? Or even collect them all? And what do you think about the possibility of using them for display or storage? Feel free to share your thoughts and discuss in the comment section below!