Yo-ho! A pirate set! When I first heard about the #21322 LEGO Ideas Pirates of Barracuda Bay, I was stoked! We finally get to see what happened to the crew of the Black Seas Barracuda. Personality oozes from every side of this set. And to make it even better, it’s a two-in-one set with an awesome pirate island as well as a beloved pirate ship! 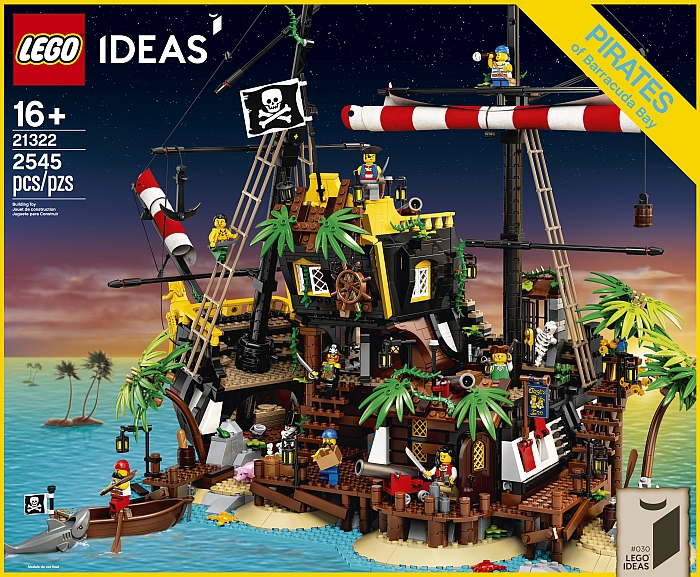 When building this set you get a sense of nostalgia due to the hybrid construction. And by hybrid I don’t just mean combining the island and the ship, but how LEGO designers combined the thick chunky parts and basic colors of the past (i.e. using yellow instead of gold for the ship), and modern elements and techniques. The result is a ship that looks classic but with plenty of modern details. 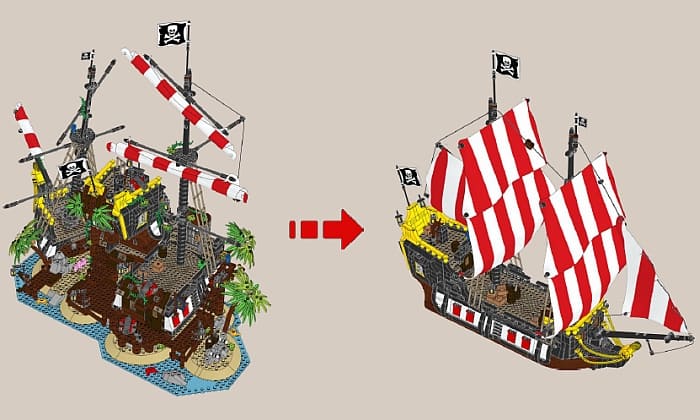 From bow to stern and all the wrecked parts in between, this set is a love letter to LEGO Pirates of old. As such, the building techniques don’t try to do anything too fancy. What is novel though, is how this set masters the art of presentation. Those are the techniques I would like to focus on. But before we do that I will share more of my general thoughts on the two versions of the set (pirate island and ship), then we will discuss the techniques. So, climb aboard and set sail, and wreck this ship on some building knowledge!

There are a number of examples of horizontal modularity in LEGO sets. The LEGO Creator Expert Modular Buildings, for example, feature connection points at their bases that can lock them together and form a unified street. Another example is that any time you build a LEGO train, each section of that vehicle is essentially a modular piece that can be connected with the rest. But what happens when you make a large model that needs to move around freely while still remaining modular? This presents some concerns for maintaining stability. 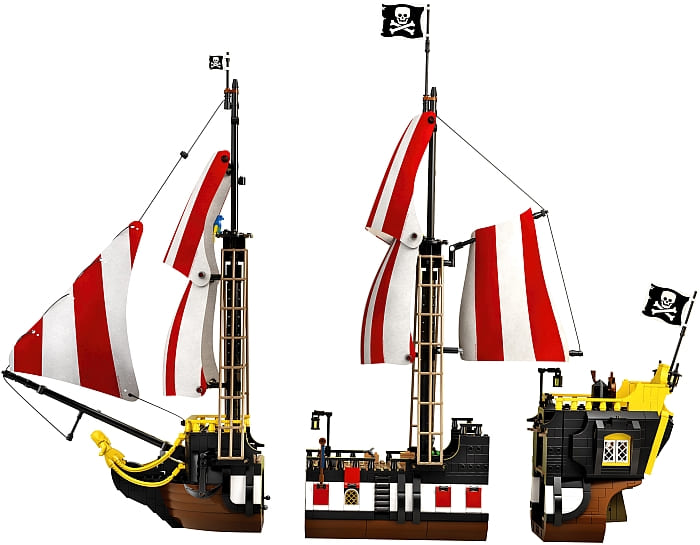 In the case of a train, the model does move, but it is along tracks, which keeps violent shifts to a minimum. The links of the train are also designed to absorb motion, thus protecting the stability of the modules, but not necessarily the entire train.

Buildings merely need a method to hold the position of each section together. If you want to move them, you will probably detach each model from the whole. Again, this modularity protects the individual segments but not the entire whole.

In the #21322 LEGO Ideas Pirates of Barracuda Bay we have chunks of the ship that are modular and can form parts or the island or could be used to assemble the ship. In addition, it’s likely that LEGO fans will want to move the ship around as a whole instead of in parts, so in ship-mode, the modules will need to stay together as one unit. To make all of this to happen, two distinct building techniques were used. 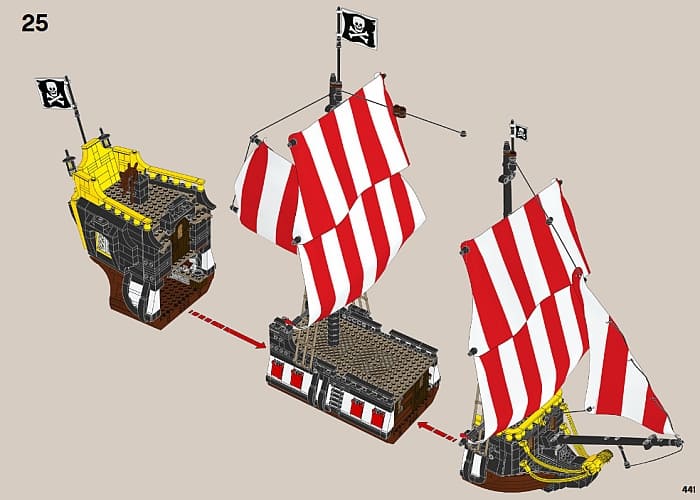 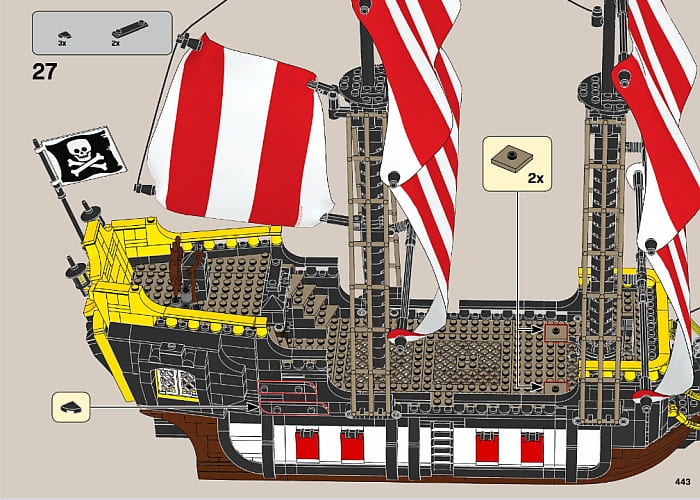 Attaching high and low covers the most area of a model as efficiently as possible. These are also the areas that will have the most amount of stress placed on them if the modules try to separate. If you are using this technique yourself, it may be wise to add a few other points to secure the sections together, based on the mass of your creation.

The second important technique is that the connection points at the top and bottom are different. This is to build in another layer of stability. For instance, let’s say the pins begin to fail because the ship is under a certain type of pressure. Well, if the top were also pins, they’d be under the same pressure and therefore likely to also fail. However, since they are plates using studs, the model would need to be under a very different type of stress to weaken that type of connection.

The end result is that these forms of modularity allow you to create a model that still uses very few connection points, but does not give up much in the way of its structural integrity. That’s not to say it is as strong as a ship that is built as a single piece, rather it addresses some inherent weak points when making something that is horizontally modular.

LEGO MULTI-BUILDING WITH A NARRATIVE

Over the years, we’ve seen countless LEGO sets that feature 2-in-1 and 3-in-1 models. Sometimes this number is even higher. In the traditional LEGO Creator sets with alternate models, the alternates tend to follow the same narrative as the main model; sea creatures, vehicles, robots, buildings, and so on. This approach makes a lot of sense as all models use the same pieces, so you will more likely end up building similar things with them. In general, LEGO fans like these sets, but aren’t really blown away by them because the narrative is weak and predictable. You don’t really need one model to tell a story about the alternates. 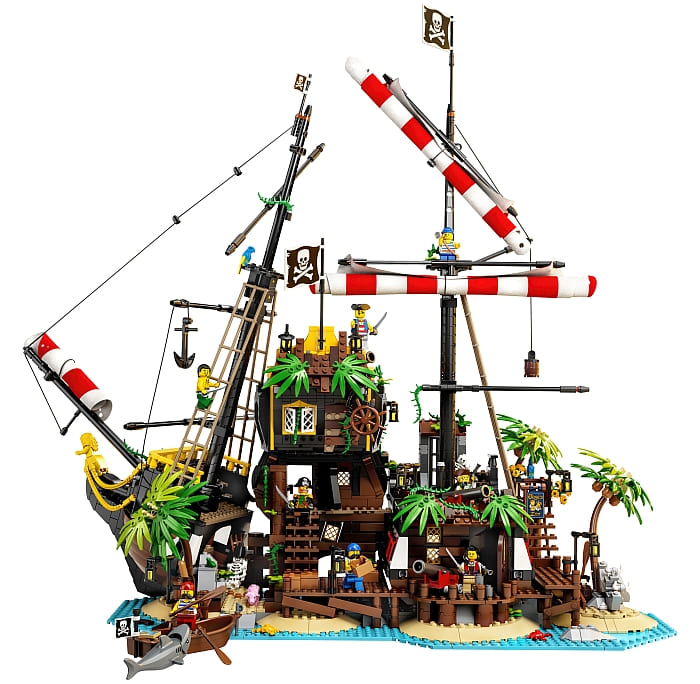 I think the impressive nature of Pirates of Barracuda Bay has to do with how the design handles the narrative. For example, the ship version of the model is in its prime, while the other is the same ship in its wrecked form. This is an extremely enticing narrative. You get two very distinct moments in time that are both fun to explore. Each version of the set informs the builder as to what things are and how they are altered.

And if you really stop and think about it, there’s even a third option for fans. Consider if Red Beard and his crew wanted to leave Barracuda Bay. What would the ship look like if they had to make some haphazard repairs? Fans have the opportunity to not only have fun with this narrative, but they can participate in it with their own version of an overgrown and debilitated ship.

It is rare for me to say that using this technique means you are just a better builder. After all, building is highly subjective. But if your goal is to create something engaging, you will want to consider the narrative of your creation. What is the story that is being told? Can a fan engage with it? If you can answer these questions solidly, then you are a better builder. This is something I struggle to remember to do myself in my own models, yet it is a technique that virtually takes no building skills. So, I highly recommend it as the basis for your own projects.

When you want to build something large, it often helps to create modular sections. There are two purposes for this. One is that you want to be able to move around the model easily, and another is that you want better access to the model’s play features. As you can tell with horizontal modularity, the goal was never to make each section fully secure. Rather it was about determining the bare minimum needed for a stable model. Builders can often lose sight of this, especially when they have a creation with significant structural concerns.

We also discussed how we should attempt to secure a model on its extreme points. In this case, attaching the boat high and low. This is fairly obvious. What’s less obvious is the use of different types of attaching techniques. Consider how you’d need to pull a piece to remove it. If it’s different than the other connection you make, then you’re on the right track.

From a building standpoint, modularity is useful for transporting and accessing your creation as stated above. However, from an artistic side, one can create new options narratively. The thing is, an artistic approach is subjective so it’s a bit hard to define it in absolute terms. It’s better to consider the narrative you create as context for your piece.

Consider works of art. We can point at something and say, that’s a sculpture, that’s a painting, that’s a dance performance, etc. These are forms of art and thus give the piece a sense of context. It’s this context that gives people viewing your piece a way to understand what you have made. So, if you have a strong story in your model, you are essentially providing more context and making it easier for other people to enjoy your creation. This is why I feel it is one of the best skills you can develop as a builder! 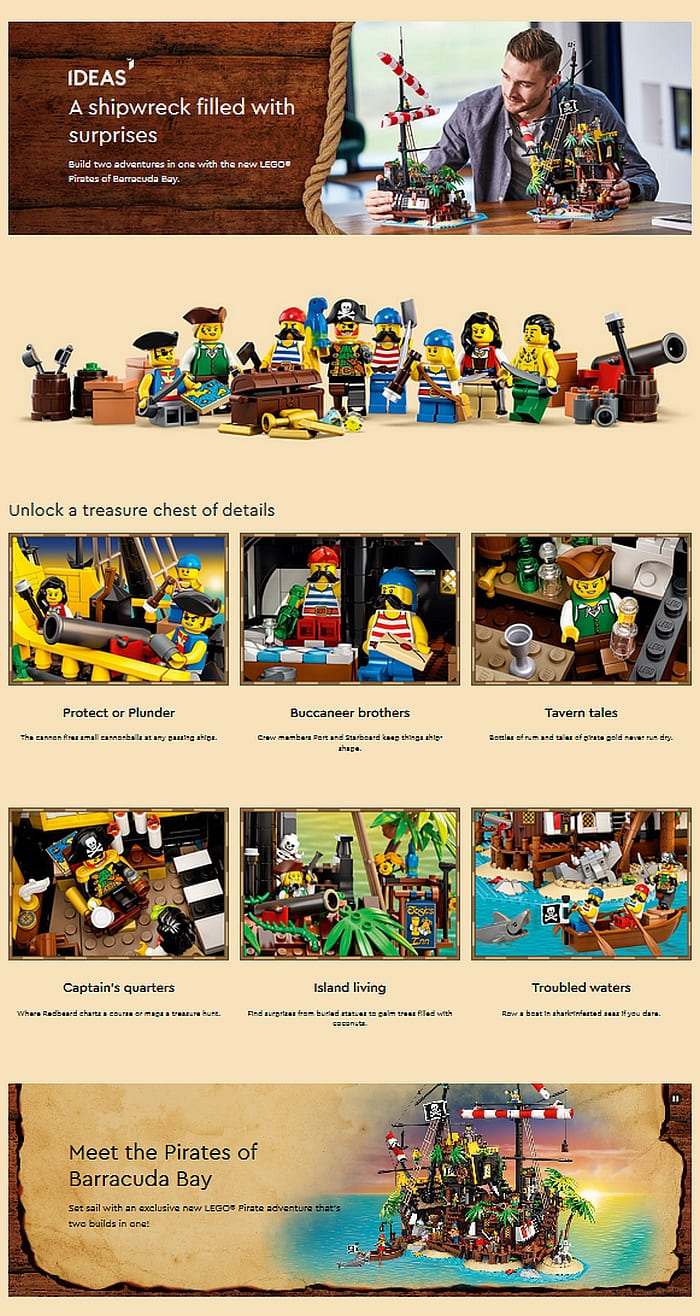 What do you think? How do you like the LEGO Ideas Pirates of Barracuda Bay? Do you have the set already? Have you played out different scenarios with it? And what do you think of the building techniques we discussed here? Are there any other techniques that you really liked in the set? Feel free to share your thoughts and discuss in the comment section below!

Next post: LEGO Masters is Back & Now Casting for Season 2

Previous post: LEGO Contest: Build a Ghost You Are Afraid Of!