The first LEGO VIDIYO sets are going to be available at the beginning of next month, and they are already listed at the LEGO VIDIYO section of the Online LEGO Shop, so we can take a closer look. You might remember from our previous discussions (see links at the end of this post) that LEGO VIDIYO was developed in collaboration between the LEGO Group and Universal Music Group, pulling together physical LEGO elements, music tracks, and augmented reality. Below is the most recent press-release with all the info, along with images of the new sets. 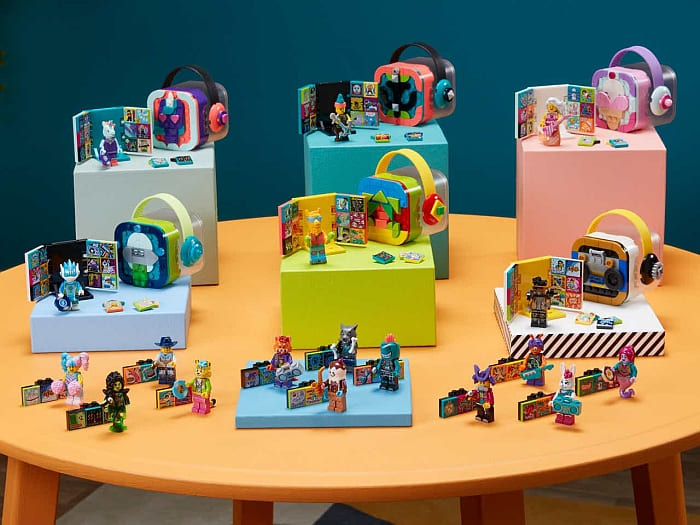 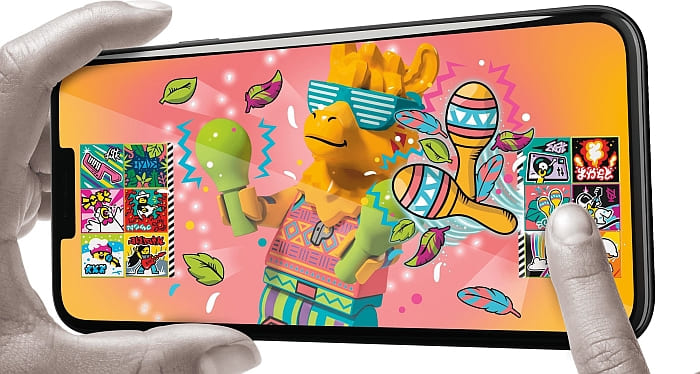 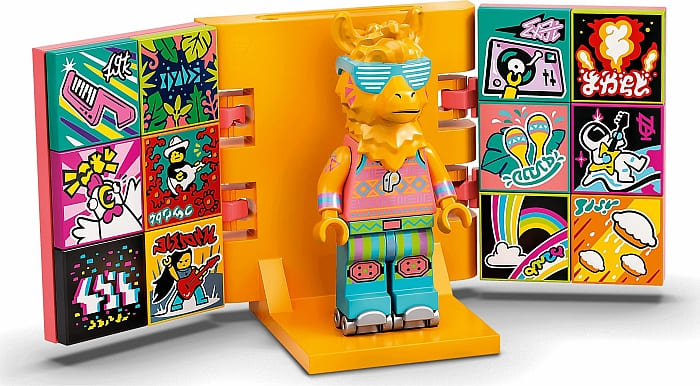 The LEGO VIDIYO world includes an exciting product experience for all music-loving kids, inspired by a wide array of musical genres and musicians. Each product is designed to be played with alongside the free VIDIYO app, giving kids the tools to direct, produce and star in their own music videos.

The first LEGO VIDIYO product drop consists of BeatBoxes, Bandmates, and BeatBits. Fans will discover six unique portable BeatBoxes that each hold a minifigure representing a specific music genre, a scanning-stage, two special BeatBits, and 14 random BeatBits. BeatBoxes can transport up to 16 BeatBits and have a building plate that can be customized with an awesome selection of LEGO tiles to suit the style of its owner. 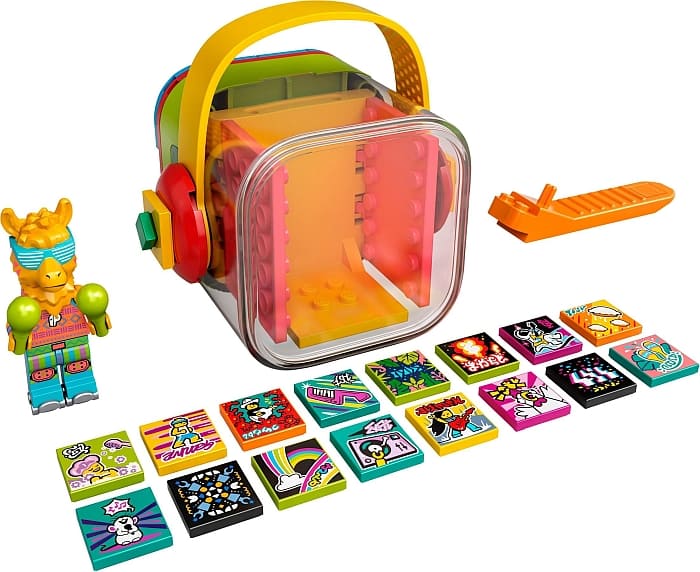 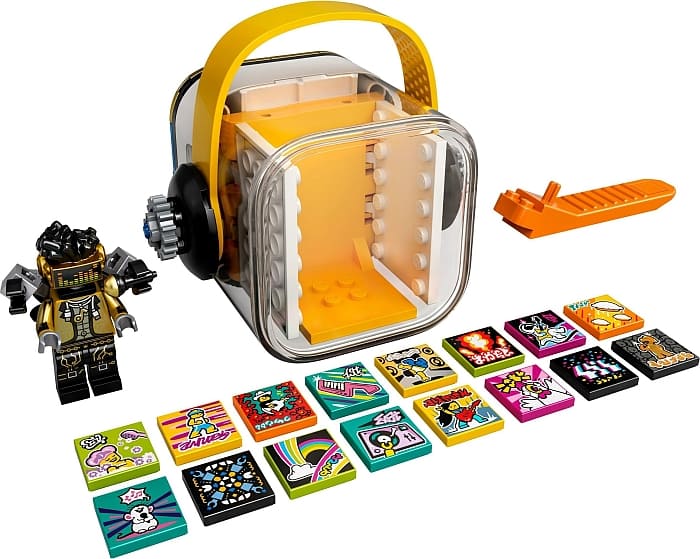 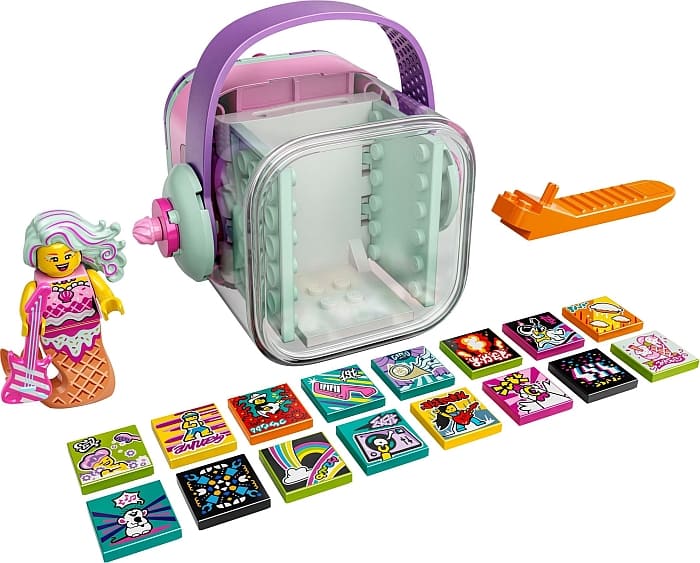 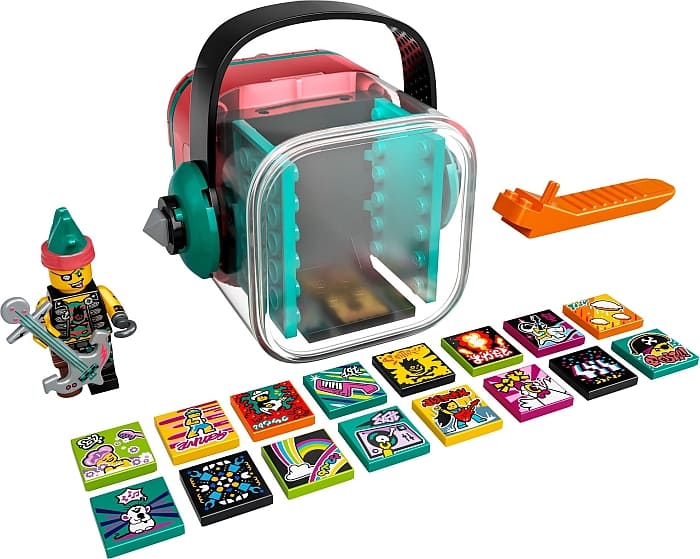 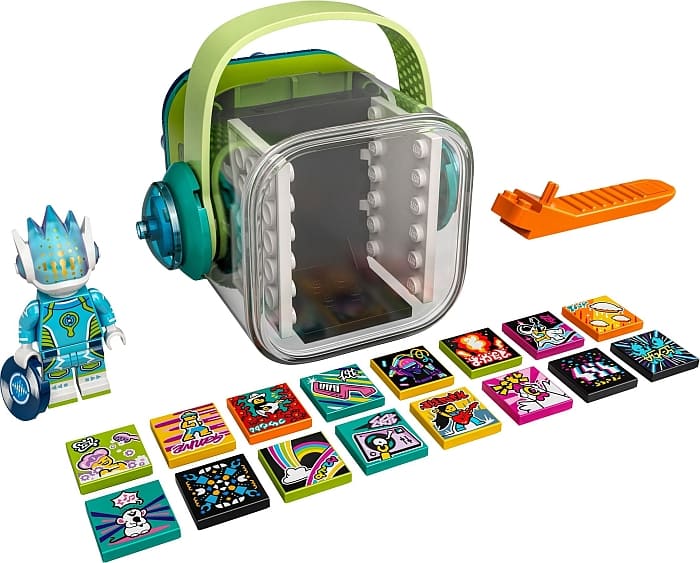 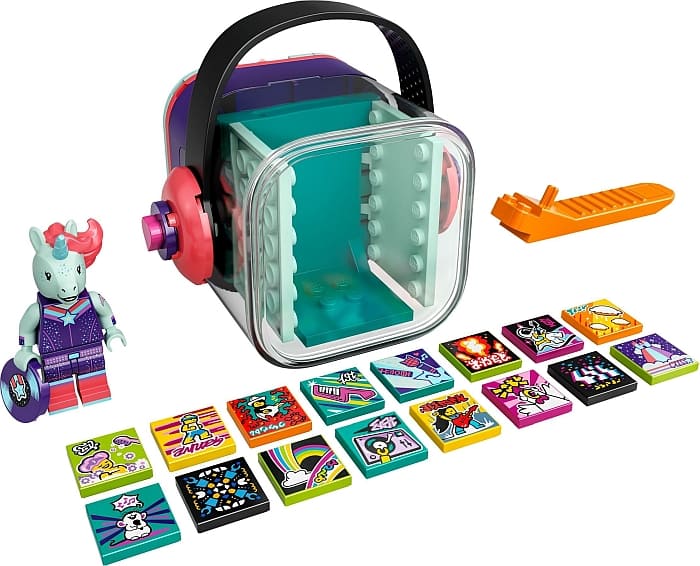 12 Bandmates are also part of this first wave of VIDIYO products, offering a fun range of Mystery-Box collectable music-inspired minifigures. These each come with one special BeatBit and two random BeatBits. BeatBits are a creative and endlessly combinable system of audio-visual effects. They are lovingly printed, like little album covers, on 2×2 tiles representing music effects, character dance moves, and scene props that come to life when scanned by the VIDIYO app. BeatBits, like instruments, are played LIVE during the performance and with 130 BeatBits launching in the first year, there’s always a new VIDIYO hit production to be made! The six BeatBoxes and 12 Bandmate characters introduced in the first wave are as follow: 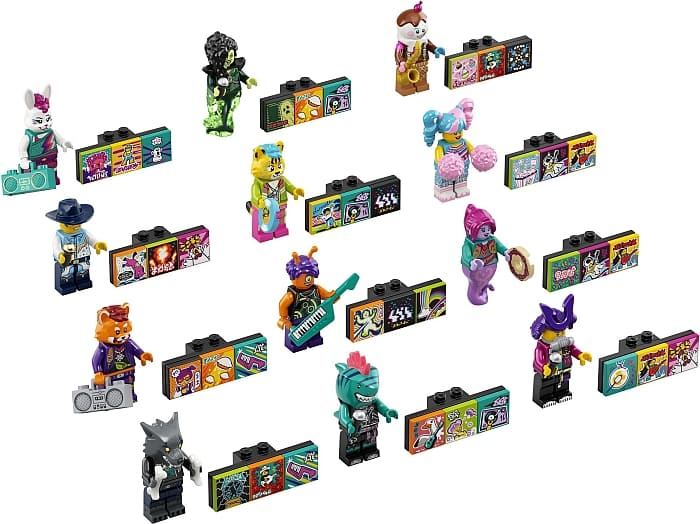 There will be around 30 songs from UMG’s unrivalled global artists, including chart toppers and ultimate classics, all available on the app from launch, with new tracks added frequently. Each song has been programmed to work intuitively with all the BeatBits to ensure they link in harmony, including special music effects that match the beat of the track giving children an incredible level of creative audio customization.

Making a VIDIYO creation is easy – download the app, choose the music, scan the LEGO minifigures and BeatBits and see them brought to life through augmented reality, choosing between three different sizes – Mini (4cm), Medium (1.2m) and Mega (5m) for truly dynamic creations. Finally, record your masterpiece activating the selected BeatBits for an incredible 60-second performance, which can be saved locally in-app to show your friends and family, or trimmed and shared on a fully-moderated, kid-safe social feed!

As part of the VIDIYO app experience children can create their own bands for performances – select clothing, band names, and album covers. By taking part in regularly updated in-app challenges and scanning in products, points are earned which can be used to unlock additional customization options such as costumes, accessories, choreography, and stage layouts. Never before have fans been able to customize LEGO minifigures to such a level of detail, with many of the over 1400 unlockable elements only available through play time and challenge participation.

As if the product reveal wasn’t exciting enough, this partnership sees UMG label, Astralwerks, sign a new artist – a live action, human version of the DJ Llama minifigure from the Tropicon BeatBox. L.L.A.M.A refuses to be attached to any one genre, preferring to be as fluid with his music as he is with his imagination. “Labels are for clothes,” he quips. “No musical style is off-limits for me. I just want to work with people that don’t take life too seriously.” And L.L.A.M.A wants to harness that mischievous free-spiritedness to “inspire curiosity,” as he puts it, in audiences too. 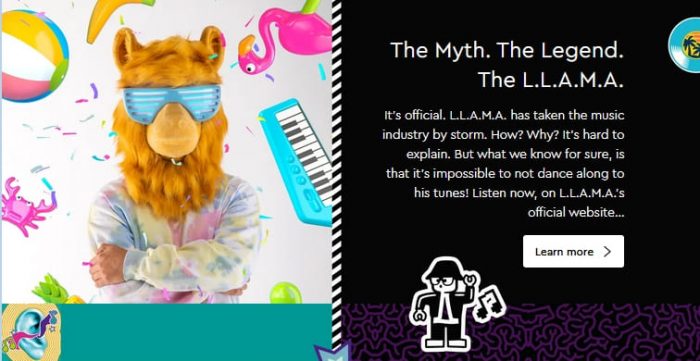 The Los Angeles DJ and producer, newly signed to Astralwerks, approaches both his music and the world with curiosity, playfulness, and joy. VP Marketing, Luke Armitage, Astralwerks comments: “It’s an honor to sign the first ever llama and LEGO minifigure to a global record deal. When L.L.A.M.A first played us the early demo of ‘Shake’, we all knew we wanted to work with him. The LEGO Group’s partnership with UMG completely aligns with our mission to surround the electronic music space with innovation.” Fans can stay tuned to L.L.A.M.A and his crazy plans via his social media channels @musicbyllama.

“Play and music are both universally appealing and have a fundamental impact on the development of children. With LEGO VIDIYO we can now provide a kid-safe space for children to express their playful creativity through music video making to develop these new skills” said William Thorogood, VP and Executive Producer of LEGO VIDIYO, the LEGO Group. “The partnership with UMG brings with it innovation on so many levels, from an exciting new music centered product and app experience to ground-breaking ways of engaging fans with the signing of L.L.A.M.A. LEGO VIDIYO has been tested with over 1,500 families across North America, Europe and Asia and the response we have seen has been incredible, with children and parents all excited to be able to bring LEGO minifigures to life in their very own unique, creative music videos. Now that LEGO VIDIYO is out in the wild, I’m so excited to see what the young creators of today have in store!”

Joshua Burke, VP, Strategic Marketing & Global Partnerships, Universal Music Group adds, “It’s an exciting day for LEGO VIDIYO, finally revealing the full experience and topping it with the first ever record deal for a LEGO minifigure. Music goes hand in hand with creativity and plays a role in a child’s development, all these new products, BeatBits and characters will inspire young people as they discover music, artists, and new sounds from around the globe. While expanding their creative and technical skills and having fun – children will be learning, experimenting, and expressing themselves in their very own music videos.”

LEGO VIDIYO is aimed at children aged 7 – 10 and provides a safe universe where they can traverse the worlds of physical and digital play. As LEGO VIDIYO requires verified parental consent – along with anonymity – and with external moderation of all content uploaded to the app feed, parents can be reassured their child is unleashing their creativity while staying safe online. 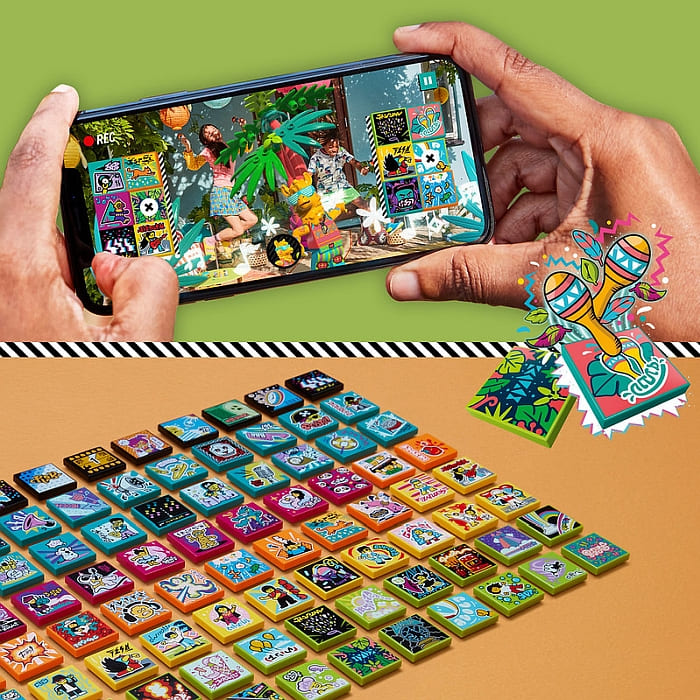 BeatBoxes and Bandmate Mystery Boxes all include instructions and a collector’s leaflet and will be available in most countries around the world from March 1st. The BeatBoxes are priced at 19.99 EUR/USD (RRP) and the Collectible Bandmate Mystery Boxes at 4.99 EUR/USD (RRP). For further details, check the LEGO VIDIYO section of the Online LEGO Shop.

What do you think? How do you like the idea of LEGO VIDIYO and blanding physical play, virtual play, and music? Are you interested in the experience? Feel free to share your thoughts in the comment section below!