Although I haven been purchasing practically every LEGO Super Hero set, for some reason, I kept avoiding the ones with mechs and what fans call constraction (construction + action) figures. The #76198 LEGO Spider-Man & Dr. Octopus Mech Battle however felt different, and it made it to my shopping list. 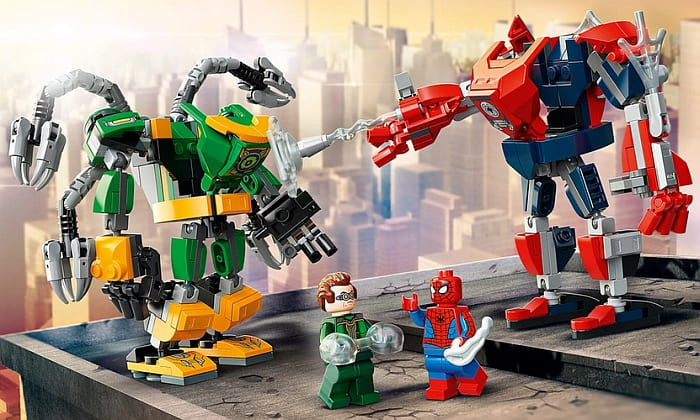 First of all, the price of this set is pretty low ($19.99). It’s basically a set I can throw into my online shopping cart to meet the minimum dollar amount for freebies and other perks. Secondly, this inexpensive set comes with two nice minifigures. This is a strong reason to buy the set, given that many desirable LEGO Super Hero characters only appear in expensive sets. And finally, the mechs with all their poseable joints offer a rather different and interesting building experience – more so than the average normal vehicle of this size.

And the #76198 LEGO Spider-Man & Dr. Octopus Mech Battle also addresses something I had issues with in the past. When a set only offers one mech, who am I supposed to battle? Having two opposing characters in one set brings instant action and interactive play-features. However, LEGO designers had to do some careful juggling to balance them and stay within budget. 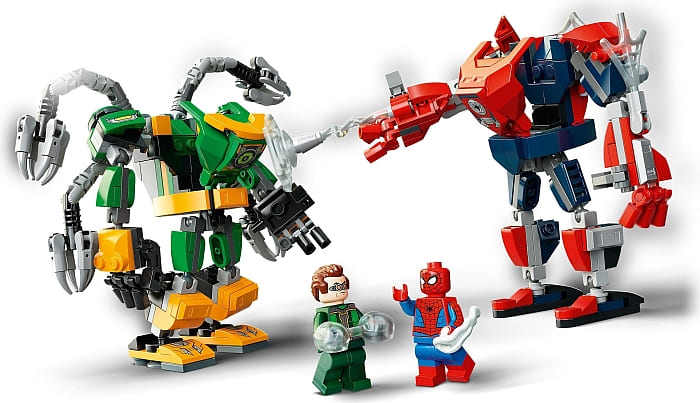 Imagine that you have a character that you want to add a few more parts to. Problem is, based on how costs work, if you made a slightly bigger model, it would need to cost more due to its size. Well, now put it in a larger set and double the price. The value is still there, but now maybe you need to make the other mech a little smaller, or with fewer parts. I believe that’s what was done in this set. In order to get Doc Ock all his limbs, Spidey was slimmed down – which actually works well for his more agile character. This is a clever way to allocate parts without raising the price. But does it hurt one mech being short changed? Let’s take a closer look. 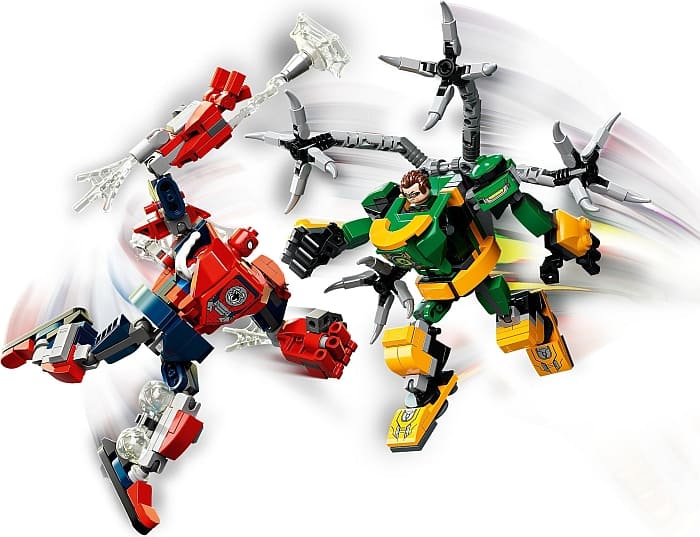 The mechs presented in the #76198 LEGO Spider-Man and Dr. Octopus Mech Battle have a sort of uniform system built into their frames that has been followed by other LEGO Super Heroes mechs of similar size. The cockpit section is fairly standardized as well as the length of limbs and placements of joints. It is the extra decorations and the unique styling that differ from mech to mech.

First up is Dr. Octopus. Along with his standard arms and legs, he features four additional highly flexible arms. In truth, this seems exactly like something the character would build and pilot. Though the minifig itself doesn’t have extra arms, so this means he is either an alternate universe Doc Ock or it’s before his accident. I like to think all these mechs are from their own universe. It helps explain why some of these characters are in mechs in the first place. 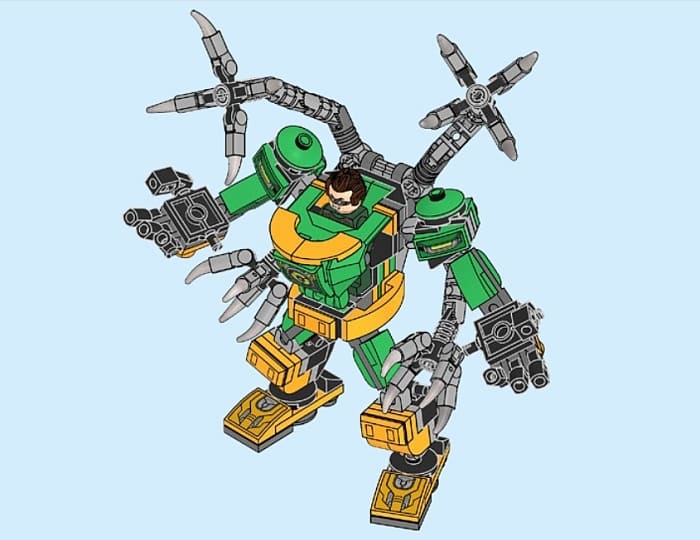 As for Spidey, he got a slimmed down mech. However, his character has always been associated with being extra limber. So, his mech fits the character. And what really makes this mech work is how it incorporates all the specialized webbing pieces. Most of the time, a set will use a smattering of these special web parts but leave out the rest. Or they may use them all, but some feel out of place. This mech not only uses all the web elements, but they really mesh well. The only odd part is the web cuffs attached to the leg. But frankly, I just appreciate the fact that there is place for all the web parts. 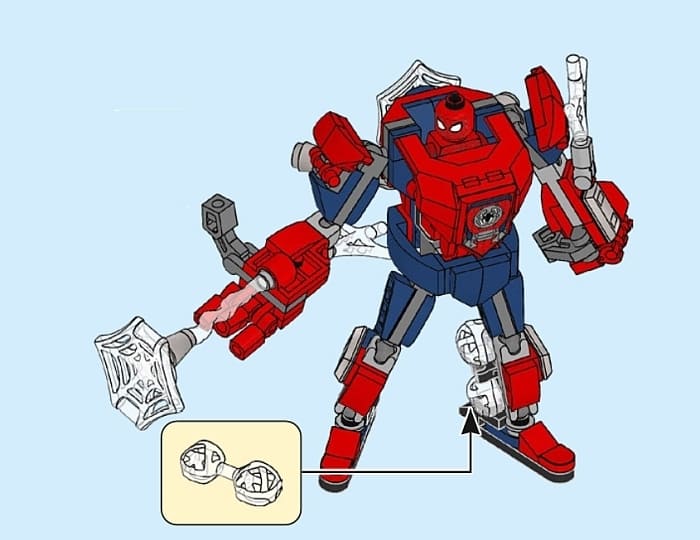 If you are just starting out with LEGO mechs, I would recommend this set over one of the single mech sets. And this can also be important if you are giving it as a gift. The reason is that with two mechs, the #76198 LEGO Spider-Man and Dr. Octopus Mech Battle feels more like a complete play-set rather than something odd to collect, or something you have to add another set to. However, if you aren’t a fan of the first two waves of LEGO Super Heroes mechs, this set probably won’t win you over.

In summary, I find the #76198 LEGO Spider-Man and Dr. Octopus Mech Battle more enjoyable than the single LEGO Super Hero mech sets. Building two mechs – one right after the other = does more to get me excited for building some of the other mechs in the LEGO Super Hero line. I sort of get into a groove and want to see how the other sets differ in their styling.

Having minifigs included with mechs is a combination that many LEGO fans don’t like. It feels like LEGO designers tried to blend constraction figures with minifigures. So, you end up with a minifig inside a constraction figure of the same character. I won’t argue with anyone who doesn’t like the look, but for me, they seem to work. 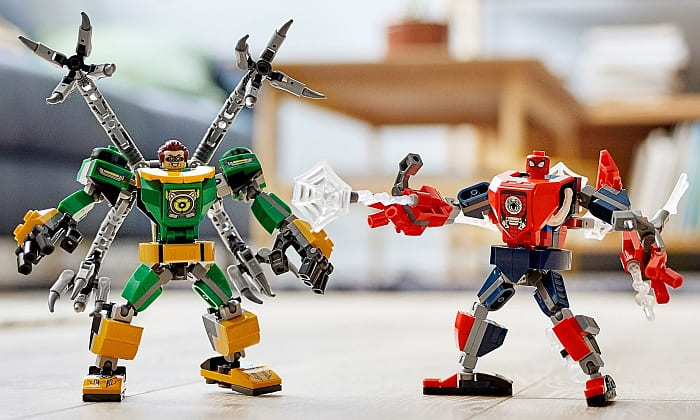 I used to buy the three and a half-inch super hero action figures when I was younger. And these LEGO mechs fill the hand the same way. Plus, they are still superheroes in nature. They are sort of like the LEGO Star Wars Microfighters; people either like them, or they don’t. Although I recommended this set for having two mechs, you might want to try out one of the single ones before committing to a double-pack. But if you want a cool action-oriented set, the #76198 LEGO Spider-Man and Dr. Octopus Mech Battle is a pretty good choice for the price. 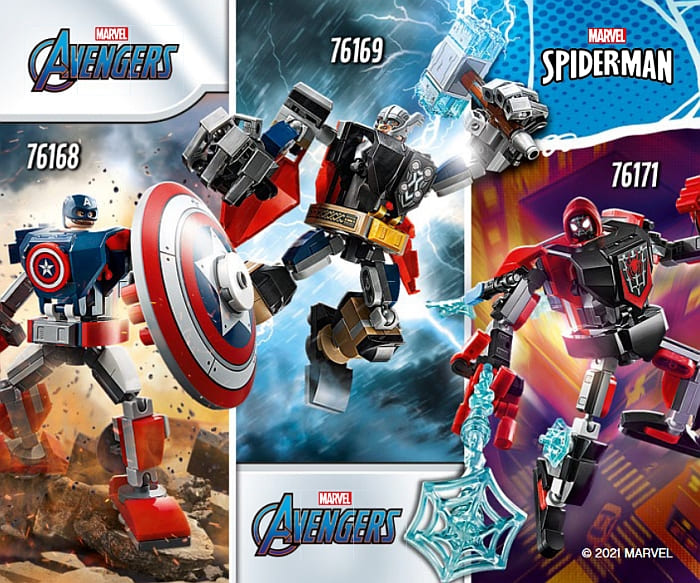 If you would like to check out the other, similarly designed mechs in the collection, here is the list: #76140 LEGO Iron Man Mech, #76141 LEGO Thanos Mech, #76146 LEGO Spider-Man Mech, #76150 LEGO Spiderjet vs. Venom Mech (this one comes with a mech and a jet), #76168 LEGO Captain America Mech Armor, #76169 LEGO Thor Mech Armor, #76171 LEGO Miles Morales Mech Armor, and of course the #76198 LEGO Spider-Man and Dr. Octopus Mech Battle we just talked about. You can find them all at the LEGO Marvel Super Heroes section of the Online LEGO Shop.

What do you think? How do you like the LEGO Marvel Super Heroes mech collection? Do you have any of the sets already? Do you collect them? Or play with them? Which one is your favorite? And do you prefer single packs or double packs? Feel free to share your thoughts and discuss in the comment section below!