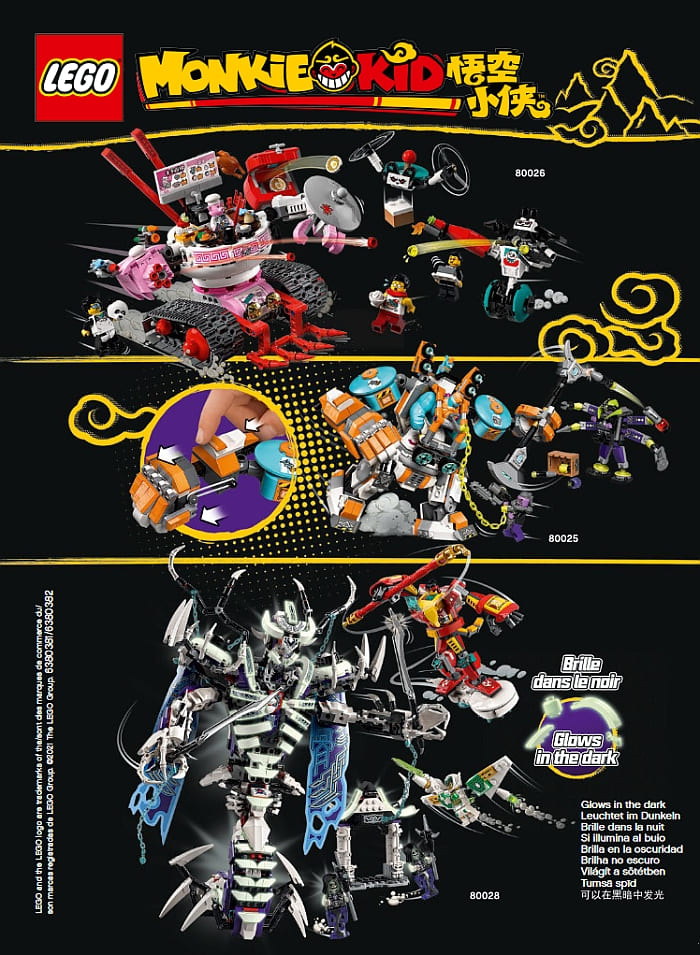 As you may recall from our previous discussions, LEGO Monkie Kid is the LEGO Group’s first product line based on Chinese culture, reimagining the Monkey King tales from the classic Journey to the West novel. The story focuses on Monkie Kid and his friends battling against the Demon Bull King and his army of Bull Clones trying to take over the city. There is a television show accompanying the sets with, but so far, the episodes only aired in Malaysia and Australia. However, you can catch some of them on YouTube. 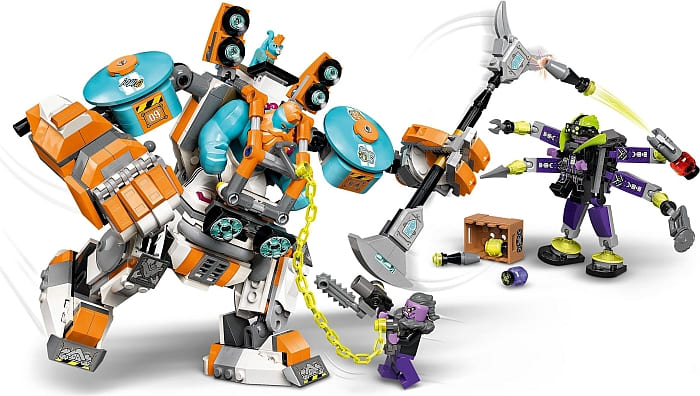 The LEGO Monkie Kid line is known for large and highly detailed mech, but the #80025 LEGO Monkie Kid Sandy’s Power Loader Mech is the first mech made specifically for a big-fig. As you can see, the mech is short and stocky to help balance the already large size and heavy weight of Sandy, the big-fig, but it still has a tendency to topple over at times, as you will see in the video further below. 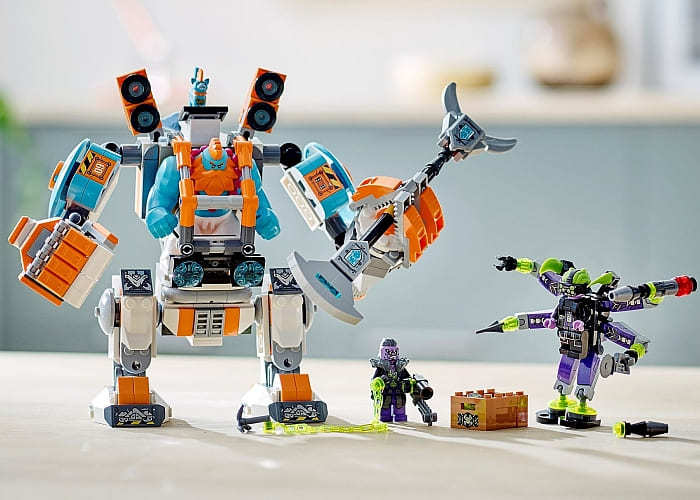 Both arms of the mech have fun play functions. The left arm is activated with a rubber band to deliver punches, and the right arm can spin around to rotate Sandy’s Crescent Staff. There are also flip-out jet boosters, and a booth on top for Mo the cat. There are also a couple of spider demons – Syntax (with a small mech) and Huntsman – to play out some battle scenes. This is a great playset overall, and a good example of mech building. In fact, I like it better than some of the previous LEGO Monkie Kid sets with mechs that are awesome but are also overwhelmingly large. The set comes with 520 pieces and retails for $54.99. It is available at the LEGO Monkie Kid section of the Online LEGO Shop. 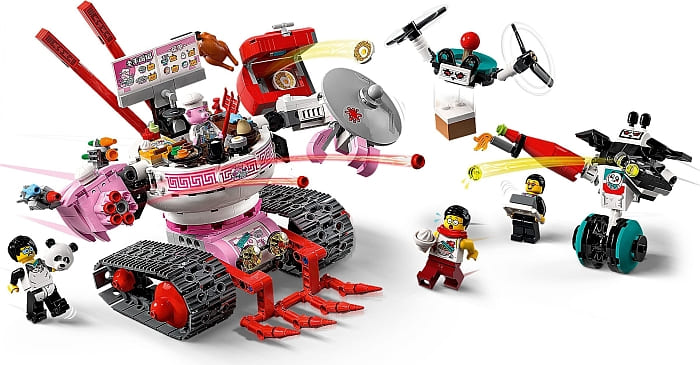 The #80026 LEGO Monkie Kid Pigsy’s Noodle Tank is one of the most imaginative sets I have seen since the first wave of The LEGO Movie sets. It’s a mech on tracks, shaped like a giant noodle bowl. And it has a pink stud-shooting gatling gun on one arm, two chopsticks weapons in the other arm, and a red rake looking weapon at the front that moves up and down as the mech is pushed. In addition, the tank has a rotating kitchen with lots of food items and a disc-shooter in the fridge. 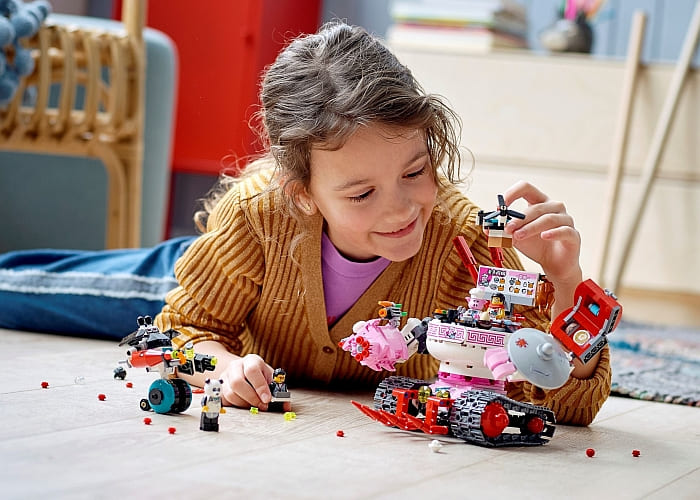 On the baddies side, there is a food delivery panda drone and a lemonade-shooting panda robot. The whole thing is just incredibly fun. The set comes with 661 pieces and retails for $59.99. It is available at the LEGO Monkie Kid section of the Online LEGO Shop. 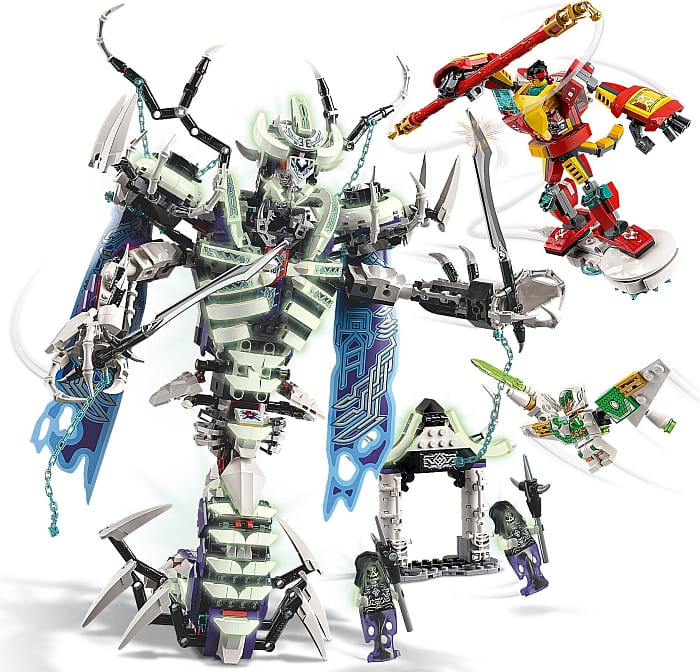 If you thought the first to sets were fun, check out the third set, the #80028 LEGO Monkie Kid The Bone Demon. First of all, it has the most glow-in-the-dark pieces LEGO released in a single set to date (10 different elements and a total of 76 pieces). In addition, according to a tweet by Simon Lucas, Senior Creative Director at the LEGO Group, the designers made the set experience to be like a video game, “LEGO designer Justin Ramsden and I really tried to make the building journey part of the play. Like a video game, there’s a battle at each level, and in the end you face the big boss.” 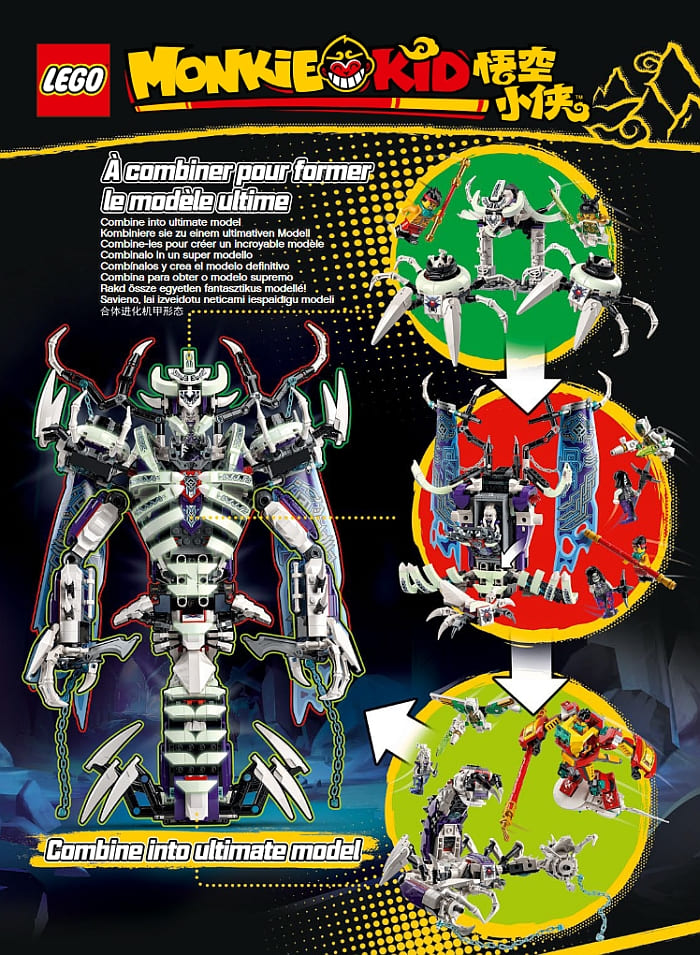 Okay, so how does this work? The idea is that through the set, you can defeat the Bone Demon three times. First, you build and battle two Bone Spiders, then the White Bone Demon’s crypt (where Monkie Kid and Mei take on the Bone Spirits and a Bone Scuttler), then a Bone Scorpion. Finally, all builds are combined to create the large Bone Demon that’s over 15.5 in. (40 cm) high. To combat these formidable enemies, Monkie Kid has a battle mech and Cloud Board, and Mei has a winged jetpack, and each come with buildable weapons that can be upgraded as the challenges get tougher. 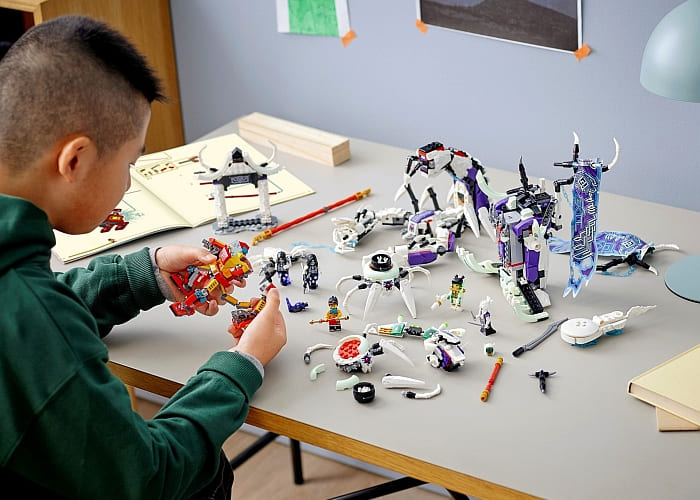 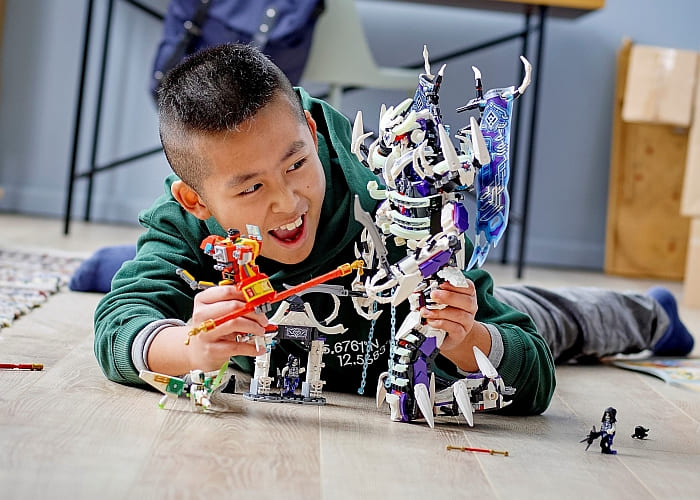 Some parts that make up the Bone Demon look better than others, but overall the set materializes a really interesting concept of progressive play, and the final build is definitely impressive. And of course, glow-in-the-dark parts are always cool. If you want to see how the Bone Demon comes together, watch the video below. The set comes with 1,373 pieces and retails for $119.99. It is available at the LEGO Monkie Kid section of the Online LEGO Shop.

I feel that this is a particularly strong wave for the LEGO Monkie Kid line. All three sets are well-designed, creative, fun, and not too expensive. My favorite is the noodle tank, because it is just so hilarious, but the other two sets are very good as well. Because all three sets come with lots of play-features and movable parts that are hard to explain with just words, I have included video-reviews in the player below.

What do you think? How do you like the new LEGO Monkie Kid sets? Did you get any of them already? Which is your favorite? Feel free to share and discuss in the comment section below!