LEGO just revealed the first wave of 2023 LEGO Ninjago sets, so it’s time to take a look at what our ninja friends are up to. Below are the details of nine upcoming sets that will be released in the first half of next year. 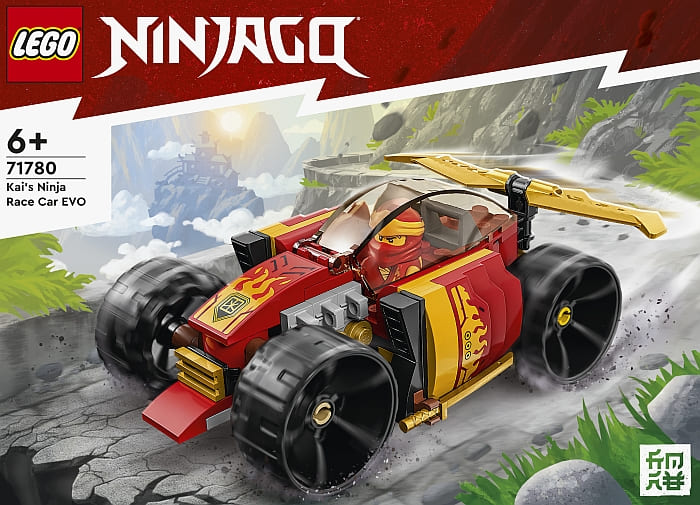 #71780 LEGO NINJAGO KAI’S NINJA RACE CAR EVO – Help Kai transform his supercool Ninja Race Car for fast-paced, thrilling adventures in NINJAGO City! Jump in the cockpit and take a ride in the off-road vehicle with mega tires and a golden wing spoiler. When you pull over, swap the wheels and upgrade it to an even more powerful and rapid street racer ready for some exciting showdowns! Measures over 2 in. (5 cm) high, 5.5 in. (14 cm) long, and 4 in. (10 cm) wide, and comes with Kai – 94 pieces. Price: $9.99

#71781 LEGO NINJAGO LLOYD’S MECH BATTLE EVO – Get set for a series of awesome battles as you stride into action with Golden Lloyd and his mech to fight Bone Warrior! You need to watch out for the evil green bone warrior and his mech’s pack of assorted bone weapons. Upgrade Golden Lloyd’s mech to full strength by adding golden armor and wings. For succeeding in your challenge, you will be rewarded with a collectible Resilience banner. Standing over 7 in. (18 cm) tall, and comes with Lloyd and Bone Warrior – 223 pieces. Price: $19.99 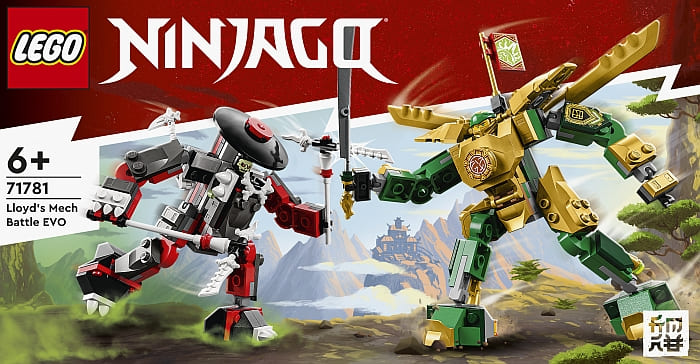 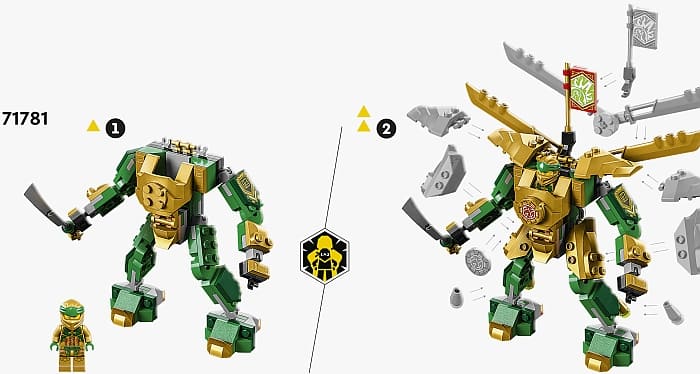 #71782 LEGO NINJAGO COLE’S EARTH DRAGON EVO – Join forces with Cole and his earth dragon for an all-action clash against the evil Bone Scorpio. But watch out, the Bone Scorpio is armed with a scythe! To take him down, upgrade the dragon into a bigger and more powerful beast by adding golden wings and a tail. For succeeding in your challenge, you will be rewarded with a collectible Strength banner. Standing over 5.5 in. (14 cm) tall, and comes with Cole and Bone Scorpio – 285 pieces. Price: $34.99 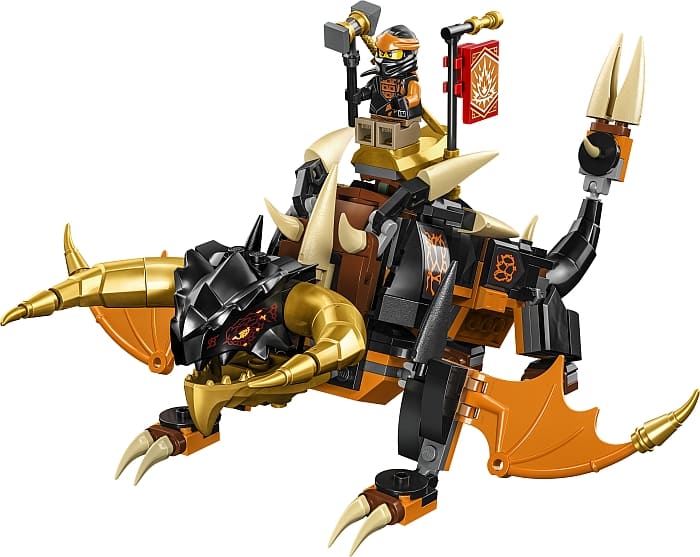 #71783 LEGO NINJAGO KAI’S MECH RIDER EVO – Roar into battle with Kai in a mech suit on the back of his powerful motorbike. He and Nya need to take down the green bone warriors! Bone King is armed with a sword and Bone Hunter has a bone mattock and a sword. You can seize victory by upgrading the ninja bike with golden elements. For succeeding in your challenge, you will be rewarded with a collectible Focus banner. Measuring over 3.5 in. (10 cm) high, 9.5 in. (25 cm) long, and 3.5 in. (9 cm) wide, and comes with Kai, Nya, Bone King, and Bone Hunter – 312 pieces. Price: $44.99 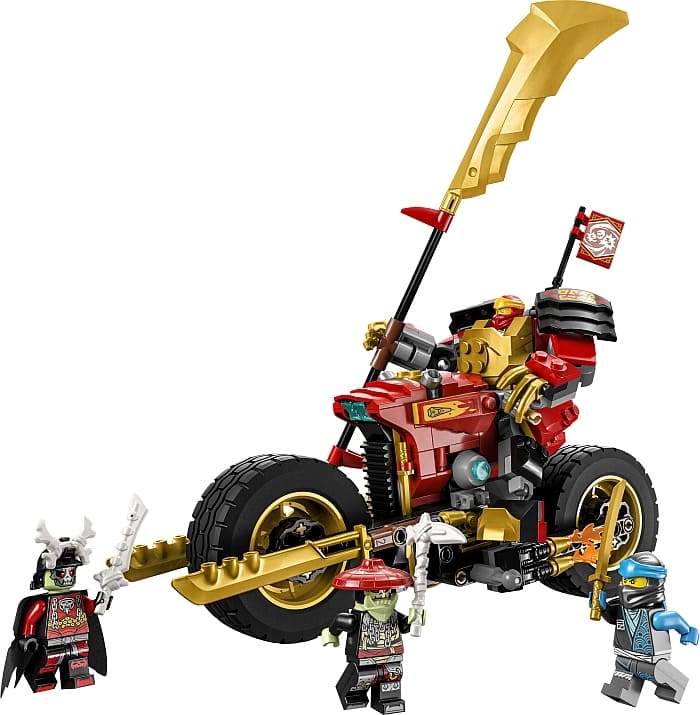 #71784 LEGO NINJAGO JAY’S LIGHTNING JET EVO – Soar into the sky with Jay in his supercool Lightning Jet to protect NINJAGO City! Keep an eye out for villains as you patrol the airspace above the ninja’s home. When you land, upgrade the jet to make it bigger and more intimidating by adding golden blades, a rudder, and two powerful stud shooters, before zooming back into the clouds. Measuring over 2.5 in. (6 cm) high, 8.5 in. (22 cm) long, and 8.5 in. (21 cm) wide, and comes with Jay – 146 pieces. Price: $9.99 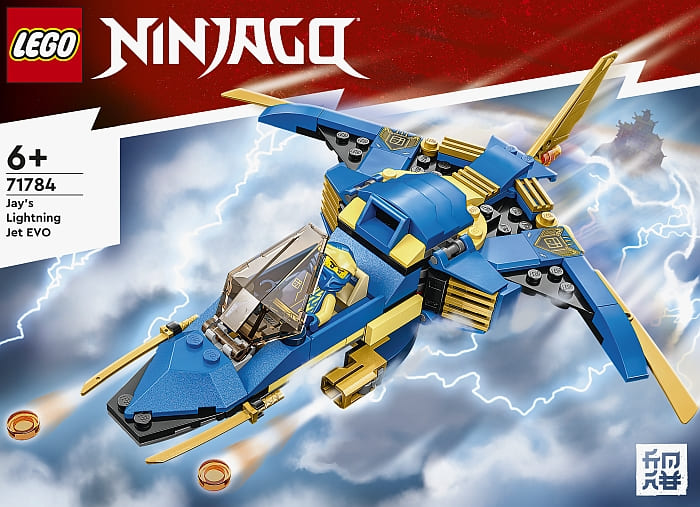 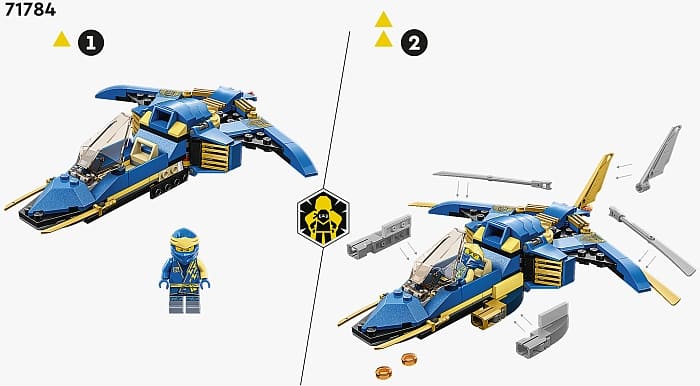 #71785 LEGO NINJAGO JAY’S TITAN MECH – Get ready for an epic battle as Jay in his most powerful-ever mech and his fellow ninja warrior Nya take on three dangerous green bone warriors. Look out! Bone King, Bone Knight, and Bone Hunter are ready to take them both down with a fast-firing double crossbow loaded with four darts and mounted on a wagon. Fight back with the mech’s large dragon blade, two katanas, and two shooters. Standing over 11 in. (28 cm) tall, comes with Jay, Nya, Bone King, Bone Hunter, Bone Knight, and Pixal Bot – 794 pieces. Price: $79.99 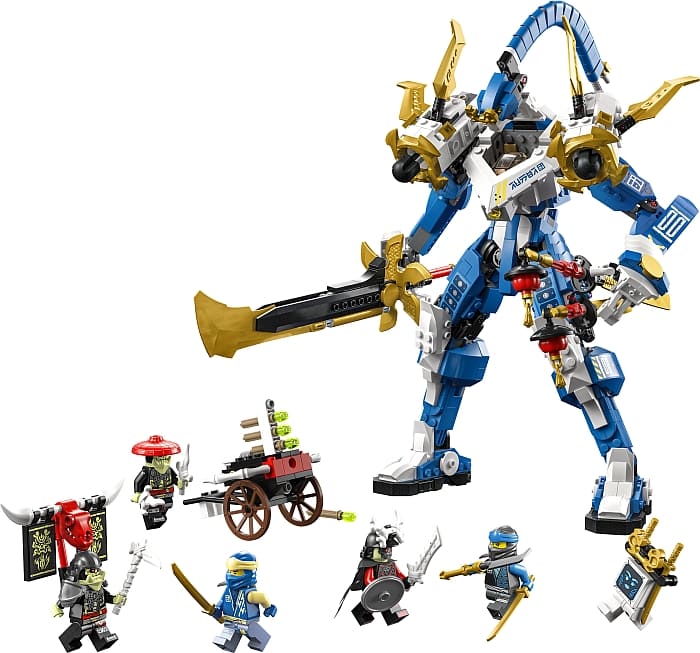 #71786 LEGO NINJAGO ZANE’S ICE DRAGON CREATURE – Descend from the skies with Zane and his awesome Ice Dragon to take on three evil green bone warriors. Attack with the dragon’s sharp ice claws, horns, tail, and ice-breath! When you have won the clash, rebuild the model into an imposing dragon warrior on two legs wielding a large golden blade. You have the choice between two amazing battle-ready creatures! Measuring over 7.5 in. (19 cm) high, 18 in. (46 cm) long, and 16.5 in. (42 cm) wide, and comes with Zane, Pixal, Bone Knight, Bone Warrior, and Bone King – 973 pieces. Price: $99.99 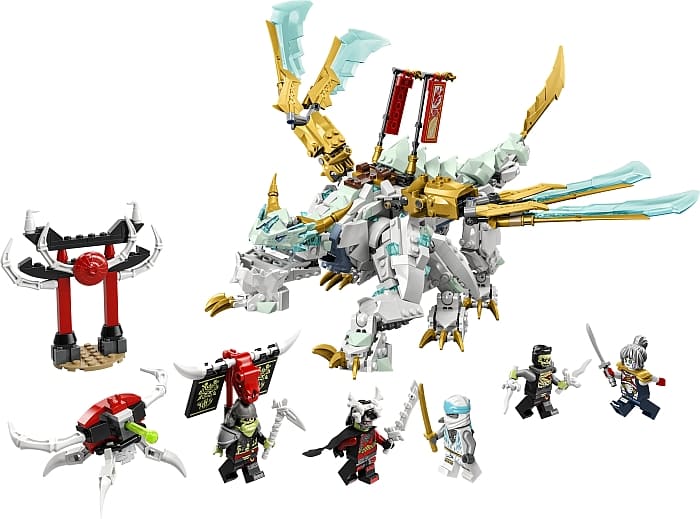 #71787 LEGO NINJAGO CREATIVE NINJA BRICK BOX – Work on your skills with Nya, Kai, and Master Wu at the Ninja Dojo. Develop your strength and agility at the training area on the obstacle course, but stay alert because Bone Hunter wants to break in! Get ready to race off in the ninja car or on the motorbike to confront him. You can also use the 530 pieces from the brick box to build the new ninja models and builds suggested. For the first time ever, a Ninjago set comes in a brick box that also makes for a great storage solution and for quick and easy cleanups. The dojo measures over 6 in. (16 cm) high, 6.5 in. (17 cm) wide, and 2.5 in. (6 cm) deep, and comes with Kai, Nya, Master Wu, and Bone Hunter – 530 pieces. Price: $59.99 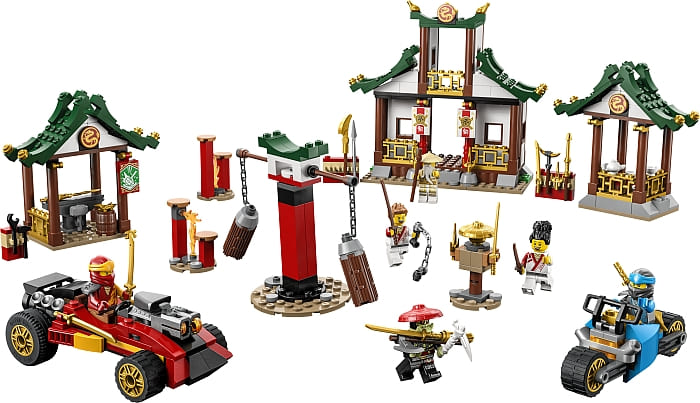 #71800 LEGO NINJAGO NYA’S WATER DRAGON EVO – Ride into battle with Nya and her water dragon to take on the evil Bone Guard in a thrilling showdown! Lloyd is there to help too. Watch out as the Bone Guard uses his swords as wings to launch a flying attack with his bone shuriken. Upgrade the dragon with golden wings to make it bigger and win the battle. For completing your mission, you will be rewarded with a collectible Generosity banner. Standing over 5 in. (13 cm) tall, and comes with Nya, Lloyd, and Evil Guard – 173 pieces. Price: $19.99 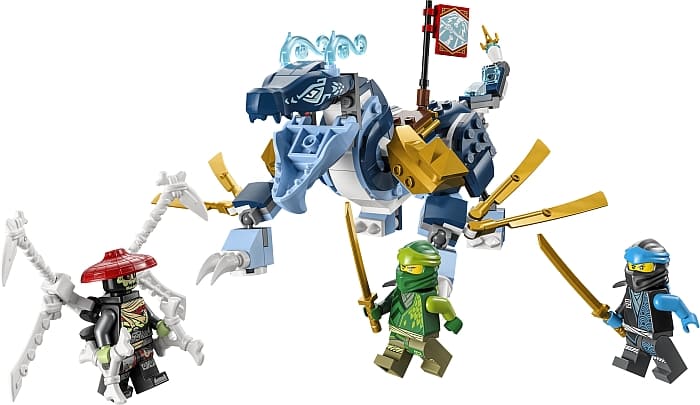 For more information and pictures of the upcoming LEGO Ninjago sets, visit the LEGO Ninjago section of the Online LEGO Shop. And feel free to share and discuss your thoughts on the new sets in the comment section below!

You might remember that back in October the LEGO Ideas team announced a new contest to celebrate the 50th anniversary of Dungeons & Dragons, the popular fantasy tabletop role-playing game. The contest is going through several stages, one of which is the Fan Vote stage – happening right now!

Basically how this works is that a panel of judges consisting of members from the LEGO Ideas team, and the Wizards of the Coast team, picked five designs from the pool of submissions, and they are now asking LEGO fans to vote for their favorite.

Unlike typical LEGO product idea submissions, the Fan Vote phase for this promotion is intended to help the judges gauge fan interest in specific designs, and validate fan excitement for the theme. The judges will ultimately choose which model from the Fan Vote phase will become a LEGO Ideas set, regardless of the number of Fan Votes obtained – although lots of votes certainly help! Once the final model is selected by the judges, the fan who submitted the design will have the pleasure of becoming the latest LEGO Ideas Fan Designer!

Below are the five selected submissions. and you can cast your vote on the contest page at the LEGO Ideas website. Until December 12th. Please note that you only have one vote, so choose with care! The LEGO Ideas team will share which design has been chosen to become the LEGO Ideas Dungeons & Dragons product and will also share the result of the Fan Vote (let’s see if the most votes won the day, or if other aspects made the determination!) on LEGO Ideas no later than December 19th, 2022. 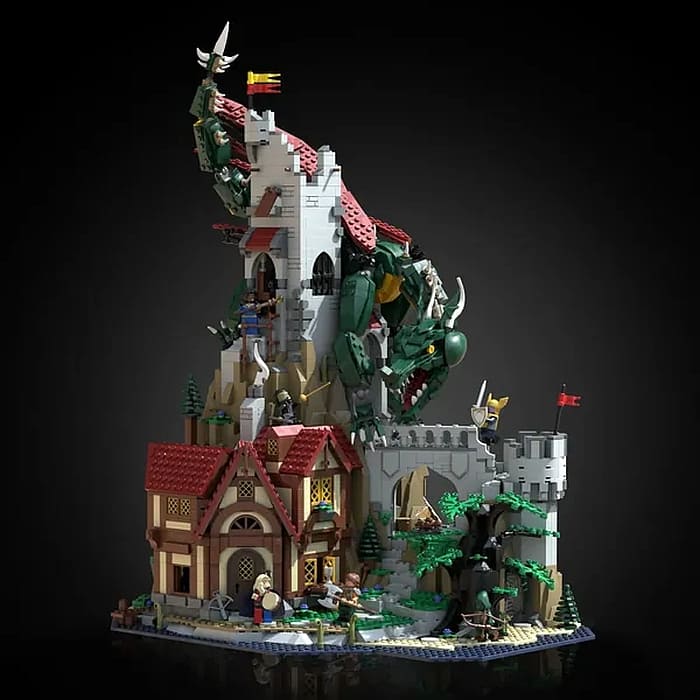 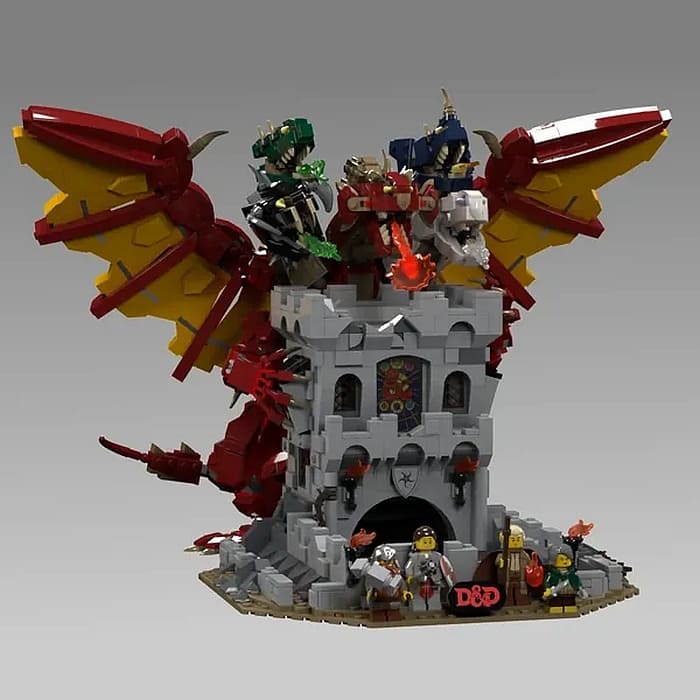 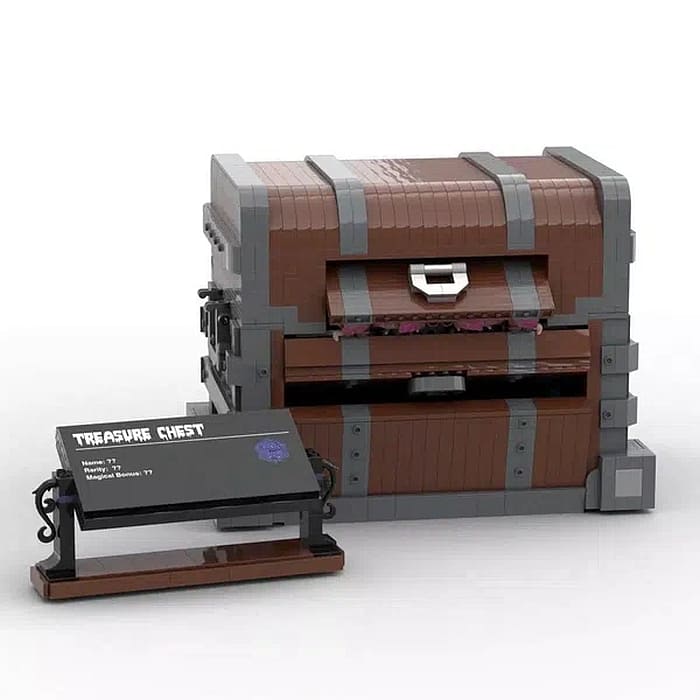 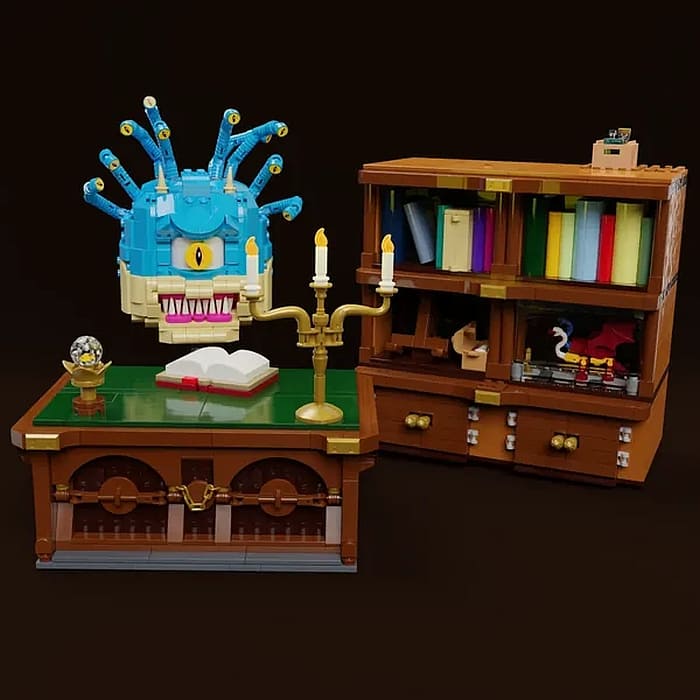 XANATHAR, THE BEHOLDER by Shaddowtoa 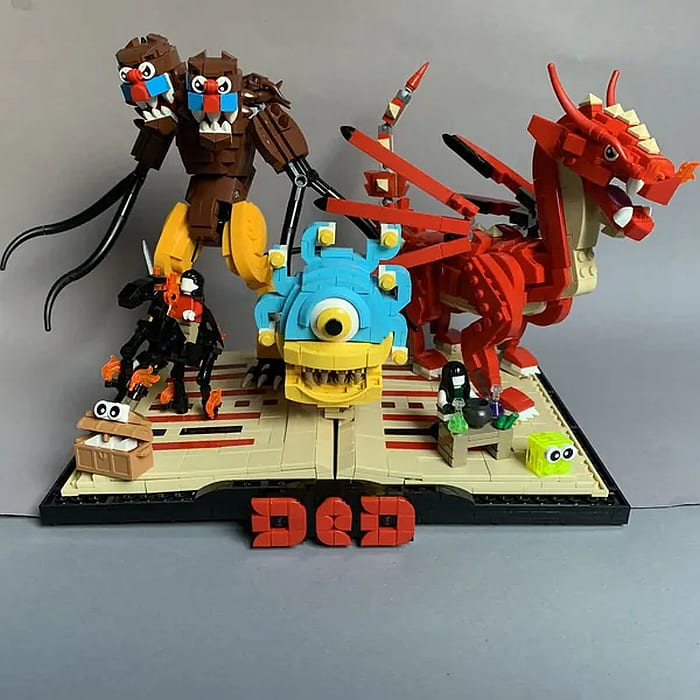 THE MONSTER MANUAL by KolonelPureCake 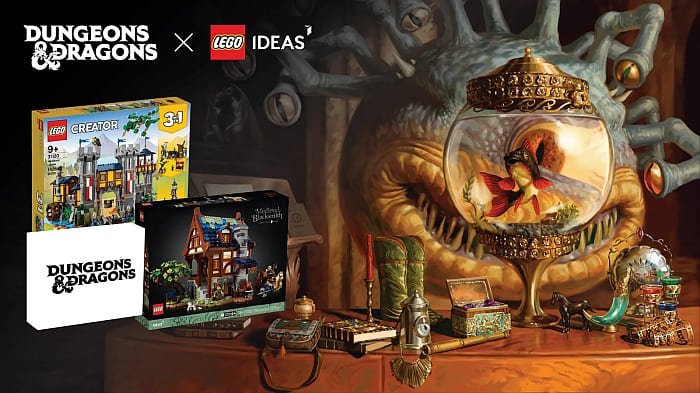 Many LEGO fans and fans of Dungeons & Dragons are very excited about this contest, as it will bring together two of their favorite hobbies into one LEGO set (and perhaps more?). What do you think? Feel free to share your thoughts and discuss in the comment section below!