Discovery of the Terracotta Warriors

by Thita (admin) on December 21, 2010
in Featured LEGO Creations

One of the most amazing discoveries of recent times is the Terracotta Army of Emperor Qin. The emperor ordered the creation of a whole underworld kingdom for himself with armies and servants for the afterlife. An ambitious project for sure! 🙂 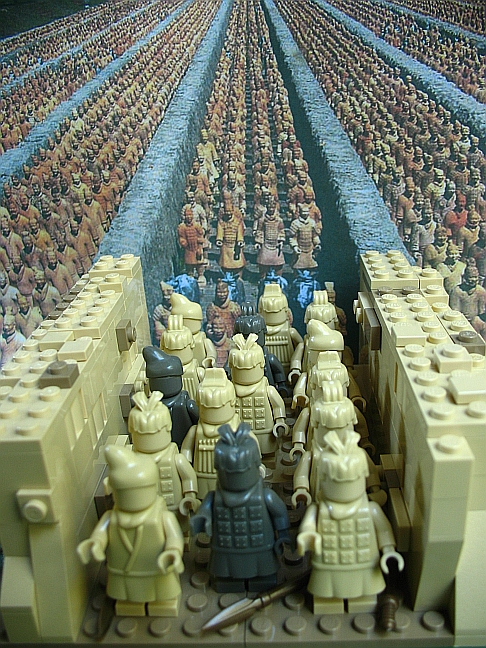 There are an estimated 8,000 life-size statues, dating back to 210 BC. Originally the warriors were fully painted and fully armed, and each had individually carved unique facial features, hair styles and clothing, to make them as diverse and life-like as possible. 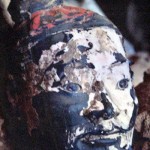 Unfortunately after being unearthed the original paint rapidly pealed off from most of the warriors due to being exposed to air, although fragments of the original brilliant colors are still visible on some of them. The warriors’ weapons have been stolen through history.

The Terracotta Army were discovered in 1974 by local farmers, and then archeologists took over the excavation. The main mausoleum of the emperor and many of the terracotta warriors themselves have not yet been unearthed due to fear of not being able to preserve them properly.

Here is a picture of how the warriors were made: 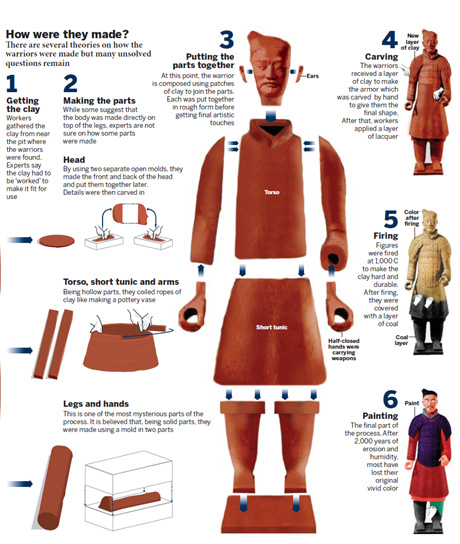 If you have a chance to see them in person by all means do so! They are an awesome sight! I had the fortune of seeing a few of them in Europe back in the ‘80s.

ABOUT THE LEGO TERRACOTTA ARMY:

When BrickTW, the Taiwan based designer of custom accessories for LEGO minifigures released their line of products for 2010, I just had to use them to build my own version of the Terracotta Army!

As you can see, BrickTW’s armor and headgear are very high quality and beautiful in style. They match LEGO’s colors perfectly and fit LEGO minifigs like a charm. (You can read my full review on BrickTW’s products here.)

To extend the size of my Terracotta Army, I used a background picture. The interesting thing is that this picture is not of the original Terracotta Army, but that of a replica from the Forbidden Gardens in Katy, Texas! (Near Houston) Yep! You read that right! There is a Terracotta Army in Texas! 😛

I really would like to have added printed heads to my Terracotta Warriors to highlight the uniqueness of their faces, but unfortunately I could not find printed LEGO minifig heads in the right color. But I think they still look nice. I hope they will guard me in the afterlife! 😉