If you love LEGO and are a fan of LEGO colors, you’ll love “Bayer test-strikes” or simply called “Bayers”. You may want to read my previous article titled LEGO Colors – Introduction to familiarize yourself with the history of LEGO colors, and in today’s article, we will focus on some very unique bricks in LEGO’s history. So lets start from the beginning… 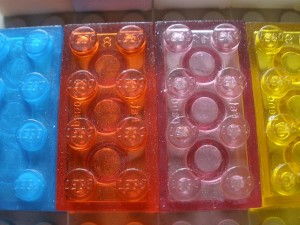 ➡ 1958: LEGO has a bit of trouble with the CA plastic; it’s tough and colorfast, but it warps over time – not a good thing for a product that has a reputation of being precise. Trying to find a solution LEGO contacts Bayer, a very large plastics-supplier in Germany. 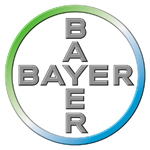 Bayer is asked by LEGO (around 1960) to make them a better plastic; non-warping, flexible but also rigid, color fast and the lot. Bayer is up for the job and gets to work. To be able to decide whether the plastics work, they get a few of LEGO’s older molding machines with 2×4 brick-molds. Bayer starts to make test strikes.

These test bricks were meant to be used only in conversations and briefings between Bayer and LEGO. But some of them “escaped” – factory workers took them home for their kids to play with, others were simply put in boxes, stashed away until someone took them home.

Meanwhile Bayer continued to test colors as well. Many of these colors were tried and produced, but never made it to the public until a quarter century later (or never at all). We know of some of these colors from postcards of tan pyramids in the 60s, green bricks in the early 70s and dark gray even before light gray existed. 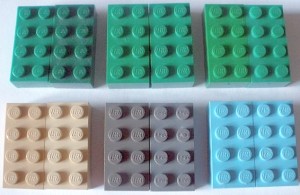 These colors where made for the LEGOLand parks, but also for product lines such as Modulex. Modulex comes in colors not seen in LEGO for a long time or at all. But we do have Bayers test bricks in those colors! 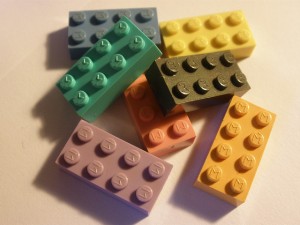 ➡ 1960 to 1975: This is by far the most interesting time to collect 2×4 bricks from! They have beautiful colors with the old LEGO logo – colors that might never be used again. Or colors you might only know from certain small parts – like trans-black, trans-blue or Maersk blue – long before the color was used in a brick! 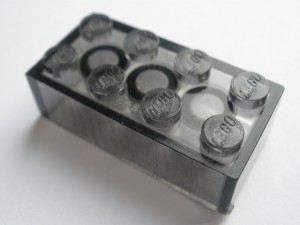 The next important step was to decide which grip (clutch) to give the bricks. These became known as the A,B,C,D tests. Through a contact with a LEGO representative I have had a confirmation on the grip-tests done with the A,B,C an D coded bricks. 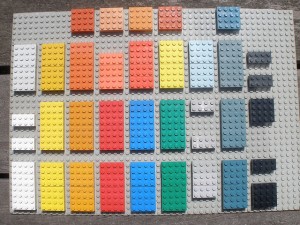 His words: “The story I have been told is that four different bricks with different clutch-power were made. And Ole Kirk (or maybe Godfred) had to decide which one was best. He decided for the brick with the letter C and since that time the C-norm brick has been our reference brick.” 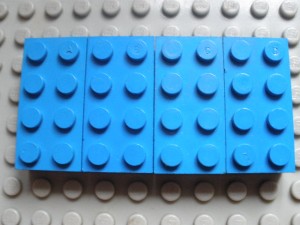 This C-norm is the grip (clutch) that our bricks have right now. And when this C-norm is established, Bayer gets molds with a C on each stud where the LEGO logo normally is. These are now called 8xC bricks and still come in a lot of colors, but are clearly more modern colors. 8xC bricks feature amongst others, the first Pearl-light-gray bricks. These bricks also have numbers on the bottom: 03, 05 or 06. 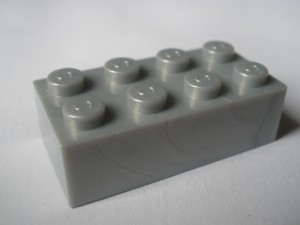 After this it gets a bit confusing. There is some time period overlap; colors and letters on the bricks switch between 7xC and 8xF. The only way to determine when a certain brick was made might be through color matching with real LEGO colors.

7xC comes in the most colors (after the original LEGO Bayer), and most of these colors are found in sets (though not all in 2×4 bricks). We find nice pinks and purples from the LEGO for girls sets, also light-gray and light-bluish-gray, as well as several different blues and greens. 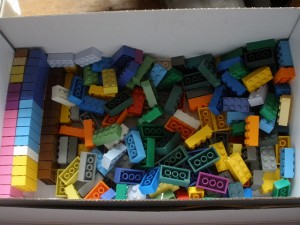 In addition a lot of marbled bricks come in 7xC which I haven’t seen in any 8xC brick. 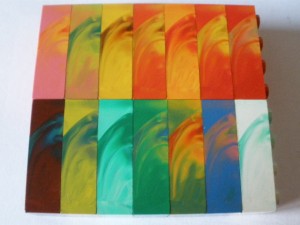 Besides Bayers from Germany there are also a few test bricks known from England, see the marbled red/whites below. These were made by British LEGO Ltd. in Wrexham Wales, so they should be named Wrexhams. 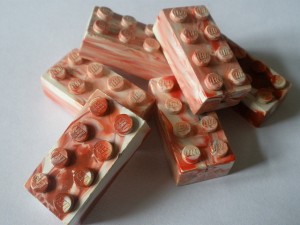 The 8xF bricks are found in two forms (actually 3, but I’ll discus those later), normal 8xF and 8xF with one F like a little flag. I believe these to be a simple molding fault, but I know collectors that collect both. 8xF bricks do not come in many colors like the 7xC, but feature more “normal” LEGO colors. This is logical as these were made in the late nineties, when LEGO downsized colors. They do have tan and light orange amongst their palette. 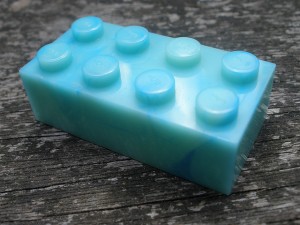 There are many tiny differences in the LEGO Bayer bricks over the years, not only in the letters, like LEGO or A, but also in Pat.Pend or simply the bottom design. I have bricks with closed studs (open studs were invented to prevent the stud from collapsing), side pips, top pip and even bottom pips. 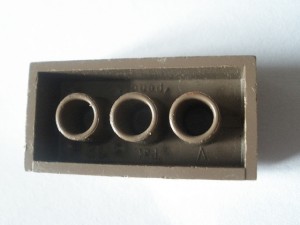 After years of leaking out of the Bayer plants, some of these LEGO Bayer bricks found their way in to my collection and I got fascinated with them; their beautiful colors, old logos, new logos, letters, everything! Trying to find more has led me on a trip around the world! And they seem to turn up everywhere! But no country has more to offer than Germany, the Bayer home-base.

After many years of collecting Bayers, I have made numerous contacts, loads of friends and fellow collectors; and they all help me find new items. Also, having collected more than one of each part, I am able to trade with other collectors, helping them make their collection bigger. 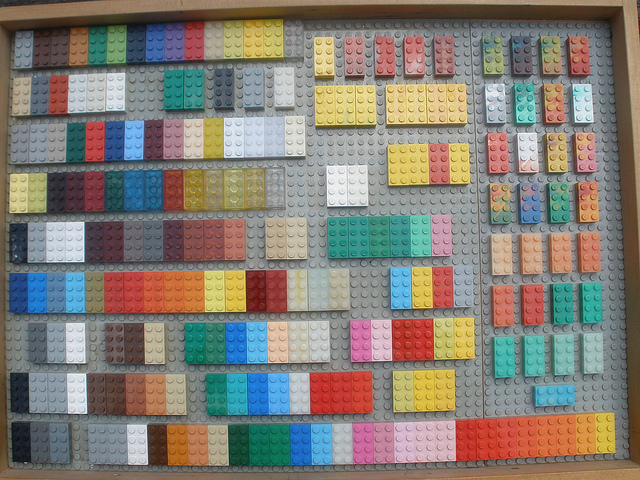 Like with any other collection, the fun is in the hunt for new parts! Once found, you catalog them, make pictures, share with others, and put them in their final resting place – your collection.

Right, I promised to tell about the third 8xF LEGO Bayer brick, so here it goes. Besides the “normal” Bayers, some extraordinary ones turn up at times. Amongst those are the 8xF with a block-letter F instead of the normal slanted F. Also amongst these are 7xC1 bricks with LEGO on the eighth stud. Or the other way round; 7xLEGO with one letter on the eight stud. 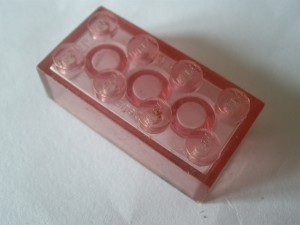 Even after all these years, I still find new LEGO Bayer bricks never before seen by the public. I try and show them to all who want to see them, on BrickLink, Brickshelf and Flickr. If you are interested or simply wish to know more, try “Bayer”, “LEGO” and “letter” on your search engine.

Next post: LEGO sale: free shipping on orders over $75!