Tips on repurposing a LEGO-set!

The major difference between an official LEGO creation and a model made by an Adult Fan of LEGO (AFOL) are the number of parts AFOLs use. It’s a rather common occurrence to talk to other AFOLs about a LEGO set, then hear that they had to buy multiple copies of it to make their own. 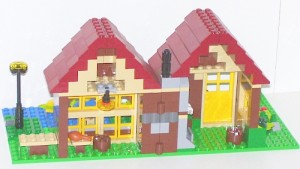 This LEGO-designed Log Cabin does not have a complete filled-in roof.

The reason for this is the fact that we do not take shortcuts. We like a creation to be fully realized. LEGO often leaves holes in their designs when they can get away with it. For instance, when making a roof, LEGO will not make a solid roof, but use enough support pieces to make it stable enough. An AFOL will, on the other hand, make a solid roof and not leave any space open in the design. This makes our creations sturdier, denser, and above all, much more expensive. 8) 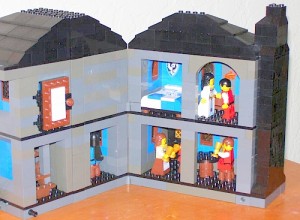 This Bullhead Tavern MOC has a solid roof, through and through.

So what happens when we only have one set to build with? What can we do to get the full effect with the pieces available? The following sections will help put you in the right frame of mind to accomplish a good build out of one set. 🙂

Before starting a project like repurposing a set, make sure to organize the pieces in ways that fit your building style. You could organize by color, by function, or by your own set of criteria. Organizing will give you a clear idea of what you have to work with and encourage the use of as many pieces as possible. 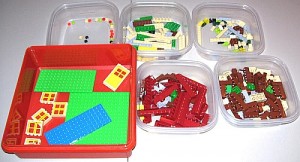 Many of our creations are made to be seen from multiple angels. However, if you limit the direction from where it will be viewed, you can extend the possibilities of a limited set number of pieces. This is a common technique in the film industry. By controlling the view of the audience you don’t have to build fully. 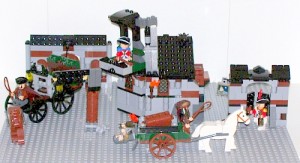 This is The London Escape set rebuilt to be seen only from the front.

Having things that work is an awesome accomplishment for any LEGO creation. Of course, functionality usually calls for more pieces. Therefore, when you reduce the functionality of a design you will typically use fewer pieces.

This is a simple cart, much simpler than the cart built in the London Escape. 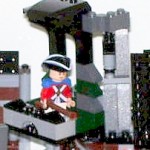 This balcony may look nice, but it can’t withstand much pressure.

AFOL models can withstand a good deal of jostling. Take this away and you’ve now created a surplus of parts for yourself. Many times when you repurpose a set, it’s more important that it looks right rather than if it will stay up. 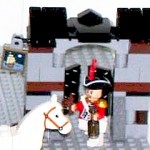 This storefront is very simple, but has the painted tile as its detailing.

One of the most interesting things about an AFOLs’ creations are looking at the details. Often they will spend much of their time making sure everything meets exacting criteria. When repurposing a single set, you will not have that luxury. Therefore, only detail the pieces that are the main focus of the set. The rest of the set should only roughly approximate things. This will further focus the audience’s attention to where you want it.

Many sets will have pieces that stand out. Often these are the minifigures, but they can include LEGO elements that break normal designs. These pieces should be given the greatest priority. They will give builders a focal point for whatever you build. Consider the treasure-room with the prize-gem or sword in the center. This takes up all the attention and makes you forget that it is the only piece of treasure in a virtually empty vault. 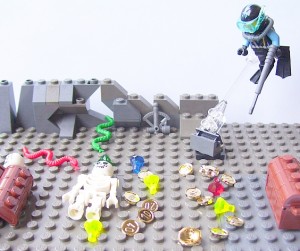 This last suggestion is something we all try to do in every creation we make. Put simply, it asks, “Can we find new ways to use LEGO  elements?” . Repurposing a single set is a good exercise in discovering these uses. Faced with a situation that limits elements availability will often result in spontaneous ingenuity. 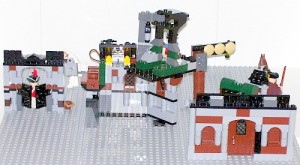 The back view shows how messy a repurposed can look from the wrong side.

The reasons why you would repurposes a single set are numerous. The difficult part usually comes down to doing it successfully. The main principles presented here all focus on two things. First, is the piece necessary and second, does it bring focus to my design? In fact, if you are not sure about something you’ve built and you’re conserving pieces, ask yourself those two questions. Chances are they’ll come in handy even when you’re not conserving. 😉 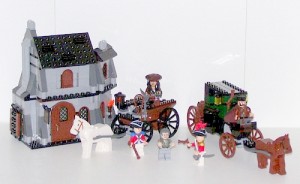 This is LEGO’s original design for the London Escape.