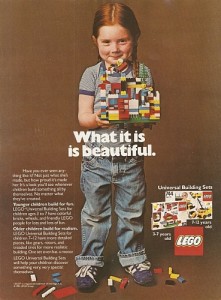 The World of Female LEGO Fans – Part 1 is Sarah’s research project and baby (please go here to contribute and/or follow the discussion). However I could not help but share of what I have found today. I guess the topic of boys, girls and LEGO must be in the air! 😛

Fast Company (one of the most progressive business, technology, economy magazines in the world) has published an article on their website from contributor Belinda Parmar (aka. “Lady Geek“). The article is titled; Sugar & Spice: Unearthing the Gender Divide

The reason I found this article so interesting is because throughout her post she uses LEGO as an example of an archetypical toy for boys. That doesn’t stand very well with me as a female LEGO hobbyist! She starts out:

Would girls really opt for pink (a color considered highly masculine up to the 19th century) and boys veer towards the LEGO-aisle if the world didn’t continually tell them they were hard-wired to do so? The nurture/nature debate is as old as the sexual differences that spawned it, but with two young children of my own (one boy, one girl) who seem to conform to gender-type in spite of my encouraging them to make their own choices, I have begun to wonder just when (and why) sexual differences persist.

Then she turns to Professor Simon Baron-Cohen, a world expert on what makes boys different from girls. Here is part of their conversation:

I have a five-year-old boy and a three-year-old girl, and despite raising them the same way, they’ve turned out completely differently. How can you explain this?

In tests, on average boys show more interest in games like LEGO, and girls are more interested in dolls, acting out social stories where they inject emotions and thoughts into the plastic figures. LEGO is just one example of systemizing; this is the drive to build or analyze a system, which is simply anything that follows rules or patterns. So you are looking for consistent repeating patterns, and boys on average seem to show a stronger interest in systems, whereas girls develop social skills more quickly. I talk about this in terms of empathy, which is the drive to identify (and respond to) someone else’s thoughts and feelings. The systemizing/empathizing theory is a new model for characterizing typical sex differences.

At school I hated science but loved drama and languages. Does this make me an “empathizer?”

These profiles don’t describe all boys and girls, and you can’t pre-judge the type of mind an individual has just by their sex. Whenever we try to profile people we use a range of measures, not just what toys you liked or what subjects you enjoyed, but it does sound like you had a natural tendency to be drawn to people, rather than to the mechanical.

So how should we approach the differences in the sexes? Should we challenge them or accept them?

Well, these are tough decisions. In general it’s good to give children as wide a choice as possible, and there is no harm in encouraging children to play with “typical” toys for the opposite sex. But whether we should be trying to change children is a more ethical decision; I think we should be supporting a child’s interests, whatever they are.

You can read the rest of the article here; Sugar & Spice: Unearthing the Gender Divide

As a female LEGO fan I found the article interesting in itself, (also the post at Smithsonian that traces the color pink through history as a mostly boy-color), but the fact that LEGO was repeatedly referred to as a boy-toy was disheartening.

I guess the LEGO company hasn’t been doing a very good job at establishing themselves as an at least gender-neutral toy in the minds of parents, or even world-renown professors who study such things. 🙁

” What about Belville, and Scala?” you may ask. Well, from this article at least, it doesn’t seem like they had made much of an impression in balancing out LEGO’s one-sided gender image. We will see if this image will change at all with the new “Friends” line from LEGO coming out next year.

As a female LEGO enhusiast, what do you think? (Okay, guys, are welcome to share your opinions too!) 😉

Oh, and here are some convenient links to other posts in this series: