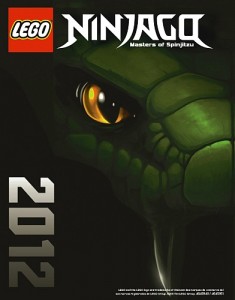 In this post I will list all of the sets in the LEGO NINJAGO theme. Please note that the images are not yet available, so I will describe them here as much as I can to give you a sense of what the sets look like. And if you are interested in the current selection of LEGO NINJAGO sets go here: LEGO NINJAGO

There is an overall new angle on the 2012 LEGO NINJAGO sets; the badguys are not skeletons, but snake-people. There are some amazing new minifig headgear, armor pieces, accessories and really cool lime-green cobras. One other nice piece is a 1×2 brick with brick-like façade. City and castle builders will love this!

There are 7 new sets revealed, 8 new spinners, 3 booster packs. The spinners themselves have an unusual attachment or insert – I’m not sure what purpose it serves; maybe it makes the minifigs more stable in the spinners? 😕

And that is the 2012 news for LEGO NINJAGO! Although I find the whole theme rather confusing (ninjas and choppers, and snake people???), but it seems it is popular with kids. I do find the theme exciting for all the minifig accessories and other unique elements, so I will definitely get some.

How do you like the new LEGO NINJAGO sets? Let me know what you think! 😉