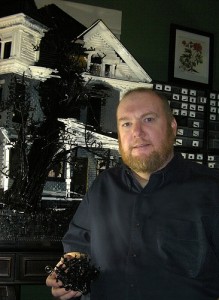 Today I’m going to introduce you to one of the most unique LEGO-builders I have ever come across. This LEGO-artist (and I mean really a true artist) is Mike Doyle.

Mike shocked the LEGO-fan world a year ago with a totally unusual and different kind of MOC. He called it “Two-Story with Basement”. This was Mike’s very first LEGO creation as an adult, and his first in a series of LEGO-built abandoned houses.

LEGO-fans were stunned by the realism and organic nature of Mike’s LEGO art. Since then Mike has added two more houses to the series. Each time LEGO-fans could not believe their eyes! Mike’s sculpting with LEGO bricks is beyond magic! 🙂

“Some ask if LEGO brick-building is Art. To me, that is like asking is sculpting with clay, Art. Well… it could potentially be. Anything, absolutely anything can be made into Art in the right hands, even the ‘child’s toy’ Lego. In the end, bricks are a medium, like oil paint or clay or pixels on a screen. It’s what you do with them that matters.”

For Mike LEGO is a medium of expression. His focus is on conveying a message, rather than just building something out of LEGO. Mike also approaches LEGO-building in a very different way then most LEGO-fans. His creations are meant to be viewed from only one angle; they do not have finished sides or backs. They are, in fact, created for one purpose only; to become mediums of a single great photograph.

“I think of the work as a two dimensional (or perhaps 2 1/2 D) piece. That is, I look to create the best single image possible through a photograph rather than a full model that looks good from all angles. I use the depth that I have through a 3D build to give the photo more life. So, rather than build a 3D model that gets photographed, in my mind, I design a photograph that is built in 3D. The difference here is that all the visual energy and decisions are focused on that single ‘best’ view that will ultimately be my photograph. In this way, everything I add to the piece can be positioned to look best for the photo.”

Once the sets are built and photographed, Mike dismantles them and sells chunks of his creations along with the photographs – a very different approach to the LEGO hobby in more than one way. (Mike’s prints are available here: Limited Edition Signed Prints by Mike Doyle)

“These limited prints come with a signed, numbered and stamped certificate of authenticity, a note that I’ve written about the piece that has some more background information on it ” *

Another unique feature of Mike’s LEGO creations is that they are in fact built to look like black-and-white photographs. To achieve this effect Mike only uses black, white, and shades-of-gray LEGO pieces.

“In this series, I am most interested in textures and the effect of layering textures over each other. To this end, the absence of color helps the viewer to focus on just this. Lego colors tend to be pretty harsh and unrealistic for my tastes, so I stick to black/white and grays. Without color, we dive right into form, which is where I want you to be.“

So, without further ado, I will show you Mike Doyle’s three now famous LEGO-creations. I will also insert quotes from Mike, as his thoughts on the creative process and his creations are deeply philosophical. (You can enlarge any of the images below by clicking on it.) 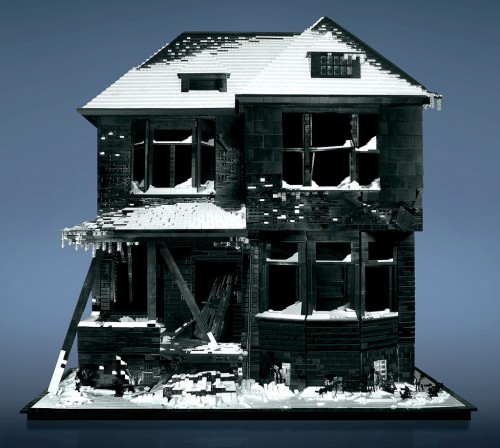 “I really love seeing things under or through other things. There is a certain magic to it. Here, we have rotting, degrading substructure under the shingles (which have fallen off). This is a cause and effect technique. I’m a big fan of showing (or implying) before and after in a natural way. It’s story-telling, really. It also is engaging – it draws the viewer in to ponder what has happened. Now, this technique is different than showing the action or act. The action is implied (in this case, gradual decay of house through winds and harsh weather).” 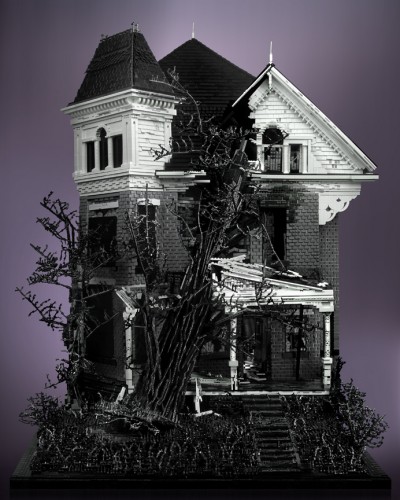 “I find that the experience of seeing a deteriorated house (or any familiar object) interesting. When looking at the image we see a dual image of the house – one as it is, and one as it was. You see a huge hole in the side of the house not just as a hole, but also as an interruption of the known. And so the mind seeks to recreate the known. We fill in the holes. We project. Our eyes follow the angle of the broken awning to a point, now destroyed, and we can feel the mass that was of the front 3rd floor. The same with the porch covering. This visual duality – the mind flipping between destruction and pre-destruction – is magic. It’s entertaining and engaging.” 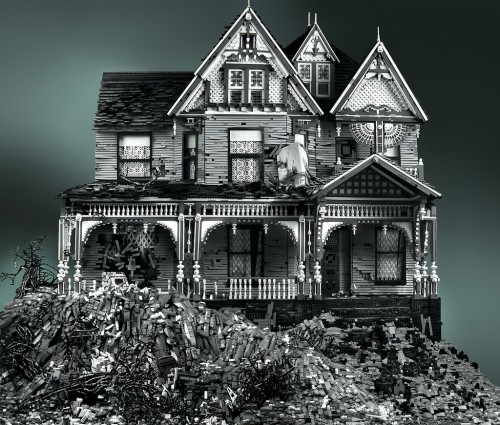 “The third installment of this abandoned house series continues its textural exploration of decay with a Victorian home engulfed in mud. The mud travels through the first floor, tears down a front wall and oozes over the porch side, taking with it household contents of convenience. This detail opens the piece up, allowing the eye to travel the surface of the house and then back through the porch, into a room and back out to survey the piles of garbage. The play on depth here is something I enjoy as one has a glimpse of the activity behind this architectural scrim.“

In real life Mike Doyle is a graphic designer, working with a design agency in New York city. He is married, with two boys. Mike rekindled his childhood love of LEGO after a visit to LEGOLAND with his family.

“I went back to my hotel room (after visiting LEGOLAND) and immediately began to look online to see what was out there. I wasn’t sure if adults were building with LEGO or if people were photographing them. Boy, was I surprised to see the incredible work out there! I had no idea. Suddenly, that little car I made (at LEGOLAND) seemed so trivial. But I also saw – through these works – just how far this could be taken. It seemed like there were no limits.”

If you would like to see detailed images of Mike’s LEGO art, or follow his thoughts on the LEGO-building process you can visit him at these various online venues:

*UPDATE: Chunks of the models are no longer included with the purchase of prints. Please see message from Mike Doyle in the Comment section below.