A couple of weeks before Thanksgiving, some LEGO VIP members got an invitation in the mail to enjoy the LEGO Brick Friday deals a week ahead of time. I was one of those lucky members and it was wonderful to get an invitation. It felt great to be appreciated as a valued customer and I began to wonder if there was going to be a special surprise. 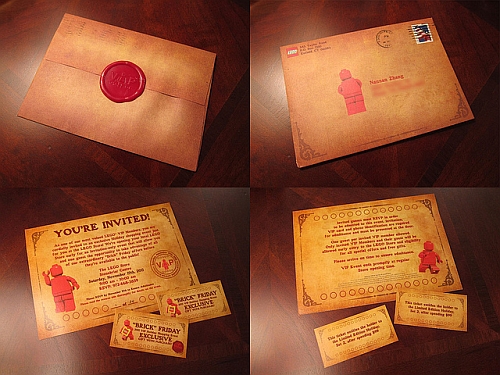 The event having come and gone, I’ll tell you that my feelings are mixed. On the whole, I am happy to have been able to go. I would definitely go again next year if invited, but I won’t be as excited about it. Here’s a run down of some of the good things about the event and some things that I was disappointed about. 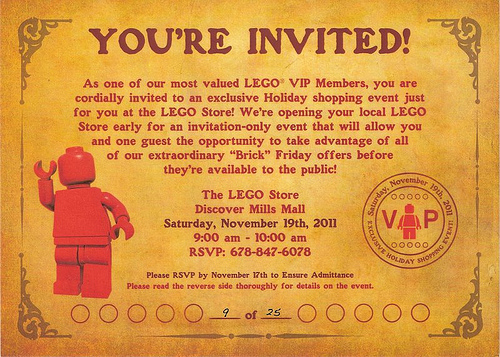 On the brighter side, it was very nice to be recognized as a valued customer. LEGO is really trying to ramp up the LEGO VIP program and I think this is a great step in the right direction.

It was definitely more convenient to go on Saturday morning instead of Thursday at midnight. Now I could enjoy my Thanksgiving without having to stay up to midnight, wait in the cold and rush to get into the LEGO store.

While I was hoping for a great big surprise, I had to settle for an extra holiday pick-a-brick box that I got to fill up right then and there. That was a nice little surprise. Thankfully, there were some new pieces in. Otherwise, I might have been more disappointed.

Last but not least on the positive side, I got to socialize with other fans. I already knew a few people that were invited because they belong to my local LEGO club, but I got to meet a few new people while waiting in line. And hopefully, they’ll join us for our next club meeting. 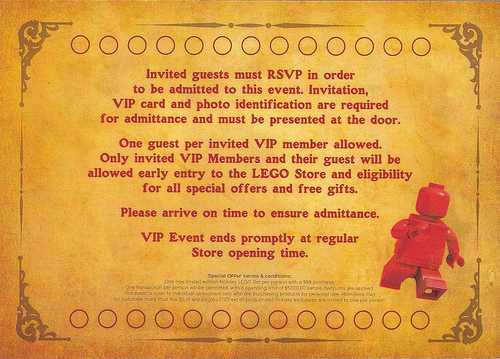 On the disappointing side, for being a valued LEGO VIP customer, I was hoping for a better discount. Only one person got 20% off; everyone else got 10%. It would have been great if they had done something like a flat 20% off to everyone or a specific set of scratchers that had a higher percentage rather than getting scratchers pulled from Brick Friday’s batch. Now, as it stands, those who went on Brick Friday had a better chance at the higher percentages since we used up about 40 of the 10% offs.

Here’s something that LEGO needs to know – one hour was not enough time. I remember spending almost two and half hours last year. For this special LEGO VIP event, we had only an hour to shop and buy. Thankfully, the store manager said that as long as we were in line by the end of the hour, we could still make our purchases. 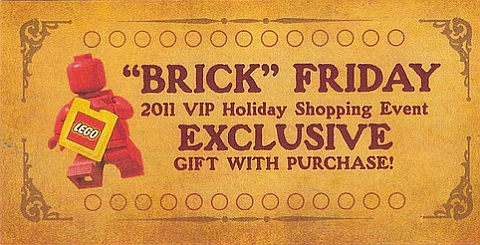 This next one is something that probably didn’t happen in all LEGO stores. I wasn’t expecting there to be grab-bags so those were gone in an instant. I literally walked right when I should have walked left. And in the time it took me to get over there, they were all gone. My fault really, but it was still a disappointment.

One last thing that bothered me is that there weren’t many sets on clearance. Last year, there were a lot more. This isn’t really big in the whole scheme of things, but it made me feel like I wasn’t getting a very good deal. And isn’t that what Black Friday is all about? Getting a good deal? 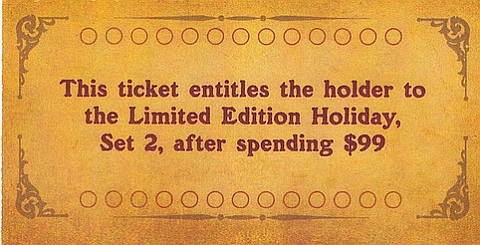 All in all, I’m sure it was a success for LEGO. There were certainly people going crazy on buying even though they only had 10% off. Just goes to show there are still a lot of shoppers who don’t care about getting the best price. As for me, I bought some because I wanted another #10193 LEGO Medieval Market Village for parts and that second bonus holiday set. 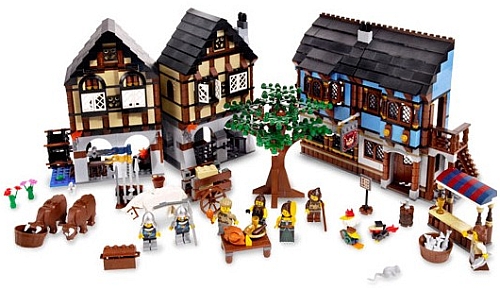 My advice to fans that want to get invited next year – give LEGO feedback! For this year’s event, the 25 LEGO VIP members chosen for their local store was based on engagement and purchases since joining the LEGO VIP program and being part of the top 5% of LEGO VIPs globally. LEGO may change this if they do the early Brick Friday next year. Just in case they keep it the same, my advice is to email or call LEGO. Let them know what you like, what you don’t like. Feedback equates to getting things more the way you want it and maybe, just maybe, you’ll be rewarded for it.

Now I’d like to know who else got an invite and what you thought of the event. Please post in the comment section below, talking about your experiences at your local store. Did you like or not? Was it exciting or disappointing? Let us know, and don’t forget to let LEGO know! 😉