Check out the LEGO Superheroes Superman on TV! The old-fashioned TV set itself is awesome, featuring the iconic image of Superman flying over the Metropolis for a rescue. Then there is the nicely done city skyline and those fluffy clouds made from LEGO ice-cream scoops! 😀 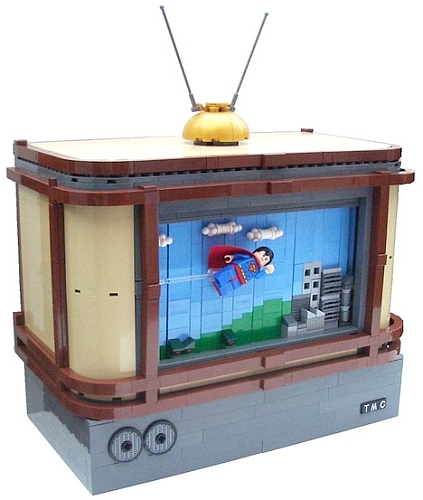 But wait! There is more! This is not just any ordinary LEGO set with our LEGO Superhero on TV! The backdrop behind Superman actually scrolls, which makes it look like Superman is really flying over the city! Yeah, you weren’t expecting that, did you? Here is a video of the TV in action:

Rod Gillies (a.k.a. 2 Much Caffeine), the engineer behind this masterpiece says that the backdrop is built of alternating 1- and 2-brick width columns, mounted on a loop of LEGO bulldozer-treads which allows the screen to scroll. I would love to see the inside of this thing! What do you think? 😛

If you would like to read more about the newly released LEGO Superheroes line, check here:

Next post: NINJAGO Rise of the Snakes – the story…