LEGO video with a sweet story to tell…

LEGO stop-motion videos (also known as “brickfilms”) are a labor of love. Each movement has to be photographed separately, and the thousands of pictures need sorting and editing just to create a couple of minutes of video. Definitely not for the faint of heart!

But when your heart is filled with love anything is possible! Just check out this sweet LEGO video from Walter W. Thompson! He put it together to propose to his girlfriend, Nealey. Awww… I know! 😛

Each of the scenes in this LEGO video are actually part of Walter & Nealey’s story. Here is how Walter explains it:

“Basically, Nealey and I have been dating for just over 4 years now. She is a freelance food writer and blogger, and I am a photographer/filmmaker. More often than not, I shoot the pictures that accompany the recipes she is required to send in. We’ve had an ongoing joke for over a year now where I’ll sneak a LEGO minifig into a few frames just to see if she notices. She always does, and gets a good laugh out of it. I’ve been buying LEGO a la carte on eBay, and my collection has been growing steadily over time.

When it came time to propose, this was most personal ‘proposal idea’ I could ponder up. All outfits and food items are actually a part of our story. As a side note I should also mention that in a ‘chop-busting’ effort, Nealey had mentioned in the past that I had better put on a production when I asked for her hand, as it was taking me so long to ask and all…

She was pretty shocked as the video was playing, and it took her about 10 minutes afterwards to say ‘yes’ because she was asking 20 questions about how I made the LEGO video. It was pretty funny thinking back, although most of it was such a blur!”

Here is Nealey’s version of how it all happened:

“I dusted off my apron as Walt pointed in the direction of the television. A DVD sat on top of the player; he instructed me to put it in and press play. As he reached for my hands and pulled me close, I could feel the loud thumping of his heart. A LEGO man donning shaggy blond hair and denim overalls waddled across the screen. It just so happened that Walt was rocking overalls the day we first met. I looked at him and looked back at the screen. A cute brunette decked out in orange and blue strutted by. I was speechless. LEGO Walt paused a moment, contemplating life as a bachelor or life with me. You can probably guess by now which he chose…

The movie continues, documenting our ever-changing world together: I attended culinary school and discovered my passion for cooking. Walt fell in love with the camera lens and has been following me around ever since. A montage of various LEGO foods slid by (each with an inside joke attached, all the way down to the buttermilk), so when a ring zipped across the conveyor belt I almost fainted. The final act reveals a beautiful LEGO bride, and the wedding commences with all of our best LEGO friends in tow. I mean; what’s a wedding anyways without Indiana Jones and Godzilla!

The next minute Walt dropped to one knee as ‘will you marry me?’ flashed across the screen. He opened the box to reveal the same LEGO bride and groom; the groom holding the ring, of course. It was quite the proposal, as you might agree. It was just so Walt. And so us. If you know anything about stop-motion video you know it was truly a labor of love. Needless to say, I said YES!” 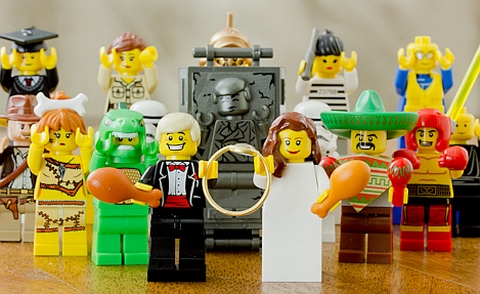 Congratulations Walter & Nealey! May you continue to have a wonderful life together! For our readers; you can check out Walter’s photography website here: Firepit Pictures, and Nealey’s cooking blog here: Dixie Caviar. You can also watch the original LEGO video here: A Proposal in LEGO Stop Motion on Walter’s Vimeo channel, Firepit Pictures. If you would like to watch the HD version check here: A Proposal in LEGO Stop Motion HD. And if you would like to leave a note for Walter & Nealey, you can do so in the comment section below, or visit them at their websites to say “hi”. 😉